Anansi the Spider XVII and Aso

"I can't wait to ascend to my TRUE status as a Goddess of Storytelling. I've got more than a few tales I'd like to spin."

"I can shoot webbing from my wrists... it's pretty strong stuff. Makes getting around easy. I can also turn into a spider whenever I please! I'm about a foot long from head to thorax, and pretty cute, if I say so myself. Well, cute, but also venomous."

"Oh, eventually, I suppose. I'm not picky... my ideal other half is anyone who cooks well and doesn't mind posting bail."

"Some call me a bit of a troublemaker. They've got it wrong, I tell you... it's the trouble that follows ME, not the other way around!"

"Mythology. Who doesn't like class credit for reading stories?"

"History, the only class that can make fairytales boring! Plus, why history? Why not herstory?"

Anyone who's willing to listen to her babble, tbh.

Adanna Anansi is a 2016 introduced character descended from Anansi the Spider, the God of Storytelling from West African and Carribean folklore. She is an international exchange student from Anansesem High (where her father has tricked the school board into naming the school after him).

A trickster and a prankster (and a very vocal advocate about the difference between the two), Adanna eagerly awaits the day she can take over her father's legacy of spinning tales, tricking her fellows, and stretching the truth. Determined to ensure her own destiny, Adanna supports the Royal philosophy, in spite of her rebellious attitude and lighthearted nature. Above all, however, she enjoys the story of Royals vs. Rebels, and is determined to be in the thick of it.

Prior to becoming an exchange student at Ever After High, the most difficult choice Adanna had ever made was deciding whether she had a better chance at pranking her father with a calabash pot or a water-basin. She had a very light-hearted childhood filled with practical jokes, her mother's cooking, and bedtime stories galore-- each one, of course, exaggerated immensely to suit her father's telling. Every day, she would trick the other children into completing her chores for her... and, naturally, she was praised for following her destiny by doing so.

Subsequently, other students may find Adanna's maturity somewhat lacking. She plays pranks and tells jokes at inappropriate times, often terrifying arachnophobic students with her alternate form, a venomous spider roughly one foot in length (she considers this "small" for a spider, though other students may disagree). She often can't tell if a joke has gone too far, such as when it places people in actual danger, and she has a hard time apologizing or admitting that she's done something wrong.

This being said, however, Adanna is a fantastic storyteller with a great sense of humor. Loud and often boisterous, she is the life of the party-- she can make anything interesting, even a story about something as simple as going to buy groceries (though at times, she stretches the truth to do so). She is highly expressive, with a seemingly boundless energy and one of the heartiest laughs there ever was. Though she sometimes takes her jokes a step too far, she never does so with intentional malice-- she only ever seeks to entertain people or make them laugh.

Adanna is something of a technophobe, in part because she very strongly feels that MirrorChat and Hexting is only a weak fascimile of face-to-face interaction. She is very dissappointed that the MirrorNet is her only way to contact friends and family back home, and sometimes takes out her frustration by complaining to anybody who will listen... which is usually whichever unfortunate member of the Tech Club has the honor of repairing her computer that day.

(It isn't her fault that it keeps breaking. Spiders tend to catch a lot of bugs.)

The one matter that Adanna takes seriously is her destiny. She has been waiting her whole life to become a Goddess of Stories, and she is genuinely afraid that it will not happen if other people from her tales decide to go rebel, especially because her ascension is dependent on others playing into her (admittedly predictable) tricks. She will do almost anything to prevent the fablefolk back home from hearing that there even is a royal vs. rebel conflict.

Adanna is extremely tall, teetering at an impressive 6'1". Though her torso seems to be of average bearing, her limbs appear to be unusually lengthy and unusually skinny. The dark complexion of her human form is typically free of visible blemishes, though she suffers occasionally from mild eczema on her inner knees, and she wears her hair with bangs straightened in eight braids (no more and no fewer). Her nose is long and narrow, though cutely rounded at the end, and the playful twinkle ever-present in her eye seems to almost match her cheeky grin.

Her spider-form is roughly a foot long from head to thorax, and her legspan even longer. She is fuzzy all over and seems to match her human form's hair color.

How does Adanna come into it?

Adanna's father, known widely as Anansi XVII, is actually the 102nd heir of the Anansi the Spider fables, known in some places as Anansesem. When she was born, Adanna was proclaimed to be the 103rd heiress.

Despite being born after her father's ascension to godhood, Adanna is still technically mortal, having yet to complete the trials set forth in the original myth. Though she passes it off with a bluster, claiming that she only wants to be a Goddess for the sake of renown, in truth, she comes from a family of immortals, none of whom have ever died. The prospect of losing her destiny is terrifying... especially because that means she might be the first member of her family to face true mortal death.

There are many among her classmates at Anansesem High who would leap at the chance to shrug off their destiny. Adanna, as a Royal, only wants to make sure that none of them ever hear that they even have the option to rebel, certain that their rebellion will doom her to mortality and her eventual death.

Her father, Anansi XVII, considers her the apple of his eye, his ultimate pupil in all things related to tricksters and folklore tales. Their prank wars are infamous, and Adanna is more than happy to take the fall for a joke, especially if it's one being played by her father, whom she idolizes as the ultimate trickster.

Her relationship with her mother, Aso, is somewhat tense as it is her mother's opinion that she needs to stop fooling around and begin preparing for the real work of spinning stories. And, by the way, why has she not found an appropriate spouse yet? It doesn't help that Adanna's father seems to encourage her freewheeling behavior and immature pranks. However, when it comes down to it, her mother loves her very much and just wishes she would act more her age. Aso Anansi is also the 5-year reigning champion of their local Cook-Off Contest.

Adanna has seven significantly younger siblings, the oldest of which is only nine years old and the youngest of which is barely past a year. Their favorite prank to pull on her is to sneak up behind her and tug her braids in different directions.

Adanna is descended from a long, long line of Gods and Goddesses of Storytelling, though most of them are retired now, choosing to spend their everlasting life playing tricks and telling stories from "back in my day." Her multi-great grandfather, the original Anansi, is still around and ruling over the distribution of stories, just like he always has.

In addition to these members of her family, Adanna also has a Great-Aunt named Nancy, who rules over a particular section of folklore. She very rarely gets to see her, but whenever Aunt Nancy visits, she always brings the best gifts.

Adanna is positive that she'll make some friends at her new school soon. She considers herself quite charismatic.

Princesses usually have birds, but Adanna has a pet fly, named Limbani. Much like Raven Queen's pet Nevermore, Limbani can change her size-- except on a much smaller scale, from a normal fly's bearing to roughly the size of a fist. She is, additionally, unusually strong for her size, capable of carrying roughly seven pounds of material at her best.

Her enormous eyes, mandibles, and slightly-sticky feet seem to oddly upset some of Ever After High's students, but Adanna thinks she is cute enough to (almost) eat!

Though her mother hopes that she'll learn to take things more seriously and settle down, Adanna's not exactly leaping at the chance for romance. It's high school! She has ages to settle down, and is more concerned with having fun for now.

However, this isn't saying that she'll automatically turn down any requests for a date. She thinks that it could be a fun experience... or, at the very least, a good story to tell. Who knows? Ask, and she might just surprise you.

None (yet), but she's bound to rub a few people the wrong way. You win some, you lose some.

Adanna has a clothing style that she knows works for her, one that shows her best. She can usually be found in one of several jumpsuits with solid, unpatterned colors. Being from a warmer climate than the one typically found at Ever After High, most of her present shoes are sandals, though she does own one pair of close-toed, knee-high boots that she wears in the winter (and will probably never wear again after she goes back home).

She always, always accessorizes with some article of clothing that's brightly colored and uniquely patterned. Her scarf collection is extremely impressive, even though she claims that she didn't even bring half of them to Ever After High.

Her jewelery is typically something chunky and gold, sometimes inlaid with colorful gemstones or beads. In spite of this, she does not ever wear any kind of earring except for small golden studs. According to Adanna, this is because of a hilarious incident with a hoop earring and one of her braids at a middle-school dance when she was twelve, but the details of the incident are questionable especially because she allegedly "knocked the punch bowl directly into the Principal's face" at some point in her struggle.

Some of her clothes are made from spider-silk, and most of those among them she designed and spun herself. She does, however, have a very warm and comfortable mantle spun by her mother, who was concerned that she would "catch cold on that exchange-student trip." 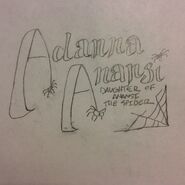 Name placard for Adanna
Add a photo to this gallery
Retrieved from "https://everafterhighfandom.fandom.com/wiki/Adanna_Anansi?oldid=268316"
Community content is available under CC-BY-SA unless otherwise noted.