Neutral I dunno. The idea of committing die almost as soon as I graduate school seems kind of...crappy? But then again I'm a little too young to get involved with this stuff so I'm more of a sidelines dude.

I just really want to contribute to this world in some way, I want to be known for having made a difference in some field that matters. I really don't want my legacy to be sleeping in a King's bed for a day and then being thrown into the woods for animals to vore, yknow?

The really really great thing about being destined to die is that you're effectively immortal until then, which is pretty sick if you're like me and you only have one braincell.

if I have to sit through one more Geogrefairy lesson...so help me.

Missing an eye, the one eye that he does have is round-ish and a light periwinkle colour. Neutral olive skin, leaning towards pink-toned, not tanned but not pale. Often features a soft flush, tans easily but burns after too much exposure. Light brown/dark blonde hair, dyed dark purple. Rather bad at maintaining the length of his hair and it often goes unchecked for extended periods of time. 167cm, 57kg. Thin, not done growing, still has baby fat in his lil cheeks, the kind that you just want to squish. Very endearing soft face, the type that aunties would grab and say "oh, you're growing up to be so handsome!" Bone structure suggests that in a few years, Aisley may have a nice jawline and cheekbones, but that remains to be seen.

Despite still being soft due to the lingering signs of his youth, Aisley smiles in a rather sinister manner most of the time, whether this is on purpose or has to do with his inherent villainous tendencies.

Their love story was an awkward one, and it's still sort of debatable how healthy and compatible their relationship was. 'It's awkward to find yourself helplessly in love with the one person who won't date you' is probably something Linden said at some point. His attempts at flirting with said only person who wouldn't date him, Mei Li, were in short, fruitless. If anything, they made their relationship worse.

They never ended up dating in highschool. They became something like friends, Linden winning Mei Li's favour over with chocolate and flowers, and then losing it by invading her personal space or saying something dumb. It wasn't until after a class reunion five years post-graduation that Mei Li actually decided to be friends with Linden.

Linden's family business was going well, but it was shady and he wanted to remove himself from it. Mei Li's small self-owned-and-managed business was also going well, and it was completely honest and she needed some new employees that she could trust. After a bit of investigation in Linden's character, Mei Li hired him for the counter of her shop, in which charms, potions, potion ingredients, crafts, spellbooks, hexes, jinxes and enchantments were sold. He turned out to be very good eye candy and boosted her sales by means of being very pretty and attracting customers.

Eventually, after around two years of working together and re-familiarising themselves with one another, Mei Li returned his long-standing affections. After two more years they got married, and had a child around half a year later. They were perfectly well and happy with that child- Aspen, but then lo and behold eleven years later, there was yet another. They named this child "Aisley".

Now, it was rather unclear at the time whether or not Aisley Hazelwood had inherited a destiny. His sister, when he was three and she was fourteen, received a letter from the prestigious boarding school, Ever After High, informing Aspen that she was to be the next fertility witch in Thumbelina. Linden was highly worried that Aisley had received his destiny, a fear that would later be confirmed, although Linden would not be around when it was.

When Aisley was a little under four, Linden died of what were said to be "mysterious causes". Nobody really knows what exactly killed him, but it has been pinned down to "destiny", as the stepmother in Little Brother and Little Sister is a widow, and Linden's death did indeed leave Mei Li a widow, although earlier it had been assumed that it would be Mei Li, that died, as it was usually the spouse of the stepmother's child that died for the story. That was the first sign that the story would play out.

Then, in unfortunate series of events, when he was eight, a cab that Aisley was in. Thankfully, Aisley didn't die, however he was left with a large amount of cuts, the scars of which, although quite faint, he does still have. I'd like to say that these were the most pressing of his problems, but an amount of glass flew into his right eye, and the only way to remove the glass once he was rushed to hospital was indeed to remove the eye itself, which was in any case irreparably damaged.

It wasn't any surprise, that when Aisley was fourteen, he'd received a letter for Ever After High.

Benvolio appears to be a carrion crow of unknown age, but he claims to be a man who could not make good on a deal with one of Aisley's dead ancestors and was cursed into a bird, bound to look after the Hazelwood family until his debt was paid off. Unfortunately for him, being a bird, he's not super capable of looking after a family of witches and the debt paying is slow. He's not entirely sure how long it's been, but he hopes that with the amount of trouble Aisley puts him through, freedom can't be far off. Ah, at least he's immortal until then (supposedly, he's never felt the need to confirm).

At the moment, his role in Aisley's life is something of a mix between his babysitter and grumpy uncle. Benny tells Aisley off regularly for doing Stupid Things, and Aisley tells him to shut up and watch how cool he is. On the occasion, Benny will engage in shenanigans as well, provided that he knows he won't get in trouble.

He says that he would sell Aisley to Satan for one corn chip. Whether this is true is yet to be seen.

He owns like six of them and they're all incredible adorable and cute and well-behaved and they follow him everywhere in a straight line, single file. He loves them to death and they are his favourite.

He will go to the ends of the universe to keep these cats happy. Touch them and he will hurt you with zero hesitation.

To Aisley, Min is nothing short of an idol. She's looked out for him since his birth and taken care of him his whole life. They grew up doing everything together and he developed an unhealthy reliance on her. Considers her his very best friend in the whole world and it's kind of sad, but their friendship is overall pretty wholesome.

he does his makeup v good A+

Pretty cool, kind of a wimp tho lowkey (i will speak more on this at a later date)

Aisley's feelings towards him are mixed, what with CC's sudden involvement in Aisley's life and his disgusting resemblance to Courteous. Even so, Aisley finds himself somewhat attracted to him, both in the platonic and physical sense. He has something of a squish-crush on CC and very little understanding on how to act on it, not that he really wants to.

His interactions with CC are mainly telling him to shut up or explaining which way CC's next clas is and then telling him to go away, although they do get along when in the same room doing their own things, which really brings into question whether they'd be equally content and happy doing things together when they've grown a bit closer. Aisley's aware that CC also uses him as a social crutch and follows him around somewhat annoyingly during school functions but at the same time he's happy for the attention.

For a while, Curt was something of an older brother figure to him. Like a really distant, much cooler than him older brother who was away at university overseas. And then the incident happened, and, well, his mother doesn't want him talking to people like that. Aisley knows very well that Curt is horrendous and crappy but damn if he doesn't miss him desperately at times.

She doesn't go to EAH but she and Aisley keep in touch over the internet. He absolutely adores her and usually you can find him sitting in the corner texting her when he's not busy doing something.

Their interactions are awkward. It's not great. He gets the sense that she does care about him, though.

Aisley isn't super sure about his identity or orientation but he does know that he thinks a lot of people are cute and scary.

Also he feels an odd sort of attraction towards CC, which he is only mildly aware and in denial of. 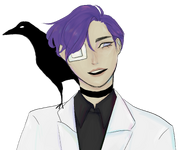 aisley bullies cc. save him.

summer aisley? sort of? a concept? 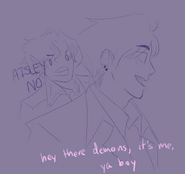 ft. rad (aisley's sense of self preservation is 0)

ahhhhhh finally an updated outfit design, we love that 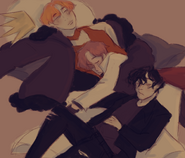 first time I drew him 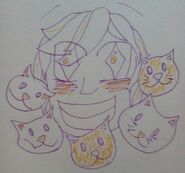 somewhat relevant i guess
Add a photo to this gallery
Retrieved from "https://everafterhighfandom.fandom.com/wiki/Aisley_Hazelwood?oldid=326479"
Community content is available under CC-BY-SA unless otherwise noted.