Alto Lute is the son of the Lute Player from the fairy tale of the same name. Alto is perceived to be somewhat of a hopeless romantic and a freak, purposely flirting with anyone he meets up with. It's only for fun though. Inherited from his parents, Alto is a natural musician that can easily play the lute due to compulsory lessons given from his mother. He didn't take a real liking to music until the latter years of high school (recently), but has now began song-writing and aspires to take on the music industry in the future. Other than that, he's also quite the jock and is an active member of the school's Bookball team.

He is a roybel, but has had a past of standing in the royals alignment. It was one day when his friends had influenced him to question his legacy and realise the questionable aspects such as having to marry a complete stranger that will be his damsel-in-distress - he didn't want that. However, he loved his parents and didn't want to upset them with his discomfort and decided to sit in the middle of everything and join the roybels.

The Queen / The Lute Player

Roybel. Marrying a complete stranger is kinda scary, don't you think? I love the other parts of my destiny though.

Imagine... me. On that stage. Playing the lute and singing. Everyone applauds. They'd love me. One day...

I can really work that lute. Wanna hear me play?

Hahaha... My whole life, I've been spitting revolutionary puns and jokes that could potentially bust your lungs, yet NO ONE acknowledges them.

Grimmnastics. This might be weird but I do kinda like being sporty and stuff, even if I'm not the best yet. I also love Muse-Ic, like?? I was born for that stuff.

A lot of people have come and go, but Drake and Jamil are my besties, currently!

He is fair-skinned and has a 'round' face shape with his chubby cheeks being the most prominent feature. He has quite big lips and a soft, plump noise. As for his eyes, they are honey brown and his hair is dyed purple with faded white ends. It was naturally blonde and it's generally in a messy state all the time, but he brushes it during special occasions.

How does Alto come into it?

The King and Queen eventually had a child who was meant to be the next Lute Player. However, they expected a daughter but instead, they got a son! They named him Alto which is a name associated to music. He is destined to marry his king or queen to continue the fairy tale.

(OLD DESCRIPTION) Matchiline is one of Alto's most enjoyable friends. Alto is usually the follower of Matchi and he obeys anything she asks him to do. Luckily, he knows Matchi isn't the type to manipulate someone, so he puts a lot of trust in her. Alto finds Matchi very cute because of her short height (not in a romantic way. well maybe), however Matchi doesn't think of him in a romantic sort of way either. It all started when Alto wanted to hug and squish Matchi because of her cuteness, Matchi said she'd let him if he bought her some pasta; so every time Alto bought her pasta, he'd get to hug Matchi. This led to Alto following her around a lot and they soon developed a close friendship together. They sometimes likes to sit close together, 'it is quite comfy' Alto says. Since Alto is the type to follow Matchi around, he often waits outside her dorm in the crack of dawn getting her morning pasta ready for when she wakes up. People have even mistook them for a couple a few times; Matchi, always trying to correct them but Alto just keeps them wondering.

old design, but i replaced this with a nEW CHUBBY ALTO

Altiline :') it came out blurry though rip 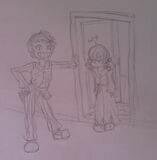 Blessing drawn by Hiddne im crying thank u so much

inspired from this image i found from the internet ;)) 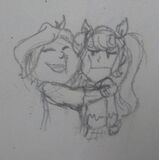 another blessing by Zena
Add a photo to this gallery
Retrieved from "https://everafterhighfandom.fandom.com/wiki/Alto_Lute?oldid=296331"
Community content is available under CC-BY-SA unless otherwise noted.