Start a Wiki
Anadil is a 2016-introduced and all around character. She is the daughter of Aladdin and the Genie.

Ahseala Kie. Thankfully, she's only around half the time!

I wish my parents would visit me more often! They barely answer my hexts to begin with.

I'm a sorceress, but that's not my limit. I have a gemstone that allows me to grant one wish per person. However, I may have an unlimited amount for myself...heh heh.

You won't believe how many times Sayla has caught me talking to my parents' picture. I need to stop doing that!

Hahaha. Did you say friends? Who needs friends? Despicable backstabbing scoundrels, that's what friends are.

Anadil is evil. Not evil, actually. Cruel. Terrible. Harsh. Demon-like. Every word she speaks is terror. Not to mention her pride, which can be her weakness. Of course, she doesn't admit to that...

It is not her destiny to be evil, but Anadil finds enjoyment in terrorizing and annoying people. Unlike some students, she is easy to get used to. Although she is not supposed to be evil (she's the daughter of the heroine, for heaven's sake), it was her born personality.

In truth she is probably a rebel. Not to be compared to the Evil Queen, whose evil knew no limits. Anadil knows better than trying to create chaos throughout Ever After, but she takes what she can get.

Since EAH is cluttered with phoney daughters and sons of Aladdin or the Genie, it's hard to get the necessary recognition she needs for people to realize she is the true heir to Aladdin's kingdom.

Anadil has a soft side for her parents, but she chooses to stay in control of her sad emotions. No one really likes her; why should they? She feels lonely at times, but for the most part, she's confident in her evil.

Anadil is very, very, very competitive. She has no desire to marry the child of some rich nobleman, even if it means a Happily Ever After. As a half-genie, she can transform herself and grant one small wish to others. However, she can grant herself wishes in an unlimited quantity. She can also undo most spells. She is a high level sorceress, but she keeps it to herself. She wears a blue amulet that grants her the powers she has.

These powers are not usually used for troublemaking but more as a tool of revenge.

Although it takes a lot of her energy, Anadil can enter the In Between and travel short distances. Since she is not fully genie, she does not use this power unless it is necessary.

Anadil has black curly hair that goes down to her mid-back. Her bangs and top of her hair are a dark blue. She usually wears her hair down, but will occasionaly dye her hair to its original black color and wear it in a bun.

She has dark red eyes with long lashes. Her lips are a red-brown color, and very natural. She also has lots of golden freckles dotting her cheeks and nose.

As for an outfit, Anadil doesn't wear much. She has a simple orange top with yellow in the front. She then has an orange skirt with lots of lace, gems, and beads. She also has a loose and golden belt, studded with emeralds and sapphires. The center gem is her amulet, which grants her the powers she has.

She also doesn't wear heels! She has either short boots with fluff on the top (think Epic Winter), or simple blue sandals.

Her makeup is also very light. She has a little bit of blush, and light red (no, not pink) eye shadow.

Anadil is the daughter of Aladdin and the Genie. She often criticizes the author of 'Arabian Nights' (more specifically, 'Aladdin' ) with in-appropriate words in a different language for not getting the facts right. The genie is not a boy. Anadil's father's one last wish: that he could marry the genie! Well, she was also in love with him. Anadil has no problems with this fact and actually encourages this.

Unfortunately, Headmaster Milton Grimm is completely against this and has given her a bad reputation amongst the students of EAH. Anadil doesn't understand why he doesn't have this same anger at Cerise Hood, whose secret was recently publicized.

Cedar Wood accidentally heard Raven talking to Maddie about it, and Blondie saw Cedar's worried look and asked if there was any juicy gossip she might know about. Of course, she had to say, "Yes," and welp~ that's that.

Every once in a while, Aladdin will visit EAH. In a recent RP, he can't come because his wife has lost the MirrorPhone with the TransLocation App.

This is one of the things that Anadil has none of. She does not want friends either.

After some epic dragon battles, it has been confirmed that Alicia Gross is Anadil's number one enemy.

Back at her old home, she had an off-on relationship with the son of a fruitseller at the market. He believed he was too poor to be with her, and so they were not always together. He did not have a fairytale so he was not sent to EAH. She has not seen him in three years. 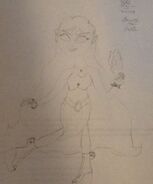 By Jade-the-Tiger with no background. 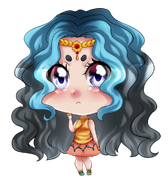 Official art by me

Headshot art by me

Old card art by me 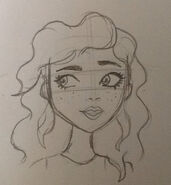 Headshot art by me

Some concept art for Anadil by me

Headshot wip (sorry for the lq image)
Add a photo to this gallery
Retrieved from "https://everafterhighfandom.fandom.com/wiki/Anadil?oldid=303325"
Community content is available under CC-BY-SA unless otherwise noted.