I'm hexcellent at pulling pranks, mostly because I can turn invisible at the drop of a hat. Speaking of hats, I have a special hat with parrot feathers on it that allows me to impersonate others' voices. It's pretty wicked. *smirk*

Rose is the only princess for me. She sees past my callousness and seeming inability to take anything seriously to my loyal, lonely heart.

Everytime I don't get away with a prank and Rose has to come bail me out.

Magicology; I love learning about new magic, especially if it can help me with my pranks!

Meet Andre Fairchild, the prankster wild-child of the Imp Prince. May the Fairy Godmother have mercy on his soul. If he weren't a Rebel, he would play the part of the Imp Prince in the story of the same name. He's a Rebel due to his relationship with Rose.

Why Should I Worry?/Oliver and Company | Don't Stop Me Now/Queen

Andre is, for lack of a better term... impish. He is constantly thinking up hair-brained schemes, pulling outrageous pranks and generally just causing mayhem and mischief. This behavior is aided by his hexcellent powers, namely invisibility and his voice-mimicking hat. He is not, however, immune to getting in trouble, and has spent many an afternoon in Dungeon Class-ic. He's not fairy good at taking things seriously, either; he didn't see what the problem was when the Book of Legends went missing, and for the most part thinks the world is one big Prank Party. Through his relationships with his friends, however, he's learning to take things a bit more seriously. And he does have some good qualities! He's loyal to a fault and would do anything for his friends, come hex or high water, And he can use his powers for good, giving encouragement to others when they're down and distracting bullies from their attacks on other students.

Andre is moderately fair skinned with slightly slanted, sapphire blue eyes, and unnaturally red hair. He has a thin, lanky build, noticeable most in his gangly arms and long thighs. His musculature is rather slight, with only his arms and legs being lightly muscled. When he doesn't use some of his inherent magic to disguise himself, he also has downward-facing pointed ears and iridescent fairy wings.

The Imp Prince is a fairy-ly low-key story that I found going through a list of Fairy Tales on Wikipedia. The story can be found here: Wikipedia's Page on The Imp Prince

How does Andre come into it?

Andre is the child of the most recent Imp Prince and the Fairy Princess from the story. He inherited his natural ears and wings from his mother. Unfortunately, he doesn't actually know much about his story, and in fact didn't even realize he had one until he got his letter to attend EAH; no one, it seems, had realized that neither he nor his foster parents realized just who his biological parents were, and hadn't seen fit to inform them that he was the next Imp Prince. It caused some tension between Andre and Rose shortly before they got their letters, as he thought she would be leaving him behind for Ever After High while he attended a normal high school for non-legacies.

Andre... doesn't actually know his parents very well. He hasn't seen them since he was very young; all he remembers is his mother's shining face and his father's kind, slightly impish smile. For reasons as yet unknown to him (though he suspects it was because they were dying), they left him on the door step of the de Beauté's home when he was very young, and he's come to think of Mr. and Mrs. de Beauté as his parents. He never quite saw Rose as a sister though...

Rose de Beauté is his oldest and dearest friend, as well as his girlfriend; he moved in with her and her family when he was just a nursery rhyme. Besides her, he is also friends with the Nutcracker kids Miriam and Charlie, as well as his roommate Arion Neptune. He admires Kitty Cheshire and her pranks.

He and Arion have bonded over their mutual affliction of "Disney Mom Syndrome" and their mixed-species backgrounds (Andre is part human, part Imp, and part Fairy, while Arion is part human, part Merman). Arion helps him understand why he should care about the Destiny debate and gain a deeper understanding of what it means to be a Rebel, while Andre helps Arion relax, loosen up and make friends. They didn't start off this mutually supportive, though! Their first interaction ever was when Andre played a (mean in hindsight) prank on Arion by spraying him with saltwater in the middle of a hallway; when Arion finally spoke to him again a full 3 months later, Andre profusely apologized and they started to make amends. Now, Andre feels as though they're as close as he and Rose are, and would do anything to help his brother-from-another-mother out.

Recently, as Rose has hexpanded her friendship circle, Andre has gained more friends by default. He enjoys the company of Fay Fairer immensely, thinking she's a rather clever girl. Once Fay met her destined prince, Airmé Arc-en-ciel, that bond of friendship hexpanded to include him as well.

He goes climbing with Reginald Cannery and Tina Castleberry every other weekend, just to hang out and have fun. He's fascinated with Regi's ability to turn into a bird at the flip of a page.

Andre, like his girlfriend Rose, has 2 pets; he's had them since he was a nursery rhyme. They are: a fox, named Frenchie, and a parrot, named Lutin.

Rose is his princess through and through. She helps him think through his actions and realize the consequences, even if he ultimately ignores them; and she's a helpful partner-in-crime for some of his tamer pranks. In turn, he helps her lighten up when the state of the world gets her down, and supports her passions and visions of a future where all Fairytales are equal and allowed to create the destinies they choose. They've been there for each other through thick and thin for years now, and changing the nature of their relationship from platonic to romantic hasn't changed that.

Headmaster Grimm seems to have it out for Andre, since he gets into trouble so often. Other than that, Andre's not really into being "enemies" with anyone. Not a whole lot of his peers LIKE him, per se, but none consider him a mortal enemy. Kitty Cheshire might be the closest thing; they've got something of a rivalry over who can pull the biggest prank. The competition has given rise to quite a few fairy-fails. 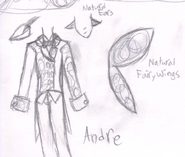 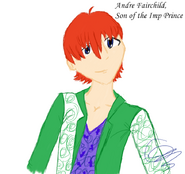 He's standing with Rose. As usual.

Smol!Andre is Smol. And punk.

Fairme with Friends drawn by Jade-the-Tiger; Includes Rose and Andre

A Base Drawing of Andre's Signature Pose! This is the pose I'll use to draw him in all of his outfits!

Andre as an Olympic Snowboarder!
Add a photo to this gallery
Retrieved from "https://everafterhighfandom.fandom.com/wiki/Andre_Fairchild?oldid=342715"
Community content is available under CC-BY-SA unless otherwise noted.