Start a Wiki
This Page, Annabella Venezia is a work in progress, meaning not all sections are filled out

I wish everything could just go back to *normal*. Is that too much to ask? There is just been to much going on, all I wish is things could just stop changing for maybe a *second*.

I can open and close caves with a magical phrase.

My Prince Charming will find me buried alive.

Cooking Class-ic. I love to cook!

Apple White is one of my closet friends!

Annabella Venezia (she/her), full title Princess Annabella Adriana Venezia, is a 2014 introduced character. She is the oldest daughter of Gabriela Venezia, the previous Bella Venezia's daughter, and her husband, King Aimone Charming, from Bella Venezia. She is currently in her second year of Ever After High.

Having being told from birth that she would follow in her mother's and grandmother's footsteps, Annabella has found security in her destiny as one of the only consistent things in her life. From the death of her grandma, to the separation of her parents, all she knows is that one day she'll live out the Snow White story everyone else before her did, thus siding as a Royal. However, as she's seen what the mere concept has done to her mother and the rest of her family, she's started to grow a little concerned...

For starters, Annabella is incredibly noisy. This girl is addicted to news and will do anything to get out every little detail from people. It's gotten her into some sticky situations in which her reporter instincts have gotten the best of her and barged into some conversations she wasn't and shouldn't be involved with. Most of her friends are used to her noisy attitude, but strangers? It's good to give them fair warning before involving themselves near her. Annabella has more or less gotten this under some resemblance of control recently do to the certain incidence in which she has shut up entirely, but alas, the girl will not stop.

Annabella is, unsurprisingly, very naturally curious. Which I suppose is very similar to noisy but she's curious about many, many things, maybe not just the sweet details of some gossip going around the 3rd Year lockers. She's the type of person to fall down Wikipedia holes and for a period of time, she gets obsessed with a certain topic, watching all those 5-minute facts videos on Wootube. She would happily dump the random information she knows on a variety of topics, ranging from one specific breed of dog to the economy of Japan.

In a similar vein to her nosiness and curiosity, Annabella is pretty impatient. Maybe it's her inner "spoiled Princess", but Annabella wants things now and quick. If she has to wait for somebody to figure something out, she's done with them- she'll find it out her self. It's hard for her to sit still, always waiting for the next story, the next class, the next break, the next whatever, the world can simply not move fast enough for dear ol' Annabella Venezia.

Despite all the things that have gone down during the course of Annabella's life, she has still managed to be optimistic threw it all (at least for the most part). Do things get the best of her sometimes? Of course, she's human after all, but that doesn't mean she doesn't at least try for them not to, or at the very least not let people know that they do. She's a bright ray of sunshine, she has to be the optimistic one, right? Annabella tries her best to keep the people around her as happy as can be always having an incredibly positive view on life. She's definitely a glass-half-full kind of Princess.

When Annabella was younger, she was very confident in herself. However, as time went on, her confidence slowly slunk. Part of it was due to her mother as she slowly grew into the cruel persona she wears now. Like how her story plays out, Bella Venezia is very jealous of her daughter which seems to be happening with Annabella and Gabriela. Even when Annabella was still relatively young (middle school age), she often heard her mom spewing jealous and cold words about her appearance, and she latched on to them like crazy. She was belittled and couldn't do anything without her criticizing it, leaving Annabella incredibly self-conscious and with very insecure. She's trying her best and knows this is all just for destiny, so her mother doesn't really mean it.

After the birth of her sisters, Annabella had to grow up pretty fast and act as a mother to them. Thanks to this, Annabella has developed a very motherly nature. She's very much the mom friend and the one everyone comes for advice. She's very gentle and considerate, always down to listen to other peoples problems. To cement the mom's friend persona, she always medicine, first aid kit, and snacks in her locker or purse in case anyone needs it. You can never be too prepared.

Annabella is a short, Italian girl with light skin, hazel eyes, and chest-length brown hair. She's very self-conscious about her appearance and tries to imitate others' hairstyles and makeup.

As one could assume, Annabella has a thing for journalism. She works for the school newspaper, mainly writing about simple events around the school (she leaves all the gossip for Blondie). Annabella isn't a particularity big name in EAH newspaper world (contrary to how she would like to preserve herself), however, she hopes that maybe this will at least give her a head start for when she's older.

How does Annabella come into it?

Annabella's parents were, more or less, high school sweethearts. Minus the sweetheart part. They started dating during Legacy Year cause "You're my prince so I guess we have to" and they had a pretty solid relationship. More specifically, a solid friendship. Anyway, after their story, the two were married in a typical Royal Wedding and some time afterward, Annabella was born, thrusting her into this whole mess.

Annabella has watched first handily how the mere concept of destiny can ruin people's relationships with others and their own lives.

Yet still, she clings to like a child clings to their teddy bear.

One of the most consistent things in Annabella's life is her destiny. Her mother has put this idea of being the next Bella Venezia's daughter ever since she was little. So much has happened in her life- the death of all of the Grandparents she's met, the separation of her parents, that its almost like she doesn't know what's gonna happen next expect hopefully she will be able to complete her story.

is there more? good question 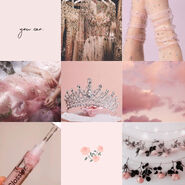 moodboard by me
Add a photo to this gallery
Retrieved from "https://everafterhighfandom.fandom.com/wiki/Annabella_Venezia?oldid=340396"
Community content is available under CC-BY-SA unless otherwise noted.