The Fairy of Truth

What do I want? It's... embarassing ok? I just... kinda wish I could be seen as cool, like the Prince and Knight students, you know? Like not that I'm ungrateful or whatever, my role's still really cool but... people don't think so.

Nothing too major, I've got some morality based transformation magic, shapeshifting, nature affinity... you know the stuff.

The way people treat fairy godmothers is really kind of unfair, isn't it...?

Being a TA for anger magicment can be a bit of a drag. Don't get me wrong, it's good story prep. Unfortunately that story involves me getting yelled at by a beastly prince.

A certain 'darling princess.' I guess you could say. Ha.

Anthony Verity Faeritas is the son of the Fairy of Truth from Prince Darling. Taking great pride in his role, he's functionally a Royal.

Anthony is a mild mannered, generally calm person. He's relatively inoffensive, and most people would describe him as a likeable guy, though they'd probably leave it at that.

He takes extreme pride in his role as the next Fairy of Truth, and strives to be helpful to others in any way he can. Anthony is a pretty friendly person, who's pretty good at striking up casual friendships with others, although maybe less good at developing close friendships. Though he's not the most popular, people do generally know who he is on some level. He's a very altruistic person, always willing to help others out to the best of his ability even if he's only just met them.

Anthony is an extremely moral individual. He always sticks to the moral path, and actively avoids any wrongdoing. However when it comes to advising others to do the same, his attempts are halfhearted at best. He is quite averse to conflict and has a tendency to opt for the path of least resistance in interactions.

In truth, his moral behaviour isn't something that comes extremely naturally for him. Anthony is terrified of doing anything wrong, to the point that he always wears a ring that pricks him when he does anything bad, so that he can immediately stop. He always second guesses himself to the point that if the ring doesn't prick him he'll assume it's not working. He has zero confidence in his own judgement and often conforms to what he thinks he's supposed to do.

Anthony can be quite passive when it comes to dealing with others, especially when they're constantly asking him for favours without thanks or taking advantage of his better nature. He dislikes it, but he tends to comply anyway. However he immediately closes himself off emotionally to those kinds of people. Because of this, Anthony often feels extremely powerless. He feels like he's only seen as a helpful side character, and envies other students with more heroic roles. He often fantasizes about being part of their group, or being a heroic legacy. However he's afraid of the embarassment that the possibility of failing at that would bring. He's extremely concious of the social hierarchy and never tries to deviate from the position he thinks is his.

At the end of the day, Anthony has his good qualities. He has quite a dry sense of humour, and when he open up to people, he's much more friendly and confident. Living up to his role's title, he's pretty honest, and is good at giving frank advice when asked. He's also undyingly loyal and cares a lot about the people close to him.

Despite his legacy, he's often treated similar to a fairy godmother legacy, and often gets enlisted by other students to grant their wishes. However since his magic abilities cannot directly grant wishes, he often relies on sheer resourcefulness and knowing people who know people who can help him get the outcome he wants.

Anthony is a short guy with a slight build. As a fairy, he has pointed ears, vampiric teeth and a large pair of blue-black dragonflyesque wings.

His hair is a green colour, which darkens to blue via exposure to the elements. This is surprisingly a natural effect, due to his fae biology. His skin is olive, with a notable greenish tinge- again, because he is a fae. His eyes are green.

How does Anthony come into it?

After the events of the story, King Darling and the Fairy of Truth remained lifelong friends, with the Fairy becoming a very prominent and respected member of his kingdom. While originally simply serving as the guardian of the kingdom's forests, his mother took extremely well to state life, acting as the kings adviser, a statesman and eventually deciding to become a lawyer dedicated to defending the innocent. Suffice it to say, Anthony felt a lot of pressure growing up, despite his mother's best efforts.

Wanting to make his mother proud, Anthony identifies as a royal. Anthony is also on some level scared of deviating from his destined role. With the Blue Fairy's disappearance, the possibility of the same happening to him gnaws at him. Because of this he's very very loyal to following every single detail of his role, more exactly than he might do without that threat of disappearance.

The Fairy of Truth (mother)

As his only immediate family member, Anthony is extremely close to his mother. He's desperate to live up to her legacy, and make her proud. However he doesn't seem to realise that all she wants for him is for him to be happy and his own person, and that he doesn't need to be like her.

Anthony doesn't remember much about his father before the curse, but he still cares very much about him. They might not be able to connect on a verbal level, but Anthony still spends as much time as he can with him. Neither he or his mother are certain of how much of his cognition remains and how much is baser instinct. They don't really know anything about the curse really, and they're still trying to find a cure.

Anthony doesn't like to consider the possibility that the curse is unbreakable.

After a frankly bizarre first meeting where Anthony ended up being begged to find out Fiona's crush's type, the two somehow bonded. Fiona was an awkward princess who didn't really know which social circle she fit in to, and Anthony knew people but didn't have any actual close friends.

Anthony has a lot of acquaintances, and always seems to know someone who can help with specific things. In fact, it's startling how well connected he is, since he seems like such a low key individual.

Having grown up beside a forest, Anthony has a lot of animal companions, including three dogs, six doves and four budgies. They were left at home when he came to Ever After High.

However his mother, worrying aàbout how he was doing at EAH, sent him stuff so that he could adopt a dog locally. This ended up being an elderly Frenchie who he named Courage.

However a friend's pregnant St. Bernard gave birth to puppies, and look, he couldn't resist adopting one, ok? They offered, it'd be rude to refuse. He named her Sophia.

For his birthday, his friend Fionnuala bought him another dog, a keeshond who he named Temperance.

While walking his dogs, he found a stray mongrel, and uh... you know... kept him in his dorm room. Justice is a good dog ok, shhhh! 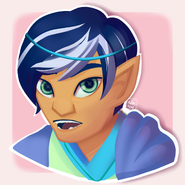 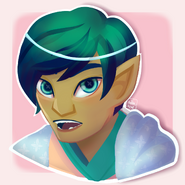 Add a photo to this gallery
Retrieved from "https://everafterhighfandom.fandom.com/wiki/Anthony_Faeritas?oldid=303262"
Community content is available under CC-BY-SA unless otherwise noted.