I want to live out my destiny (hopefully without dying) and make people respect me!

I am very good at convincing people to do what I want. It's a gift.

People tend to underestimate my intelligence. It's so annoying. But it helps me so I can’t really complain.

Antinea Tallulah Imperia De Winter, stylized as Antinea De Winter on official documents, is a 2020-introduced and all-around character. She is the daughter of Milady De Winter, from The Three Musketeers, and is destined to take her mother's tale. In the destiny conflict, she sides as a Royal because she is extremely proud of her destiny and her mother.

Antinea can be summed up in one word - Regal. She carries herself very well and walks like she rules the world. She is also very prim and proper, and never uses slang. She is always conscious of how she looks to other people, because she places pride in her image.

She comes across as haughty or arrogant but can quickly turn on the charm if she wants to. She is a very calculating person and acts a slightly different way with everyone. She’s extremely quick to figure you out and will be quite nice to you if she considers you useful. As a result, Antinea is double-faced and you can never be truly sure who she is at the bottom. Ask different people and they’ll tell you different things.

Antinea fancies herself a puppet-master, and believes she has everyone dangling on a string just waiting to be used for her own purposes. It’s quite close to the truth actually. She is just as cunning and ruthless as her mother, but few people notice this.

Antinea is a huge flirt, as she believes it’ll help her get what she wants. She has had a string of boyfriends and has dumped each one in the nicest way possible (she doesn’t want her chances damaged after all). If you ask her why she’s had so many, she’ll just sigh and say they felt off.

Antinea is very intelligent but intentionally maintains a B average. This is because she thinks she’ll stand out more if she gets hexcellent grades all the time and she wants to be considered ‘one of the student body’.

Antinea practices often because she feels she needs the skill, and will often ask people to spar with her. She invested in a sword and named it Perseverance, and often engages in swordplay with anyone who's willing.

Antinea likes to be seen, and what better way to do so that mingling with the students? She enjoys going to parties and having conversations with the student body, and loves how good it is for her image. Antinea fancies herself a socialite, and honestly it's true. For this reason, she frequents almost EVERYWHERE she can see and be seen.

Antinea likes clothes, and she buys a lot of them. She thinks that her sense of style is one of the few ways she can genuinely express herself. She enjoys visiting shops in Book End and visits Ashlynn's store on a regular basis.

Antinea has wavy platinum blond hair that reaches her mid-back. She usually wears it down, and sometimes she straightens it. She has gentle greenish-grey eyes and rather pale, smooth, skin. She is 5’5, and appears to be smaller than she actually is. For face claims, I'll say mostly Dove Cameron with the blankness of Poppy.

How does Antinea come into it?

Just before her tale, Milady had a child with Cardinal Richelieu. Milady took care of her for the most part but slightly before her death handed her over to the Cardinal. Milady was with her child long enough to impress her views upon her child and Antinea will take her role at any cost. The only difference is that Antinea believes she’ll be smart enough to escape death.

Antinea was close to her mother before her death. Antinea was 11 at the time and has pretty much gotten over her mother’s death. She misses her very much though, and has vowed to carry out her destiny for her mother’s sake. Milady taught Antinea to keep her chin up, never stop smiling, act like she’s royal, and people will treat her that way.

Antinea also loves her Dad, and he encourages her to follow her destiny. She is definitely his favorite. TBA

Ace and Antinea are surprisingly close. She thinks he should just 'settle down and accept his destiny' but even if he doesn't, she'll love him just as much. They usually have lively banter and he is one of the few people who know the real her. But he doesn’t expose her because he loves her too much, for which she is grateful. He is the only person in the WORLD that can call her ‘Ant’ and not get their head bitten off, and She calls him Acelin to annoy him, but he minds it less when she does it. She’s always trying to convince him to follow his destiny, care about his image, and for goodness sake fix his hair, but he ignores her. But she loves him to bits anyway.

The only reason Antinea is friends with Tommi is because she is a literal treasure trove of information. She respects Tommi’s skill at finding important pieces of information, even if she doesn’t like her per se. Tommi is very useful to Antinea, and Antinea is not exactly aware that she is useful to Tommi as well.

Eira Shivers Eira's relationship with Ant is complicated. They're both huge manipulators, and they often try to best each other at their game. As of right now, it's a tie.

Antinea's typical outfit is a light green dress with silver details. She has a silver ring that has a very tiny (but sharp) knife inside, which is revealed when you unscrew the rose design. 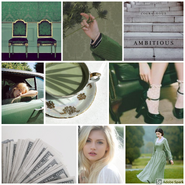 A mood board for Ant!

Antinea and her dog
Add a photo to this gallery
Retrieved from "https://everafterhighfandom.fandom.com/wiki/Antinea_De_Winter?oldid=339717"
Community content is available under CC-BY-SA unless otherwise noted.