"I have adapted my mothers curse , i am now able to congure jewels and gold "

"I'm always busy helping people , but it would be nice for somebody to look after me " But that won't stop me for having a crush on Bane

"Surprise jewels falling from my mouth"

Aqua Doux is the 2015 newly introduced female character for the wiki. She is the daughter of the younger girl from the story Diamonds and Toads.She is also friends with Tanulth The White

Diamonds Over Toads is about A bad-tempered old widow had two daughters; her older daughter was disagreeable and proud but looked and behaved like her mother, and therefore was her favorite child; her younger daughter , was sweet, compassionate, and beautiful, but resembled her late father. Jealous and bitter, the widow and her favorite daughter abused and mistreated the younger girl.One day while drawing water from the well, an old woman asked the younger girl for a drink of water. The girl politely consented and after giving it, she found that the woman was a fairy, who had taken the guise of a crone to test the character of mortals. As the girl was so kind and compassionate toward her, the fairy blessed her with having either a jewel, a diamond or a pretty flower fall from her mouth whenever she spoke.

Aqua is a medium height girl with crystal blue eyes . Aqua has long wavy brown hair with blue streaks with a tiny plait at the front of her hair . Aqua's normal wear is an short mini pale blue dress with stiched raindrops with jewels stitcthed around the top of the dress . She also wears Shoes which are covered in jewels .

Aqua Doux would be played by Victoria justice or Nina Doberv of any live action or voice overs.

Aqua was raised to be well mannered and nice to anyone . when she was young she friended Ginger Tracbea and made her jeweled necklaces and haedbands from her jewels and was excited to find out that Ginger would be joining her at Ever After High .

Although some secrets she is able to hide . Underneath her Nice sweet nature she is secretly like a rebel , because she believe princesses she fight as well for their fairy tails , During summer time Aqua secrelty trains in the woods amending her swordsmanship and fighting skills for her future . But during one of her training sessions she was found by Bane O'Rouge and after that encouter started to be more dependant and developing a crush on him later.

Later on her personalty started to develop more than she thought it would , she suddenly started to strive away from being a royal because her role inside her fairy tail did not sound to positive and forth-coming in her eyes and decided to aid others more to the point of becoming a little hero in the eyes of other students

Although she is a dragon . Aqua loves being her friend and her only best friend meaning there would not be any arguements . Tanulths helps Aqua braid her hair ready for bed and Aqua makes necklaces and hairbands made from her jewels.

Fay and Aqua meet under the circumstances of the book jewel hunting , she is first introduced as the 'Jewel Maker' making jewels for specific students depending on either their mood and specifications . Fay and Aqua became friends straight away on their slow and adventerous joureny and remain friends still

Nothing much to say here , Bane is always in the same place at the same time as Aqua . I always see's him because their lockers are at the same location and eventually developed into a small crush but has never talked to him about her feelings so she never says anything and just passes bu everyday.

Aqua has a hobby of making horrible things look beautiful . Since aqua is able create gems she is able to decorate dresses and make neckalces and hairbands for her friends . Secretly Aqua likes to train in swordsmanship she loves to also disguse herself like she was at a masquerade . 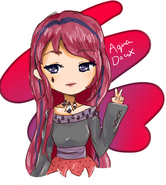 Aqua's Disguise during the dragon games ~Thank you for making it :)

Retrieved from "https://everafterhighfandom.fandom.com/wiki/Aqua_Doux?oldid=213012"
Community content is available under CC-BY-SA unless otherwise noted.