Royal A Royal to my family, a Rebel to everyone else.

Brangwen Von Dark. A little too creepy for me, but she's cool nevertheless. Also she's speaks with ghosts, so y'know.

To be free from my destiny. I mean, it's totally cool and all but, this is not for me. I'd rather be doing something else with my life, y'know?

Need some help with Tarot and all that stuff? I'm your gal! Anything astrological is my vibe, dude.

As if! Still waiting for the right Pisces or Taurus to come to my life, though.

Rene and Min are hella cool and I love them. Also Rhea is amazing and deserves the world!!

Astral Unicornia is a 2017-introduced and all-around character. She is the daughter of the Unicorn that appears in Alice’s Adventures in Wonderland, and is destined to take his role in the story. Astral would rather be a Rebel, since she wants nothing to do with her destiny, but sides with the Royals upon her mother's wishes.

Astral's first noticeable feature would be her energetic and spontaneous nature. She's an adrenaline junkie who will, most of times, impulsively take decisions without thinking much before doing so. Her friends have to be her impulse control 90% of the time, otherwise, she will do some ridiculously dangerous things just because it came to her mind. Astral is impulsive, and acts without forethought, which leads people to not let her be in charge of situations most times. And speaking of that, the unicorn's mind is full of some crazy ideas. Maybe it's part of her Wonderlandian blood, but some might even say she's madder than the Mad Hatter himself. That's why everyone has to control Astral on a daily basis.

As everyone can see right when they meet the Unicorn, Astral is your local 90's girl. She incorporates the 90's culture with a passion, and everything about her screams that decade - from her clothing style, to her way of speaking and tastes. Unintentionally, though, Astral is also a pretty typical High School girl from the 90's, mixing some stereotypes into herself. Those would include the local rebellious girl, the rather bright grunge lady and the rich brat with an awesome wardrobe. She embodies the spirit of someone who is living in the 90's, and no one can tell otherwise. It's like Astral has been stuck in the past. Her vocabulary is mostly composed by 90's slangs and 90's memes; she has those 90's references no one gets; communicates with others through a 1995 computer and pagers (which takes decades to send messages), and her roommate must be tired of those 90's television programs. Upon meeting Astral, one gets this vintage vibe of a girl who has been left behind in time, and that is probably both Astral's most delightful and most annoying feature.

Rebellious and revolutionary, Astral lives for breaking traditions and always finds a way to stand out from the rest and not follow the mass. She's all about "challenging the system and its flaws", and one of her mottos is "be yourself". She fully supports the Rebel cause and considers herself a Rebel, but has to pass the image of a perfect Royal girl to her mother. However, Mrs. Unicornia doesn't know that her daughter is always involved in protests in favour of the Rebels, and little does she know the revolutionary groups Astral's a part of. Astral is a socially involved person, and refuses to pretend that she's not living in a time that needs change.

Despite her very ditzy and foolish personality that can trick some people, Astral is rather smart and intelligent, but likes to let people understimate her and be surprised at the end. The only thing Astral is not is silly, and she loves to see those faces when she shows to be a very clever individual. She's skilled in various areas, has quick answers to whatever herself or people need, and has a bright brain that works really fast and can come up with solutions at any moment... Which might be partly the reason why she's so impulsive.

Additionally, it should be mentioned that Astral is very, very competitive. She loves bets and anything related to it, and doesn't give up until she is the winner. She can be seen here and there in little fights with her friends just because she knows she is the best and, you know, there are things to be won.

On a side note, Astral is a Zodiac crazy. She's totally the type that will judge someone based on their Zodiac sign, and is highly skilled on everything astrological-related. She can come up with any astrology birth chart at her will, and even works with Horoscopes, Tarot, Psychic Readings and such. This can be really irritating and useful at the same time, and it would be recommended that Aries people didn't approach her... For precaution.

Astral is a petite, scrawny girl with copper skin and light freckles all over her face, arms and legs, and has beautiful, doe brilliant pink eyes. Her hair is toned in various shades of purple and pinkish purple, and is short, messy and shiny, and she has a periwinkle unicorn horn on her head, as well as periwinkle horse ears. She has star markings on her forehead, cheeks and back. As for her outfits, Astral follows the 90's grunge fashion - but without the dark colours. She tends to incorporate shades of purple, pink and blue in grunge-styled outfits, and her motifs include stars, planets, universe-related things, and unicorn silhouettes.

Astral is highly interested in astrology, as mentioned before. She is an expert regarding Zodiac signs, Horoscopes, Tarot, Psychic Readings and such. A lot of students come to her for that, and she has her mirror blog totally dedicated to Horoscopes and this stuff. Astral is happy to help other people with their astrological lives, and often earns money with it. She has her own place at the Bookend Village, where she attends those who need astrological help.

Astral absolutely loves Geeky things. She has a special love for sci-fi and space opera (one of her favourite things in the whole world is Story Wars), superheroes and crazy movies about time travel (also known as Book to the Future). She is a helpless fan of old action and fictional movies about galaxies far far away and crazy worlds. Astral also enjoys every 90's movies.

Mostly because Astral is really, really energetic. Headmaster Grimm thought she would be pretty helpful to the Cheerhexing team, and she is. She also likes to hang out with "the squad" and enjoys their company in training.

Despite her mother's disapproval on that taste of hers, Astral is very much into punk rock. Her playlist is composed almost entirely by grunge bands and singers and so on. She enjoys the sound and finds it to be quite like her.

How Astral Fits Into It

Astral is the only daughter of the Unicorn who fights with the Lion for the White King's crown and, therefore, shall take his destiny and follow his legacy. Astral's not particularly fond of her fate and is a Rebel at heart, but since her mother practically forces her to be a Royal, Astral pretends she will follow her dad's fate, when she really will not.

There are not many story parallels in Astral's character, just like both the lion and the unicorn aren't well-developed in the story, but here are some:

Knight and Ethereal are Astral's parents. Knight was the one who serves as the Unicorn in his generation, and Ethereal is an Unicorn who comes from the White Queen's court. Knight is a rather chill guy, but Ethereal... Ethereal is truly one of Astral's worst nightmates. Little is known about her relationship with her mother, since Astral doesn't talk much about it, but everytime Mrs. Unicornia is mentioned, Astral has to hold back her tears. Her father never got in the way, thus why she holds something against him. It was the best thing that happened to Astral when she got the change to attend Ever After High, as it would mean finally getting out of her house.

Originally, Astral and Rene paired up simply because they looked nice next to each other, and everyone knows Astral is all about the aesthetic. Obviously, they eventually grew to be quite close friends. Renegade serves as Astral's impulse control 70% of the time, but when they're together, they're mostly trouble. Astral encourages Rene to use her fire magic almost all the time, and being aware that the craziest ideas come to her mind every second, people better watch out when they're together. Renegade is also one of the few friends of Astral who has a special pager for when Astral needs her to be quick.

Rhea is Astral's best online friend. It's unknown how they met, but Astral was beyond happy to find an Unicorn buddy who would understand her unicorn problems. They communicate mostly through emails and letters, but it takes forever to Astral's old software to receive Rhea's emails, which results in her being super slow to reply - making Rhea worried, because she has no idea if something happened to Astral. Therefore, the idea of giving a pager to her closest friends came from Rhea, who was the first one to have a pager from Astral - so when there are emergencies, important or not important ones, their first form of contact is the pager. Astral idolizes Rhea and puts her as a role model in her life, and just can't wait to finally see her in person. She considers Rhea to be way closer to her than her own parents... And distance cannot decrease Astral's love and admiration for the other Unicorn.

Astral primarily approached Starlight because she was the most aesthetic being Astral has ever seen. Unsurprisingly, their tastes were quite similar, since Starlight herself is a star and Astral is crazy for anything space-related. They became rather close friends, and can be spotted stargazing together, or hanging around judging people by their Zodiac signs. Stars constantly maps constellations for Astral and helps her with anything she needs.

Astral has a pet cat made of stars and constellations, whose name is Mia. Mia was given to her by Starlight, thus why she is magical and able of existing. Astral pampers and spoils Mia a lot, to be honest, and does everything for her beloved kitten.

Upon animal calling, a little lion cub came to Astral, and she named him Vincent. He gets along quite well with Mia and Astral never stops fangirling over how cute little Vincent is.

Astral is openly pansexual, with a preference for older, intelligent girls. She has been with some people in Ever After High, and claims, everyday, that she has found the love of her life.

(She's also looking for some people to have a romance with) 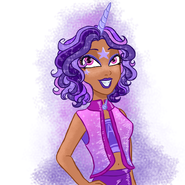 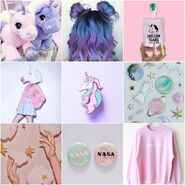 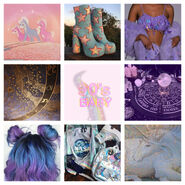 Astral 2.0
Add a photo to this gallery
Retrieved from "https://everafterhighfandom.fandom.com/wiki/Astral_Unicornia?oldid=312219"
Community content is available under CC-BY-SA unless otherwise noted.