To be honest, I'm royally unsure. I do look 16 for now though.

The Ghost of Christmas Past

So many wonderlandiful things happened in the past! Wouldn't it just be enchanting to go back to better days?

I can look into the past, dream or no dream. Need to retrace your steps or remember hexactly what Professor Nimble said in Storytelling? I'm your ghost!

I wonder who'll be haunting me? I never really know. It could be anyone.

I'm always out of the now! There are so many places I'd rather be that I tend to hex out and find myself in the Catskills with Rip Van Winkle or England with Wendy!

History of Tall Tales! You can say I have a good mind when it comes to the past.

Science and Sorcery. It needs a lot of hocus focus and I've never had a lot of that.

Audaline Syne, [they/them] is a 2017-introduced all-around character and the next Ghost of Christmas Past from Charles Dickens' A Christmas Carol.

They identify as a Roybel because they love their destiny and the abilities that come with it but also sympathize with the Rebel movement and understands that there are many possible futures for us all.

While naturally curious and adventurous, Audaline is shown to have little interest in things of the present, and as a result their mind travels to other times of the past in satisfaction of their curiosity and adventurousness. This mentally removes them from the present, as they space almost entirely. They are frequently detached from reality and from others. However, when they aren't, Audy is the student that yells a lot and annoys everyone but still manages to be endearing. They joke often, but mostly consisting of puns or references to history.

Audaline is unshakably determined. Once they set their mind to something, it is near impossible to get them off it. It's the only known cure for their present-time attention span. And while they pride themself on being open-minded, They are quick to judge and hold opinions over others.

This is not without reason. Due to their ability to look into the past, Audy easily understands other people, and their given backstories. However, they have little value of privacy. (They are, thankfully, unlikely to share the information to the public.) Anyway, they look into other people's pasts only rarely, and sticks to watching something a bit older, and also watching every Christmas celebration so far.

Audaline cares deeply about memories and things that happen in the past and is a frequent source of nostalgia for the students of Ever After High. That kid who suddenly asked for the names of all the aliens from Ben 10 Alien Force in the middle of class, or generally just brings up old memories that really strike you nostalgia chords? That's Audaline.

Audy also shows a small interest span, since they get bored simply by having a history mindblock. Also, they are a straight up nerd. Toss a trivia game their way and they will eat it up.

Because they're technically a formless "ghost," Audaline can just float around and even phase through walls. This negates their need for walking, and the only reason they wear shoes at all is due to fashion alone. Audaline can stand, but walking is another story entirely. (Hint: they can't.)

Like all earlier Ghosts of Christmas Past, Audaline can pseudo-time travel to watch previous events, whether they be a century ago, or only a year back. They can bring someone with them if they so wish. It is unknown what is the limit of their vision, but it is assumed that their forays into the past must always be linked to a person. Therefore, if they choose to see in the time of a British king, they cannot follow the same person into Dorothy's Kansas.

Audy is also gifted with a brilliant memory, but also cursed with a garbage focus. It makes them seem almost ditzy.

They do this often, to the point where they can just subconsciously do it when their attention towards something drops. Their favorite eras are Fairis 1950s, the Roman Empire and Victorian England.

As a spirit of Christmas Past, this is unsurprising. Some would say that Audaline's love of history borders nerdiness.

Every time they time-travel for a longer time that usual (like always), Audaline picks up the language of the era. They have a weird accent because of this.

Aside from history and watching previous fairy tales, Audaline has also been using their time to backtrack all the way to the first Christmas ever. (What they will find is unknown to them. They don't want to get spoiled.) They're currently on Christmas #753.

Audy has an entire portion of their mind reserved for puns and jokes. They're all mostly related to either time, history or Christmas. Cursed it is, if it is all three.

"Christmaspast & Co." is the name of their father's vintage store in Bookend. Like Maddie does in her teashop, Audy also helps their father run it on occasion. When Christmas approaches, it also doubles as a decoration store.

Ever after since Pandora introduced Audaline to the app, Audaline has begun using it often. They still don't understand the appropriateness necessary for taking selfies, but it makes Pandora laugh more than it irritates her.

Like their parent, Audaline is not of any particular gender, but presents as a feminine teenager. Audaline has dark skin, elfish ears, silver lilac hair, and grayish lavender eyes. They also have silver freckles under their eyes, but they add a bit of sparkle sometimes. They are actually really tall, but their usual go-to style of flowy and large makes them seem smaller than they really are.

They are fond of antique and vintage-esque styles, or whatever passes for vintage in this world. Mostly, it falls under Greek/Roman or anything older. It is also reminiscent of the Neon Age.

How Does Audy Come Into It?

Unlike their cousins, Audy had never been born. Audy just one day existed, or at the very least that's how they remember it.

Of course, They have memories of a woman, presumably their mother, and it's one of the few memories she can't access even with their powers. But no matter what, Audy swears it's a real memory.

Father: Audaline's "parent" is the Ghost of Christmas Past. Several adaptations vary, but though the original story states that the Ghost was of indeterminate age or gender, Audaline has come to know their predecessor as their father. Due to their shared value of the past, Audaline's father was capable of giving Audaline a good childhood for them to look back on.

Ever since Audy's admission into Ever After High, the Ghost of Christmas Past has also owned a vintage store in the Village of Bookend named Christmaspast & Co., where they sell antique items they both call "memories."

He endearingly calls them "Audley," a name they don't let anyone just use.

Mother: In the case of Audy's mother, Audaline knows next to nothing about her. Other than the fact that she was around when Audaline was a baby, and that she was magical in some way. A naturally curious ghost, Audy always asks their father about it, and the question is always bounced back. Audaline's mother is a descendant of the first of the Three Fates, Clotho, who spins the threads of life. Therefore, Audy is born of two powerful bloodlines with strong connections to the past.

This can also be taken as a reason for why Audaline prefers strong Greco-Roman styles in their outfits.

Extended Family: They are also related to the next Ghosts of Christmas Present and Christmas Yet To Come. Audy and their cousin, Pandora Present, are wildly different but they're roommates and they're family, so they somehow make those two relationships work. Even more different is Audaline's cousin JJ Moria. Altogether, the three make the Haunted Holidays. They are comprised of a complete retro nerd, a trendsetter and a sci-fi hipster.

Audaline is understands people easily, especially with their given ability to see so much backstory. While they aren't very social and is mostly seen staring off into the distance existing in another time, there are times which they are focused enough to make friends.

As the Snow Queen and the Ghost of Christmas Past, these two get along like a tongue on a frozen pole. However, since Crystal is in the Winter Palace, and Audaline in Ever After High, their meetings are limited to the few times Crystal visits the school.

In the cases in which Cupid gets homesick for Monster High and is in need of reminisce, Audaline is always willing to help. In return, Audaline takes regular tours through Cupid's wardrobe.

Audy and their cousin and wildly different. Pandora is always in the now, a trendsetter, whereas Audaline is into old "vintage" or "retro" things of the past. Surprising to most people, Pandora and Audaline co-exist easily well. Not only well. They're the best of friends.

If you thought Pandora and Audy were polar opposites, get in with this. They are Audaline's adoptive cousin destined to be the next future ghost. They couldn't be more different. But when it comes to the logistics of time travel, and the art of trying to confuse Pandora, it's no hard route for this family friendship.

It seems only logical that a ghost of Christmas would befriend the next Santa Claus; Destiny and Audaline get along near fable-ously. And when Christmas comes, the three, along with Pandora, use their powers and team up to make every students' Christmas their best Christmas so far. Until Destiny can do it for herself, Audaline helps define the naughty-and-nice list, and on occasion try to find what a perfect Christmas is for the nice ones.

Audaline has a ghost cat named Prior. He never stays in one place and can be seen haunting the common rooms often.

While Audaline isn't looking for love as of now, they can find it from anyone. They identify as pansexual and do not segregate when it comes to feelings.

As of now, Audaline isn't close enough with anyone to consider them either friend or foe. However, it is known that some people avoid Audaline like the plague in fear of their past-seeing abilities.

Audaline dresses in vintage-ly ancient styles like from Old Roman or Greek as an homage to the past. their colors vary from golds, purples and greens. Their style is supposed to be ancient Greco-Roman, but it's looking a lot like some 80s retro.

Audaline in their new Signature Royals 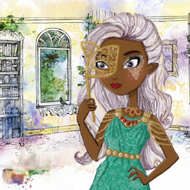 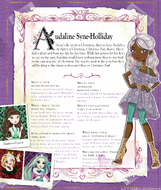 Audaline in the Webisode Style

lineart by na, colored in by moi

by tay~
Add a photo to this gallery
Retrieved from "https://everafterhighfandom.fandom.com/wiki/Audaline_Syne?oldid=334411"
Community content is available under CC-BY-SA unless otherwise noted.