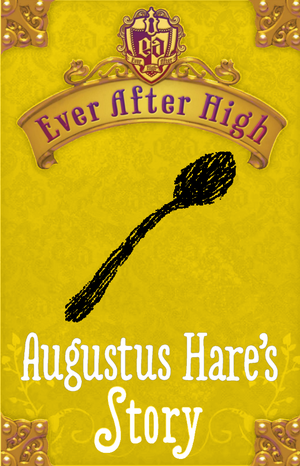 WARNING: AUGUSTUS' DELIRIOUS MOMENTS MAY SEEM A LITTLE TOO DARK FOR YOUNGER AUDIENCES. SOME PARTS MAY ALSO BE CONSIDERED A BIT DARK BY SOME PEOPLE. YOU HAVE BEEN WARNED.

And the Madness begins

Augustus Hare sat lazily on a Looking Glass Land Mushroom as he waited for his sister, June Hare, to hop to it since it was the dawn of the school year of Legacy. "June Hexa Hare! We need to travel right this minute if you don't want to be late for the first day of school!" Augustus yelled to his sister's window. As Augustus sat there expecting a reply from his older sister, a cackle and a bump was all that he heard before Augustus got hit with something thrown from his sister's window that knocked him to the ground. As Augustus regained his composure, he picked up the unknown flying projectile to his horror. "Sp-Sp-Sp-Sp-SPOOOOOOOOOOOOOOOOOOOOOOOON!" he yelled opening a rabbit hole in the ground and throwing the accursed object into it. A small yelp of pain could be heard in the distance but that didn't get Augustus' attention. It was the fact of the insensitivity of his phobia by not just his sister but his entire family. As the March Hare's son marched right into his house, he seemed to have a sudden Delirium Attackin the middle of the kitchen. "Not in the kitchen...." was the last sane thing he said before everything went MAD. Every time he blinked, the colors of his kitchen started swirling round and around and the plates had started growing stick arms and legs. A picture of a basket full of kittens had merged with the box of Heart Top Tarts right beside it into a flurry of Kitten Top Tarts flying around the kitchen, each one leaving a rainbow trail behind. As the flurry of Rainbow Kitten Top Tarts started singing some kind of repetitive sound like "Gus" in a pitch that Apple White could not match. Of course like in most times of his delirium, Augustus started screaming and throwing whatever he could grab at those kittens. "Stop! Stop! Sttop! Leave me alone!" he kept on yelling running around the house trying to escape the wrath of the "evil rainbow kitten top tarts". Augustus' sane part of his mind had kept on trying to tell him that none of what he was seeing was real but the delirious part of his mind overpowered the young Hare's mind. Augustus ran around his house the bright colors swirling around in a spiral smashing anything fragile enough unfortunate to come to his path. Augustus found his one refuge in the house, the cupboard under the stairs. It was nothing much, just a simple pitch black room with nothing but a simple arm chair. "Go away! This is not real!" he yelled covering his ears rocking back and forth in the room, whispers of madness and ridiculousness filling his ears. As Augustus was so fed up with all this madness, a tears started flowing down his cheeks. "Augustus! Augustus!" yelled a friendly voice behind the wall. It was the voice of his childhood friend, Madeline Hatter. All of a sudden, the whispers stopped. "Maddie?" replied Augustus coming out of his sanctuary. "August.... what happened?" asked the Hatter, avoiding the path of destruction that Augustus created. "Delirium Attack." said Augustus as he started picking up the pieces of broken cups and plates, his voice cracking a bit. "Oh..." said Madeline ,giving a look that not many people have seen, a look that didn't show madness, only concern and sympathy. the sudden ringing of both their watches, made both the Wonderlandians smile and laugh. "Tea Time." said Augustus smiling as if his Delirium Attack didn't happen at all. Maddie then pulled out her tea set and table with Earl Grey asleep inside one of the tea cups. "So August,It's the year of Legacy... I heard that your father is demanding that June would fulfill that Legacy...." said Maddie as she poured a cup of tea for herself and Augustus. "Yeah.... but I said that I'm happy to do it myself." replied Augustus sipping his tea. "Your wish is my command , dear brother! I hate having that job anyway!" said June as she walked down the stairs. "I'm going to save the trees! and here's a little parting gift for you brother. From me,April, and May." added June as she disappeared into a hole in the ground after throwing a parcel at Augustus. "Hey Augustus! How ya feeling Bro-Hare?" asked Derk Dormouse, Augustus's best friend, as he walked into the Hare household. "Hey Derk. How did you know I was.. you know.." asked Augustus. "Who do you think called Maddie over?" replied back the Dormouse. "Oh... Thanks." said Augustus. "Plus.. This is a good time for you guys to bond.. you know... as more... than...just friends." added Derk as he wiggled his eyebrows then ran away. Augustus started turning pink when Maddie interrupted his train of thought, "What does he mean more than "just friends"? like SUPER BEST FRIENDS?" asked Maddie before being interrupted by her watch. "Oh... I have to go now.... I have to meet Raven in the Village of Bookend.Bye August!" added Maddie as she packed up the teas set into her hat then skipped away into a Looking Glass portal. Augustus couldn't help but smile because of the Wonderland madness his friends brought over. "Wait! Am I late for school?" Augustus yelled. "School's still next week Augustus!" yelled Derk from his house. His family must have bought the wrong calendar. "Well. That's just dandy!" Augustus boomed as he disappeared into a rabbit hole to visit The Village of Bookend.

Retrieved from "https://everafterhighfandom.fandom.com/wiki/Augustus_Hare%27s_Story?oldid=32373"
Community content is available under CC-BY-SA unless otherwise noted.