BarbarianKnight3, also known as GraphicsGirl-luvs-UK (deviantART) or Laura, is a rather quiet participater in the Ever After High fandom, but is crazy about non the less.

No one wants to put up with me and I don't really want to cohabit with someone else.

I'd love to be a professional artist when I'm older but a more short term dream is to bring all my crafty ideas to life.

In love with a fictional character who I can only dream of.

Laura could be described as "mad as the hatter" but she's unsure if that could mean mad as in "eccentric", mad as in "angry" or mad as in "suffering a disorder of the mind". She's been called all three by others so it's hard to tell. She loves to be creative through various mediums such as drawing, writing and handicrafts. Her other intrests include reading, history and her various fandoms. She is rather introverted, bad at socialising and incredibly shy.

She is drawn to Ever After High because of the characters and the creativity of their world. Her favourite characters tend to be Rebels or Wonderlandians but if she's honest, any character with an interesting design are fair game as she's just a huge storytelling and design geek.

Laura will eventually get round to writing diaries/bookmark stories and Mirror Blogs for her OCs and maybe even some non-diary-type stories. 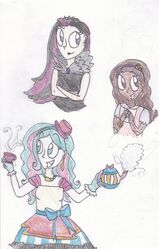 Doodles of Raven, Cedar and Maddie. 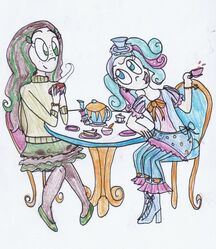 My OC Torquille and Maddie swapping stories over tea.

My own interpretation of Clara Lear (from Maddie's eBook), seeing as it's unlikely she'll get a canon design...and truth be told, I wanted to try my hands at designing a Tudor-equse character. So...Clara, yeah.

Rough sketch of Lizzie Hearts that will probably never get coloured due to mountains of work.
Add a photo to this gallery

Retrieved from "https://everafterhighfandom.fandom.com/wiki/BarbarianKnight3?oldid=310242"
Community content is available under CC-BY-SA unless otherwise noted.