Bastion Fanfarinet [he/him] is the nephew of Ambassador Fanfarinet from the Princess Mayblossom, a fairytale by Madame D'Aulnoy.

At fourteen, he was chosen to follow in his uncle’s footsteps as the next villain of the fairytale. However, during the events of The Manhunt, Bastion managed to find his cousin – his uncle’s son – to take the role instead.

Since then, Bastion has left Ever After High, claiming he had the intention of taking an internship at the House of Adalinda. However, his circumstances are currently unknown and his current conditions are a mystery. Due to this, his last will and testament has been produced by his lawyer, and all references to him shall be in past tense.

Externally, he had appeared proper, serious and boring. His decorum and etiquette was impeccable, he hardly stumbled over his words or made a fool of himself. He was rule-biding, loyal to his fairytale author, and in a phrase, lawful neutral.

Beyond that mask, Bastion had been way too uptight. He had plagued himself with overthinking, with the fear of messing up in the public eye. He was constantly afraid of saying the wrong thing or doing things the wrong way. Although he had seemed calm and unaffected by criticism, he would frequently conflate every remark made about him out of proportion and stress over innocuous comments.

That uptight nature had manifested in how prepared and how rehearsed he seemed. Conversations and speeches would be practised in the shower; cue cards were tucked in his inner blazer pocket. Each phrase from his mouth would be an attempt to look agreeable in other people’s eyes, a plea not to draw any attention to himself. This meant saying things or doing things that he disagreed with – but what was the point of being true to yourself when all you feel is fake?

And certainly, beneath his lawful surface, Bastion Fanfarinet did harbour several radical values. He had never made these clear or revealed them during his lifetime, due to his pushover nature and his constant desire not to draw notice to himself.

Bastion Fanfarinet never particularly wanted to be remembered. He had wanted everyone who knew of him to forget about him. He had wished that his name would fall into obscurity.

Without a doubt, this final wish has been fulfilled.

Bastion had looked like one of those impossibly perfect people with their life together. Although he certainly never had a life, but with a certain pretty boy charm, being well-dressed and well-put together, he was good at faking that appearance.

He had been slim, concerningly so. Although of average height, his skinniness had given him the appearance of being taller than he was.

Additionally, he had been of Eurasian heritage, with a white French mother and a Chinese-Korean father. He had been vividly part-Asian and was not white-passing - with olive skin and double-lidded medium brown eyes. His hair was naturally black, but usually dyed pink, since he had been forced to conform to the villain aesthetic.

His face had been uncannily symmetrical and he had a decent looking jawline. He hardly smiles – a shame, for if he did, one would notice he had dimples.

Perhaps Bastion was most well-known for being a member of one of EAH’s Premier Debating Teams. He had been in the team with Pythia, and was often joked to be her “right hand man”. Additionally, he had been a representative of Model UN and volunteered to help out with certain charity projects.

His multilinguality of seven languages meant that he was frequently used as a translator for English-poor students at Ever After High. He also played violin for one of EAH’s Orchestras, though he was not particularly memorable for it.

Outside of that, not many people can list any additional information about Bastion did for fun. In fact, one doubts that Bastion Fanfarinet could even comprehend the concept of fun.

What use was there for seven languages, when one knew he wouldn’t live past his twenties? Was it to merely maintain an educated, cultured appearance? Was it – dare one day – out of interest? Surely, it couldn’t have been a ’’real’’ interest in linguistics, if one never bothered to pick up Latin or Ancient Greek or any root languages?

He adores Madame D’Aulnoy. Praises her and her contributions to the fairytale world to the high heavens themselves. She had been a constant in his life, and reading her tales made him want to strive to preserve her memory in collective fairytale conscience.

Although severely disliking being a fairytale legacy himself, Bastion had always harboured an interest in fairytales. He’s read a good majority of fairytales, and knows the Aarne-Thompson classification like the back of his hand. Bastion Fanfarinet had been so genre-savvy that it was almost illegal, and could speak on fairytales as if he was part of the authorities themselves.

Princess Mayblossom is born, but a fairytale named Carabosse curses her to be miserable for 20 years. Thus, the princess was put into a tower to prevent any harm to her.

When Mayblossom was nearly 20, her parents decided that she must be married, so they sent her portrait to every legible prince. King Merlin sent his ambassador, Fanfarinet, to make an offer for his son, but Mayblossom swiftly fell in love with Fanfarinet instead, and convinced him to run away with her, taking her father's dagger and her mother's headdress.

A chancellor realised that the princess was missing, and the nurses told him about the princess and Fanfarinet. They later found from a man that he rowed the couple to an island.

At the island, you probably expect the Ambassador and the Princess to be happy. Nah. Turns out that Fanfarinet was actually a huge jerk, a lazy arse, and wasn't very nice to the princess at all. Later, while the admiral men land on the island to search for Mayblossom and Fanfarinet, Mayblossom made Fanfarinet invisible with her mother's headdress, and he ended up killing the men.

Later, Fanfarinet turned on the princess, about to kill her as well, but instead Mayblossom stabbed him in the face and threw him down a cliff.

When Mayblossom went home, her 20 years were up, and ended up married to King Merlin's son, who was hella rad.

How does Bastion come into it?

The Fanfarinets are a small family of international diplomats, whose villa is generally based in Annecy, France. Their children and relatives are often sent to serve prestigious Francophone Kings and Queens (one of which would be their generation’s King Merlin). With a grand reputation, and a work ethic seen as nothing less than impeccable, it is seen as an honour to host a Fanfarinet (particularly if your lucky family was destined to join with that of the Mayblossoms.)

Simply put, Bastion was the previous Fanfarinet’s nephew. His mother, Elise Fanfarinet, was the younger sister of Jacques Fanfarinet, who fathered no legitimate children. Despite the Fairytale Authorities creating a consistently updated list of his children, they instead pushed the destiny onto Bastion. Such a decision was due to the actions of a certain Elise Fanfarinet, who believed it was cruel to subject another’s child to the destiny, and offered up her own instead.

Unfortunately, such a sacrifice was practically useless. With the events of WTW, Raven Queen absolved everyone of destiny, and no longer did the Princess Mayblossom fairytale have to be followed. What a cruel twist of irony.

When Bastion had been the next Ambassador Fanfarinet, he learned to play the role of the villain. He was fantastic at theory, marginally decent in practise, and led himself to believe that there was little to like about himself and that he deserved the death that destiny planned for him. Although he never ethically agreed with his role, he thought it would have been better to play it well and draw less attention to himself.

After all, he had major respect for Madame D’Aulnoy. To him, she was representative of everything grand about the genre, so to serve in one of her tale’s and carry on the legacy was an evil, but required, burden of a duty.

When Raven Queen released everyone from destiny, it was both a blessing and a curse. Bastion had detested his role and everything it stood for, and for a brief moment, he was thrilled to be absolved of it. Yet, in the same magnitude as the thrill, came the crushing realisation that he had nothing to ‘’live’’ for. He grew to hate the person he had become, and was strick with fear that this was the person he had to live with for the rest of his life.

Furthermore, when he was the Ambassador Fanfarinet, he knew how life would turn out. He knew exactly what would happen, exactly what he would do, exactly what people expected. Now, without destiny, the future became uncertain to him, and due to that, he wasn’t even sure why he was still alive.

Stuck between wishing for both a future and at the same time, a funeral, Bastion had spent the past few months struggling with his own identity. Only after the events of The Manhunt did he begin to see a way out. 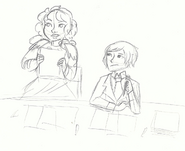 they used to be frieeeends

bastion in The Manhunt 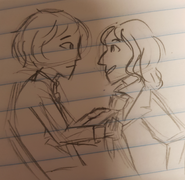 #tbt airmid and his fake ties 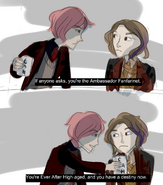 a brief summary of the Manhunt (redraw of an HH screenshot)

Retrieved from "https://everafterhighfandom.fandom.com/wiki/Bastion_Fanfarinet?oldid=340025"
Community content is available under CC-BY-SA unless otherwise noted.