I want to be the best musketeer ever! I just wanna be as great as maman!

I'm pretty good at fencing, I guess? Maman has taught me a lot about it! Plus, thanks to mommy, I can also bake snowonderful things!

I'm too young for romance, I believe... Plus my destiny requires me to be alone, so yeah!

Reiner Claus d'Herblay, Ciel Fairer and Fontaine Fairer!
Belle Claus d'Herblay is a 2017 introduced Next Generation character. She is the daughter of Scarlet Anne d'Herblay and Destiny Claus, from The Three Musketeers and the Santa Claus legend, respectively. Destined to take her mother Anne's role and be a musketeer, Belle identifies as a Royal; she is excited with all the adventures of her story and is willing to fulfill her destiny.

Belle is a perfect mix of both her mothers. Kind and friendly, she takes a lot of Destiny's bubbly personality. Always willing to make new friends, she's extrovert and a lot sympathetic. Belle loves people in general, and loves to help everyone, being a trustworthy and useful friend to everybody. She is positive and always looks forward seeing the bright side of situations.

Like her mother Anne, Belle is very organized and goal-orientated, what gets her very good grades. She's very much independent and self-sufficient, rarely requiring other people's help to do something. From a very young age, Belle knows how to take care of herself, what made her grow up to be a very confident girl (a little different from her mothers, who are always checking on themselves). Sure and certain of herself, she can be a little stubborn sometimes (though she's working with it, she promises).

A brave young lady, Belle is always trying to be courageous and face every little fear. She isn't afraid of standing for herself and faces things that make her scared as an obstacle she has to overcome. That makes her one of the most fearless people you'll ever know. She's also a very loyal friend, and tends to keep those she loves close to her heart and makes sure they're always safe and sound. Belle will, always, stand for her loved ones as well, just like she stands for herself, and will make sure she's there for them always.

Additionally, Belle is very empathetic and can get emotional quite easily. If you're crying, she'll certainly cry with you. Some would describe her as "empathy personified", it just hurts her to see someone hurt. She can't help but get emotional with her loved ones: are they happy, sad, joyful or mad, she'll probably share those emotions with them.

Plus, despite being spoiled by her loving mothers, Belle grew up to be very altruistic, selfless, humble and always forgiving. It doesn't matter who you are, or if you've ever done something wrong to her, she will forgive you and will make sure to provide you everything you need. She's also always trying to provide everyone what they need, and is a very charitable, benevolent girl.

Fencing, sword fighting and everything in between

Ever since she was a kid, Belle has been taught the art of swordsmanship by her mother Anne. Belle naturally loves fencing, and frequently practices it (as a sword is her destiny). Obviously, being the tender person she is, Belle is very careful about sword fighting, and cares for not hurting her opponents.

It's a family job, so obviously Belle enjoys woodshop a lot. She's always helping her mother Destiny with Christmas gifts and simply loves it.

Belle learned how to love baking from her mom, of course. She is very talented at this and loves to bake for her loved ones.

Belle is a beautiful, tall and slender girl with dark skin and short, curly reddish brown hair with some red highlights. She has Destiny's rosy purple eyes, but in general, looks more like Anne. Her motifs include lots of fleur de lis, swords and swirls, and her colours are generally red, brown and gold.

How does Belle come into it?

Belle is the older daughter of Scarlet Anne d'Herblay, the previous Aramis, and her wife, Destiny Claus. She was chosen to take Anne's destiny as the next musketeer, and is proud of it. She accepts her destiny and can't wait to fulfill it, following Anne's steps.

Anne and Destiny are Belle's loving, caring mothers. Ever since she was born, they spoil her, but always made sure she'd grow up as a humble, kind girl. They always made sure to provide her a good life, full of love and care. Destiny tends to be a lot protective over Belle, even when she's learn fencing with her mama Anne. Both love their little precious daughter dearly and would die for her, if necessary. Anne and Destiny always ensure they'll be there for Belle and her brother, and want to be the best mothers they can be. Honestly, Anne couldn't live without them.

Belle's protective little brother. They both love each other to pieces and do everything together. They are inseparable, just like twins. Reiner is the one to always protect Belle, even if he's younger and a little scaredy cat. They're always going on adventures together, and if one gets in trouble, the other gets too.

Lumi is Belle and Reiner's younger sister, and she's just a baby. All of them love little Lumi a lot. She's the light to Belle's life, and the next musketeer is always spoiling her baby girl and trying to be a very good older sister for her and for Reiner.

Belle's uncle and aunt-in-law. She loves both of them dearly, and loves to visit them in their dragon ranch, often offering to help them when she's free. She finds her uncle Snowy to be the "best uncle in the whole world", and finds aunt Jasper amazing with her lightning powers and as a myth in general.

Fay is Belle's godmother and official aunt (her "best aunt in the whole world"). Belle loves to spend time with "godmom Fay" when she and her mothers visit the princess (which they do frequently), and they enjoy gardening together, plus doing girly princess-y stuff with each other. Belle finds Fay to be a role model and loves her auntie and best godmom very, very much.

Fay's husband, Airmé, is Belle's godfather, whom she loves a lot as well. She also looks up to him and loves spending time with him too.

The Muskeedorks (composed by Vivienne du Vallon, Athena de la Fere and Victoire d'Artagnan) are Belle's other aunts, darling aunts as well. Belle looks up to them a lot, and wants to be like them when she grows up. They are often hanging out together, and these aunts are really proud of their little girl. They are her self-proclaimed other godmothers.

Snow and Jasper's kids, plus Belle's cousins. Though Belle loves all of them equally, she has a very soft spot for Dove, the little kid of the family. Whenever they're together, they like to cuddle and spend a "sister time", with Dove having Belle as a big sister figure.

Ciel and Fontaine are Belle's best friends forever after. After all, growing up together, they are practically cousins. Spending a lot of time together at school and when Belle frequently visits her godmother, who happens to be the twins' mother, it would be obvious they'd be close to each other. They love each other's companies, and as French girls, are always talking with each other in French. Even though they are "cousins", Belle considers the girls to be her sisters, and loves them as so.

Belle's other great friends. As their parents were friends before them, the girls also bonded and get along very well. While Belle is also close to their brother, Scott-Mertin Moria, she is a lot closer to the girls. She finds Padme simply adorable with all her shyness, and Sola is obviously beyond awesome and cool.

Belle has a big, white reindeer named Audacieux. She loves him dearly and loves to ride him. He was a gift from her mother Destiny, and he is the son of Destiny's own reindeer, Noelle. 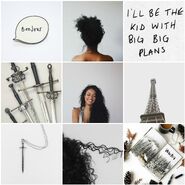 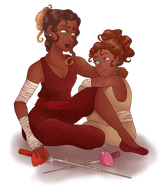 Younger Belle with her mother, Scarlet Anne d'Herblay.
Add a photo to this gallery
Retrieved from "https://everafterhighfandom.fandom.com/wiki/Belle_Claus_d%27Herblay?oldid=305656"
Community content is available under CC-BY-SA unless otherwise noted.