Start a Wiki
This page, Bliss Charming is a work in progress, meaning not all sections are filled out.

I guess I'm just magical in my own way, according to MJ, at least.

Michelle-Jaina Asteria, is the love of my life.

Blossom and I get confused a lot since we basically look the same in the face, so you know I get in trouble for her shenanigans sometimes.

Princessology. I mean it's better than most classes.

I'd honestly say Muse-ic, as one I don't have any skills in music, and it's hardly enjoyable.

Tony-Jacen Asteria, undoubtedly supportive. I guess my siblings too, despite their chaotic nature.

Bliss Charming is a 2017-introduced and all-around character. She is the successor to the princess in The Blue Light. In the destiny-conflict Bliss sides with the Royals, partially liking her destiny. Bliss is sweet and caring, and quite easygoing.

Bliss is vivacious as they come, a ball of joy which can't stop smiling.

She is truly caring about all of her friends, and family. Bliss is told to be the friend that'll be there for you through thick and thin. If she finds out that someone has been messing with her friends, she'll personally track them down (not really, but she might give them a glare or two.)

Another trait she inherited from her name is her bliss. TBA

Bliss has a rather out there appearance. She has green eyes, pale-ish skin, and is 5’7”. But her hair which she dyed in multiple rainbow pastel colors.

How Does Bliss Come Into It?

Bliss was destined to be the next princess in The Blue Light, at a young age.

Bliss is okay with her destiny, so she stays standing as a royal. Even despite the fact she is dating the next witch in her story, MJ (Michelle-Jaina).

Blithe is considerably said to be dead, or well as Blossom had told her, more than dead. Bliss has no personal opinion about her brother, but she just wants to know the truth. Yet at the same time she really doesn’t.

Blossom is just trouble. Bliss does love her sister, despite all her faults. But she can be troubling, known as the troublemaker of the family.

The two met at a Charming ball, Glissade being invite by her cousin, Tom. The two hit it off immediately, and are now good friends. 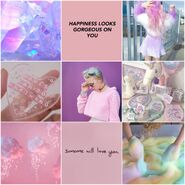 bliss moodboard
Add a photo to this gallery
Retrieved from "https://everafterhighfandom.fandom.com/wiki/Bliss_Charming?oldid=279602"
Community content is available under CC-BY-SA unless otherwise noted.