Rebel-- sort of? I've already signed but I was a minor and contracts signed by minors are not legally binding.

THESE FUCKING BIRDS KEEP FOLLOWING ME AROUND

I’m so single that albums are disgusted by me.

Oh, me? Sometimes I really go too far in what I say and it ends badly for me and other people. But I'm usually right.

Min was pretty awesome to me when I arrived. Cupid's not bad either, but she's a bit light in the head.

Candy Redmond is destined to be the next Rose-Red from Snow-White and Rose-Red (Schneeweißchen und Rosenrot). She has only just been told of her involvement in the tale, which she strongly dislikes. In general she's bittersweet and would much rather decorate cakes than storybook pages.

Candy knows a lot, and she knows she knows a lot, and that's fine but she turns it into an issue. She feels herself a lot smarter than other people, and maybe she is, but her way of acting superior and "enlightened" or whatever really doesn't help her earn friends. In many ways, she is right in what she says, but her penchant for shoving things into people's faces make it very hard to want to listen to her. She's intimidating, and forceful, and really quite painful to be around when she gets worked up about something.

It's obvious that she cares a lot, she cares so much about so many things that it physically hurts. She's an overly passionate, obsessive person, and when she latches onto something, she will see it through to the end at whatever cost to herself or those around her. She has bad tunnel vision when she's trying to accomplish a goal or prove a point, even if she does know in the back of her mind that she is wrong. Candy does like to act like she does have entirely noble, selfless intentions that work for the interests of others, the less fortunate in particular, but she's also very adamant about being right, or at least, being seen as right.

She also judges far too easily. She comes to conclusions a lot of the time without checking for all of the facts and can have really severe tunnel vision at times. Her habit of jumping the gun, however correct she may be, would probably really get her in trouble if she weren't just a kid.

Candy's really pretty, but in a really...ordinary??? way. She looks quite average until you properly take the time to evaluate her features. She does her best to keep her skin clear, covering up any "imperfections" with makeup. It's a somewhat pale olive tone. Her straight dark brown hair reaches just beyond her chin, with a diagonally cut fringe. Although a couple of shades lighter, her eyes are also dark brown and somewhat slanted.

She's got a mainly straight kind of figure, Her shoulders are slightly broader than that of an average female, and while not muscular, Candy is quite fit. She's super tall. She's 5'10.

In short, Snow-White and Rose-Red find a prince-turned-bear save his treasure from a greedy dwarf dude and he turns back into a prince. Snow-White marries the prince and Rose-Red marries his brother.

How does Candy come into it?

Well it turns out Candy is destined to be Rose-Red. Her biological mother is destined to be the poor woman from the story. She had her twins but couldn’t support them. One of those twins was Candy. The other was Winter whom Candy reluctantly grew fond of.

Candy and her twin were given up and dumped into different homes. Candy has absolutely no memory of her mother or twin. She loves her adoptive family a lot and is a big sister figure to their younger children.

She grew up to be smart, both in mind and mouth. She was successful in almost everything she did. She was an otherwise ordinary child.

Then when Candy was finishing Year Eight, ready to sit a scholarship exam for a prestigious High School, she received a letter informing her of the Storybook of Legend’s decision to make her Rose-Red. That kinda turned her life upside down and she absolutely despises the Storybook for that.

Biologically, her mother is some random lady. Candy's bio dad screwed her mother once, left her pregnant and sort of just disappeared forever.

She thinks he's a real bastard of a guy sometimes but he keeps her company and buys her expensive purses when his allowance comes in so it's okay. It's odd for her to try and accept that he's her biological brother when they've been in each other's lives for relatively a very small period of time. They're comfortable with one another, though, and as time has gone on they have grown closer and developed somewhat of a sibling bond. Candy still calls him a capitalist prick eating out of a silver spoon, though.

The scenario in which they met is undecided but they have a cute relationship in which Min flirts with her and Candy goes along with it but really they’re just platonic buds. Candy does stop Min from doing some really dumb stuff though.

So one day this tiny little fat hummingbird decides to start following Candy around school. Candy didn’t really approve of this ‘’thing’’ but it wasn’t leaving so eventually she learned to put up with it. She found herself developing affections for the bird after around two weeks and named it Lafayette (the bird responds to this name) and Lafayette was later identified as male and an Allen’s Hummingbird. Now Candy and Lafayette go around ready to steal yo girl.

Other than that Candy is basically a Disney princess and she can’t take a walk outside without being hoarded by animals. This is fine by her until they start to annoy her and get in her way and under her stilettos because, for all their annoyingness, they are still living things and she does not wish to stab them with her pointy shoes.

who should i ship them with??

Who would I pay good money to see them fight?

Her favourite colour is red and she incorporates it into her clothing a LOT. Cherry red, wine and candy apple red are her main three, though cherry red is the one shown the most. She normally wears plaid. She generally looks simple but pretty. Classy af tho. 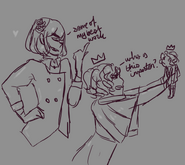 Thanks so much Bel! She's perfect. 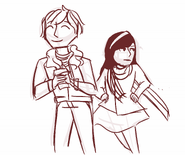 Bel made this amazing little Candy pic <33
Add a photo to this gallery
Retrieved from "https://everafterhighfandom.fandom.com/wiki/Candy_Redmond?oldid=293920"
Community content is available under CC-BY-SA unless otherwise noted.