One day, I’m gonna open Cardyn’s Casino right at the edge of Wonderland and Ever After.

I am literally diamond quality. Call me a lucky witch.

I’m a solitary solitaire. There aren’t any pairs in my deck, and honestly I'm not even looking. Ace is the highest card, you know.

Don’t you just hate it when you break a winning streak? That shouldn’t even be mathematically possible. Or magically possible either.

Riddling! It doesn't make sense and everyone understands me.

Crownculus. Have you heard of this thing called card counting? Never in a gajillion, novemdecillion, duoquinquagintillion years! I don't claim it.

A diamond like me makes for a good best friend.

Queen of Hearts Tarts, but not enough to steal them.

Cardyn D’Amond III [they/them] is a 2018-introduced and all-around character. They are destined to be in Alice’s Adventures in Wonderland as a playing card of the diamond suit. They align as a Neutral, without any genuine interest to either continue the story or write their own.

Some people have started calling them Cardi. They respond to it and genuinely don't care which nicknames you use for them. As long as you make it clear you're addressing them.

Cardyn is a gambler. They tend to be very fidgety, tossing cards, rolling dice or flipping coins to keep their hands busy. They are witty and sarcastic, but is friendly when they want to be. Though Cardyn has good intentions, they can be loose-tongued at times. They are very teasing and flirtatious as they enjoy gauging people's reactions to various and increasingly unpredictable situations.

Cardyn doesn't take things seriously much or at all. Due to pos never truly accepting the gravity of a situation, Cardyn is unwaveringly optimistic and upbeat, always keeping a positive attitude whether warranted or not. Their ever-smiling expression makes it difficult to maintain a straight face in poker games.

While the D’Amond family is not inherently rich and well-off, Cardyn is blessed with insane luck and favor in games of chance and high stakes. Things don’t always go their way, but that’s entirely their fault. Cardyn has the worst pokerface ever, seen to always be smiling and plays more for the enjoyment of the game than the possible rewards. They are reckless and impulsive, something that sometimes leads to them to making bold, occasionally bad, decisions. They are, however, carefree and ignorant about it because of their innate good luck and favour. Things do not always go their way, but they only see it as a hit or miss with their good fortune.

For some reason also, despite their gambling habit and horrible decision-making skills, Cardyn has never properly run out of betting money. They are, after all, a diamond. They are also not very good at math.

They are also very fluent in Riddlish, but purposely make grammatical errors. Mostly to confuse people. Cardyn takes pride in being nonsensical, the best way to show off their Wonderland roots. They are unpredictable and goofy. They even carry 53 printed out business introduction cards that they give out at every opportunity.

Cardyn is also shown to be very nationalistic.

Cardyn’s time is most commonly spent playing games of chance. Preferrably card games given the option, but as long as there’s a game, there’s a Cardyn there to play. Currently, Cardyn runs a very extensive game of UNO® under the Lifairy. Until Giles Grimm's curse-breaking, the Headmaster's brother is said to have aided in Cardyn's "gambling rings."

Previously, Cardyn also showed a slight interest in playing tabletop and board games. They used to play Monopoly for a while, but eventually had stopped after ruining games and ending up in jail more than once with their ridiculously lucky rolls.

They are also believed to have some sort of painting ability.

Cardyn has a naturally very androgynous appearance. As they are non-binary, they are very proud of this and refer to their sheer androgyny as "the dream." They are built slim and tall, with very long legs. Their frequent use of thigh-high boots does not help their case.

Their face shape is much compared to a diamond, having well-defined cheekbones along with angular gray eyes under long eyelashes. They have light-yellow toned skin and platinum blond hair in a soft and messy pixie cut, with a sort of tousled and wind-blown texture to it.

They exclusively wear suits in colors of red, black and white and there must always be a diamond involved in the outfit somehow.

As a diamond playing card, Cardyn's role is to be a courtier. But even they admit they are not the best choice for someone meant to be an adviser to the royal Hearts Family.

Cardyn has multiple relatives, all of which make the playing cards of the Diamond suit. The order of age is unknown, even among the family. Given that they are Wonderlandian, nothing is really supposed to make sense. Their parents are the King and Queen of the diamond suit.

Cardyn is open for relationships~

Among the Wonderlandians, Cardyn's horrible misuse of the Riddlish language gets mixed results. Some, like Kitty Cheshire, appreciate it while others are less receptive. Cardyn's nationalism shows by how much they value the people from Wonderland.

Cardyn has a pet flamingo named Chips Bettigan. He does not answer to anything else but his full name.

Despite being very flirtatious, Cardyn is openly asexual. It gives them many opportunities to make multiple ace puns, which they take advantage of... excessively.

While Cardyn has some admiration for Courtly and her penchant for mischief, Courtly had threatened Wonderland itself, something that Cardyn cannot allow. 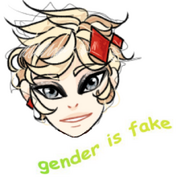 a meme because someone used male pronouns for cardyn and i needed something to reply with
Add a photo to this gallery
Retrieved from "https://everafterhighfandom.fandom.com/wiki/Cardyn_D%27Amond_III?oldid=334408"
Community content is available under CC-BY-SA unless otherwise noted.