Well... it's alchemy isn't it? I want to unlock the secrets of magic that are inaccessible to anyone without a destiny.

I don't have any natural magical ability, but I do have a collection of magical items at my disposal.

I'm not really in a position to be dating anyone... don't fairytales imply that romance between moon-folk and earth-folk will only end in sadness?

Ever since I came to Earth... never mind, it's not important.

Chemythstry- there's something about test-tubes and sulfuric acid that's relaxing...

Advanced Villainy. Like sure, pops wasn't the most stellar of guys but I'm not sure why I have to take this class. I can't do any of the magical stuff and there's only so much I can do to salvage my grade with poison mixtures.

Arcane Corvid, Ty Nishtar and Bays AvT
Chrysopoeia is the protégé of Pan Twardowski from the Polish story of the same name. While they enjoy their story and certainly have no issues with returning to the Moon, they identify as Neutral out of worry that they haven't fully understood the conflict.

Chrysopoeia can be described first and foremost, as driven. Chrys adores knowledge and pursues it tirelessly, to the detriment of their social life. This drive extends to all aspects of Chrys' life

Chrys is incredibly uncomfortable with any sort of authority and it shows. In the presence of teachers, officials or royalty, they will stiffen uncomfortably, speak formally and fear any sort of reprimand. They can't understand how people can talk so casually or jokingly with teachers because of this.

Chrys also has a tendency to be overly secretive

They are also great under pressure,

Chrys grew up around magical texts and so has always held an interest in the potential of magic. However their destiny means that they can only gain magic from the devil, as they have no natural magical ability. Twardowski noticed this, and instead focused on alchemy, the family profession.

Strangely, despite Chrys' lack of introspective skills, they enjoy psychology.

An alchemist called Mr Twardowski makes a deal with the devil for power, on the condition that the devil can collect his soul only when he goes to Rome, a place Mr Twardowski has no intentions of going to. He gains prestige from his amazing feats, such as becoming immortal until one day he steps into a pub, only to be confronted by the devil. It turns out that the pub was called Rome. He flees outside, gets on a rooster and rides it to the moon where he remains. Once a year, he sends his assistant-turned-spider down to earth to learn of current events.

How does Chrys come into it?

After Pan Twardowski's arrival at the moon, he built himself a giant mansion and holed himself up in it for a long time to continue his studies and research, much to the moon residents' bemusement. Years passed, until he eventually decided he should continue his legacy by finding an heir.

Around the same time a couple living in the neighbouring town had a child. Twardowski, hearing of this, goes to visit them in the hopes of raising the child as his protégé. After a series of visits, he eventually befriends the couple, even becoming their child's Godfather. He names them Chrysopoeia, and once they were old enough, takes Chrys to his house in order to teach them.

As this is happening, Twardowski and the MuRong couple gets closer until they marry when Chrys is seven.

Recently, after the yearly spider visit, Twardowski learned of Ever After High and enrolled Chrys there.

Chrysopoeia mainly lives with Twardowski in his large mansion. He's a stubborn stiff old man who barely gives affection and makes Chrys refer to him as 'sir'. Although he may sound like unpleasant company, oddly enough, Chrys finds him perfectly good company, and their role model. Chrys works hard to impress him, and stays in his good books through study and obedience. n

Arcane Corvid- These two met in a local alchemy shop and

Blende is Chrys' familiar, which they summoned with their father's guidance. Blende most frequently takes the form of a large spider, which they are most comfortable in on Earth. She is actually a jade rabbit in her true form, with the ability to take the form of a moon pixie. Blende is highly helpful and always by Chrys' side.

Brimstone is a Cockatrice, born of Mr Twardowski's legendary cockrel and a moon toad. Chrys uses him as their main form of travel. They rode Brimstone during Dragon games, where his basilisk gaze was magically disabled. 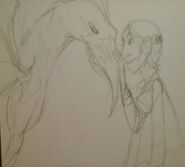 Retrieved from "https://everafterhighfandom.fandom.com/wiki/Chrysopoeia_Twardowska?oldid=276241"
Community content is available under CC-BY-SA unless otherwise noted.