I want to be with my true love... Xavier Witch sigh

I have wings that can fly, flower power and I can turn human size

Xavier Witch is my Prince Charming, but I don't know if he feels the same way about me

I touch a plant in my dorm, it grows until it breaks a hole in the ceiling

Environmental Magic, I love everything this world creates!

Woodshop, Killing trees, no thank you

My besties are Opal Snowflake and Kaly Dream

Clover Spring is 2015-introduced and an all-around character created by Kayjay1025. She is daughter of one of the flowers fairies in Thumbelina, and there are many others with the same destiny. In the destiny conflict, she is on the Rebel Side, that is because she wants to travel the world with Xavier Witch.

Clover is a kind lovebird who is part of the Rose Petal Garden Club. She isn't shy, and she is proud of it! She goes 4 crushes a week, but she thinks she has a keeper, Xavier Witch. She trusts people too easily, but she can keep a secret. Clover is really pretty, but doesn't know it, but she isn't afraid to get her hands dirty. She is a Rebel because she thinks that her story doesn't need her and she thinks that her happily ever after isn't complete without Xavier Witch. People can't help being her friend because of her personality.

People think she isn't that smart, but she just, well, hides her huge brain! She enjoys solving the puzzles in the news paper and playing with Rubix Cubes. She loves flying around with her wings, she thinks it is one of the most wicked awesome things about being a fairy. Clover loves everything that this world creates, even when it could turn out bad. She always looks over the broken fence and admires the flowers, in other words, Clover doesn't judge people how they look on the outside, but look how they look on the inside.

Another reason Clover is a Rebel is because after Xavier and her become a '' thing'' she wants to travel the world and many other worlds (with Xavier, of course.) Clover also loves writing and drawing, that's why she loves writing stories and making posters. She is a tiny bit clumsy, and she doesn't have complete control over her powers. She hates killing trees, and she stands up to people who does those things.

Clover has a tan-ish skin tone, green eyes, flower-like and airy wings, strawberry blonde hair, and is a little short for her age.

How the Story goes...

How Clover comes In...

One of the fairies married another boy fairy and they had Clover.

Clover is an only child, who is very close to her parents.

Everyone is her friend, but if she had to close two they would be Opal Snowflake, who she has known forever after, they are also opposite attacks, and Kaly Dream, who loves nature just like Clover. But she is also very close to Frances Faye Florian, another fairy from Thumbelina. She also befriended Fay Fairer, mostly because she doesn't care that she is "Fairier-than-a-Fairy" and she is a fairy.

Clover has a pet butterfly named Bloom, that she met during the Animal Calling.

Clover has a crush on Xavier Witch and was his date to the End of the Year Dance. 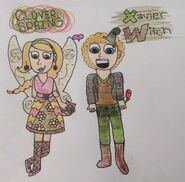 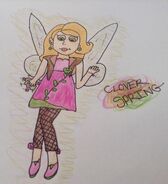 "I love you more than Pizza, Clover!" 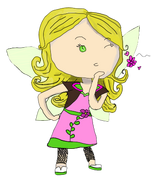 Clover Chibi Art by Amaze
Add a photo to this gallery
Retrieved from "https://everafterhighfandom.fandom.com/wiki/Clover_Spring?oldid=264230"
Community content is available under CC-BY-SA unless otherwise noted.