I want to find true love, no matter how many frogs I might have to kiss!

My kisses have a special magic to them. They don't only just turn frogs into Prince Charmings, you know. Curious? Kiss me and find out~

Hopper and I are destined to be together, but he's too much like a brother to me! We plan to just stay as best friends forever after

You know how some fairytales snort when they laugh royally hard? Well, instead of snorting, I sort of... croak. Like a frog. It is totally not fairest.

Princessology. Smiling, singing and, of course, kissing frogs is hexactly what I do best!

Least favorite subject? Why ever after would I have one? All my class-ics are spelltacular if you ask me!

Dainty Kissington is a 2015-introduced and all-around character. She is the daughter of the Princess from the Frog Prince. Destined to live a Happily Ever After with her "true love", Dainty has no qualms about her story. Well, except for one tiny little detail... She doesn't love Hopper Croakington, her destined prince. Even though she wouldn't trade her Once Upon a Time for anything, she is determined to find her real true love to spend the rest of her fairytale life with, which is exactly why she considers herself to be a Roybel; she's not entirely Royal but not entirely Rebel either.

In English, Dainty Kissington is voiced by Kristin Chenoweth.

Dainty's live-action portrayal (not yet set in stone) is Taylor Marie Hill.

Sometimes there's only one way to describe Dainty: perfect. She's pretty and popular and sweet, and no one seems to ever have anything bad to say against her. She's the sort of girl to try and befriend literally everyone she comes across, whether they're rude to her or not. This princess is almost as well loved as Apple White is, and some may find that to be just a tad bit annoying. Innocent and feminine, Dainty is a polite Southern Belle with a natural charm and tact that suits her royal status. Having Charming lineage thrown in her heritage from her father's side, Dainty most certainly has managed to pick up some hereditary traits from them, most notably her grace and charity. Dainty is the spitting image of what a princess should be: compassionate, loving, sweet, and demure.

However, no matter how well this princess can act, she still has flaws, and she's not nearly as perfect as she appears to be. She is skilled with misdirection, and can change the subject with her charm and tact so easily and smoothly that it's almost scary. Whenever a touchy subject, such as her story or her family, comes into view, she does everything she possibly can to avert the topic onto something else. However, she's also not above lying in the slightest. One of Dainty's flaws is how dishonest she is. She is constantly lying and putting on an act about how perfect she is. For example, everyone believes Dainty is just like all the other princesses - pretty, rich, with a nice, loving family. Nobody knows about Dainty's real familial issues. But to Dainty, it's not a huge deal if it means keeping her perfect image perfect.

Dainty can also be rather manipulative. Sometimes, she doesn't mean to be and it just sort of... happens. Her silver tongue allows her to paint imagery into stories and tug at the heartstrings of others. So far, her manipulation tactics haven't worked on only one person in the entire fairytale world, and that's her own mother. Dainty's mother has led the girl to have multiple inferiority complexes, as well as having trouble expressing herself clearly. Part of the reason why Dainty is so keen on appearing perfect is because she believes her mother will finally be proud of her - or at the very least acknowledge her. In truth, Dainty despises her mother but still yearns for the approval of her a parental figure nonetheless. And she hates how dependent she is on it as well. In fact, Dainty tends to hate a lot of things, and only acts like she hates nothing. After all, a perfect princess doesn't "hate".

Something else to note about Dainty is her romantic outlook on life. Exceedingly charming, Dainty is a firm believer in "true love", and she'll do practically anything to find the one meant for her. Sometimes, she'll try and play matchmaker for her friends. She's no C. A. Cupid, but she's set up some decent matches here and there. The "art of romance" - as Dainty would call it - is a very delicate and precious thing to her. When she talks about love, her tone becomes very soft and endearing. To her, love is more than just some sappy emotion - It's a bond that you share with someone special to you. Dainty would love nothing more than to find her one true love, although she does have pretty high standards. Still, that doesn't stop her from flirting incessantly. She doesn't mean to do so, but it just happens. It's a blessing and a curse.

Although she is searching for her one true love, Dainty flirts a lot. Part of it is because she is genuinely interested when she sees an attractive male. Another part of it is because it's just in her nature to flirt, and she does so without even realizing she's doing it. But another part is because it serves as a distraction from her other issues in her life. For example, her relationship with her mother, the pressure she feels to be with Hopper, her self-image issues, etc. etc. Whenever she flirts, the attention is on her. And she thrives under attention because she never got any when she was younger.

Due to wanting to impress her mother and live up to her peers' expectations, Dainty is constantly acting like someone else. Her true self is very bitter and world-weary. Although she might reply very sweetly and kindly with her words, in her thoughts she is often thinking something quite sarcastic. Her sharp-tongued personality is something that only Hopper and herself are aware of. So far, nobody else has witnessed Dainty's true emotions. However, because she has pretended to be someone for so many years now, she can be sincerely nice and compassionate, but mostly, she is a jaded and pessimistic sort. She has a rather strange sense of humor that borders on dry and cynical. If she were to sincerely be herself, most people would be shocked that such a pretty princess is acting that way.

As a hardcore romance fan, Dainty's main interests are often romantic novels and movies. Chick flics are also her jam. Some of her romance collection are so embarrassingly cheesy that she hides them from prying eyes. Only her closest friends are aware of her mountain of over-the-top romance books stashed somewhere in her room. Dainty also loves to flirt. It's basically her #1 hobby at this point. Although she sometimes actively seeks out "cute princes" to flirt with, sometimes she ends up flirting without even realizing it. Sometimes she'll even flirt with girls and not even notice it.

Speaking of romance, another one of Dainty's hobbies include matchmaking. She might not be the daughter of Eros, but if there's one thing Dainty is passionate about, it would be love. Since she's not magically gifted with Cupid's arrows, she has to matchmake the old-fashioned way, which, if you ask her, is a lot more fun anyways. If any fairytale has romance trouble or wants to be set up with a blind date, Dainty is more than happy to help! Sometimes, she'll guest star on Cupid's MirrorCast or fill in for her whenever she's not around to give love advice herself. Dainty says that the experience she's getting from it all is going straight to the romance novel she's planning on writing someday.

Dainty also loves to volunteer at the local animal shelter. Whereas some people try to avoid the slimy amphibians and reptiles they have there, Dainty is more than happy to help them. Even though the joke "So, how many of the frogs have you kissed here?" is getting really old, Dainty enjoys it nonetheless! She can be seen spending a good chunk of her weekend handling the frogs, snakes, and lizards and trying to show everyone that they're not as scary or gross as most people think.

As someone who spends a lot of time stressing about how they look, Dainty naturally has gotten handy with makeup throughout the years. She has an extensive collection of makeup, most of it consisting of various lipsticks. Although her favorite is definitely her usual ruby red lip color, she's got every shade of the rainbow in lipsticks and lip gloss. Dainty prefers to do makeup for herself, but isn't opposed to giving others advice or make-overs once in a while.

Dainty has long, curly dark rose pink hair and pretty blue-green eyes. Her color scheme is mint green, baby pink, and gold. She has a very preppy sort of style and tends to wear lots of lace.

How Does Dainty Come Into It?

Dainty is destined to be the princess who meets the frog and transforms him into a Prince Charming by kissing him. Even though she does love her story, she just wishes that her Prince Charming would be someone who she actually loves - and not as a brother. However, a part of her also fears that because not all princesses have the necessary magic to transform Hopper back into a human that if she doesn't go through with it, Hopper might be doomed as a frog forever

Although she adores her tale and wouldn't change it for the world, the idea of her destined prince being Hopper Croakington, who she views as nothing more than a brother, doesn't sit well with her. Being a more selfish person, Dainty focuses more on her story and doesn't care what happens to other peoples'. That's why she tends to stay out of the Royal and Rebel debate because she doesn't have much of an opinion on either side. That's why she has decided to join the Roybel side. 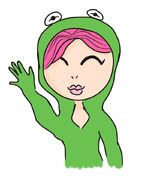 Dainty in a Kermit onesie is a real thing, guys art (c) me

A huge thank you to Alpha for drawing this <3 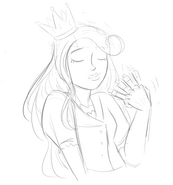 adorable gift art (c) patch
Add a photo to this gallery
Retrieved from "https://everafterhighfandom.fandom.com/wiki/Dainty_Kissington?oldid=263532"
Community content is available under CC-BY-SA unless otherwise noted.