18 is the closest approximation. Taking on the appearance of a young adult is a bit of an overused tactic by this point but it's the type of unoriginality that wouldn't get you sued.

Any with a devil, although I believe the general consensus is the girl without hands or the devil with the three golden hairs.

I'm not aiming particularly high with my desires. I'd like to survive til the end of the day and that's it.

I can undo damage and trick people into believing the world is a better place than it is. Skewing perception which more often than not leads to self destruction. I wouldn't recommend it.

Humans don't really seem to trust me. I'm not particularly interested in fear tactics and I would prefer to go about my day without being pepper sprayed.

Cooking Class-ic isn't bad for what it is.

General Villainy. The lessons are contrived as all Hell, and believe me, I've seen Hell.

Dante Sinistrum (he/him) is a demon who has formed a contract with the next Girl Without Hands, Beatrice Miller. Despite this arrangement,there is some doubt around his role, as the Storybook of Legends chose a completely different tale for him to follow- The Devil With Three Golden Hairs. This raises some pretty significant issues, both for himself and Beatrice. Dante identifies as a neutral for the moment, as he doesn't want to be misperceived as conforming to a specific viewpoint while he tries to figure out how to change his story.

Dante's not one to attract much attention. Barely talking, rarely smiling and not expressing any particular opinion towards anything, it's no surprise that the majority of the time he simply sits in the background looking vaguely creepy.

He's not too interesting to talk to either. He seems to be generically polite and rather emotionally closed off, making him difficult to connect to. While he does express opinions, they seem to be formed solely from logic and rules. As such the only time anybody really opts to talk to him is in class because he takes useful notes.

This is more of an act than it is due to him being legitimately dull. Dante is a pretty paranoid guy, and as such he feels more comfortable flying under the radar. He feels pretty awkward about expressing himself to others unless he's been friends with them for a while.

Dante is a short demon with a medium sized build. His skin has a notable greenish tinge to it that hints at his other form's reptilian nature. He has brown monolid eyes, with his pupil and iris resembling that of an alligator. His eyes are framed by ferrous grey spots, markings that are consistent through both of his forms.

He has a square face with a rounded chin. His ears are large and pointed. A pair of straight brown horns protrude above them, curving backwards. His teeth are inhumanly sharp. Dante has pale green hair with a few golden hairs streaked though it- not enough to be noticeable but enough to qualify him for a story apparently. Dante isn't too fond of them.

The main thing Dante keeps on his side of the room is a large glass tank for his pet python, complete with a large heat lamp. Sometimes he likes to use that heat lamp himself when he's reading but that's private information. Dante also has a neatly organised desk, usually with a few library books and occasionally his laptop sitting on top. He keeps the rest of his possessions hoarded away in a leather suitcase under his bed. For convenience, he says.

Dante and Dante- Thank u zee 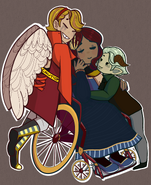 Retrieved from "https://everafterhighfandom.fandom.com/wiki/Dante_Sinistrum?oldid=304749"
Community content is available under CC-BY-SA unless otherwise noted.