Fay Fairer! She's not only my roomie or my friend, she's my sister. <3

It's my duty as the next Santa to make people happy, so my biggest heart desire is to make everyone around me happy! :D

The toys I make are particularly the best! Also, when I'm happy and joyful, I can spread some kind of harmony magic! It's snowonderful! ^u^

Staying up all night and then having to wake up very early for school isn't always the best choice I make...

Woodshop is the way to go!

Fay brings all the colours to my life and Bry has been with me since we were nursery rhymes!

Destiny Claus is a 2015-introduced, 2020-revamped and all-around character. She is the elder child of Santa Claus, and destined to take his role in Christmas Folklore. Destiny currently attends Ever After High in her Yearbook Year, and sides with the Royals on the destiny conflict. She cannot see herself as anything other than the next Santa Claus, and carries her family's tradition with love and passion.

Kind, warm-hearted and caring, Destiny genuinely embodies the personality she grealy values when adding people to the Naughty or Nice List. Known to be always very considerate and respectful, the next Santa is truly careful not to cause inconvenience or hurt to others, being unable to cause any pain on purpose and always being cautious to not do so unintentionally. Everything Destiny wishes is to bring nothing but love and kindness to those around her, so she truthfully considers every little action of hers to make everyone's days a little better at least. Always with a big and welcoming smile on her face, Destiny is very much known for her happiness and delight in living, trying her best to bring both these qualities to all of those who surround her.

Exceptionally optimistic, Destiny sees life the way it could be, not necessarily the way it is. She is truly hopeful and confident about the future, and never fails to see the bright and positive parts of a situation. She always tries to be encouraging and supportive to everyone, reassuring them that "tomorrow will be better than today if you believe it". She has a soothing personality, and her gentle way of speaking is truly able of cheering up and comforting those who need it.

Destiny is very affectionate, fond of showing her love and tenderness to everyone she knows, especially those who are close to her. Unintentionally, she might sometimes lack the idea of personal boundaries, as she is positive that everyone will enjoy some displays of affection (even though they might not). Growing up surrounded by love, Destiny only wishes to give it to everyone who might not have received it during their lives. Due to that, Dest is quite a social butterfly, and it is pretty easy to befriend her, regardless of your legacy and possible moral alignment defined by your fate.

On a side note, however, the next Santa can be quite unsure of herself and constantly wonders if her friends and family really like her. Alas, she needs a frequent reasurance that she is loved and she is darling to people, and will spend a lot of time procrastinating about what others think of her. Sometimes this insecurity will bring a bit of trouble to her days, but it's nothing that can't be solved with a little bit of extra love.

Unfortunately to some, Dest tends to have a lighthearted manner in serious situations, and this often leads her friends to not take her seriously most of times. That trait of her personality often brings Destiny to not take situations too seriously, even the worst of them. However, this isn't as bad as it seems. Destiny's light way of dealing with situations can help her friends deal with it with lightness as well, and see that things are not as bad as they imagined. Destiny, despite having some childish attitudes sometimes, is truly innocent and has a pure and sincere heart.

Destiny is a fair individual who greatly values justice and does everything in her power to treat everyone equally, but not necessarily accordingly to what they deserve. She might not be as stern as she should while coming up with the Naughty & Nice List, believing that everyone should have a chance to redeem themselves. The young Santa is forgiving, though she doesn't forget easily (if you redeem yourself by behaving this year, you're on the Nice List; but if you misbehave the next year, she won't hesitate much before adding your name to the Naughty List).

Alas, Destiny can be fairly anxious, and her mind thinks a lot about things she probably shouldn't worry at least for now. It is not uncommon to notice that she seems breathless sometimes due to speaking too much too fast, or to notice the purple bags under her eyes from not sleeping at night planning everything for the next Holidays (and, by extent, keeping her roommate up sometimes as well).

Overall, Destiny's life has been greatly centered around her destiny, and her fate means everything to her. She truly incorporates what the Holidays are meant to be, having a jolly manner, spreading words of love, giving love and delivering presents to students and the school staff whenever she is feeling like doing so. You will probably find her singing Christmas carols right now and she excitedly works on a new toy she's building. It also wouldn't be much to say that she is a natural ruiner of Halloween parties (so you probably shouldn't invite her).

Destiny is much smaller than average for her age, standing at 5'0. She is a girl of pale skin, bright pinkish-purple eyes, roundy rosy lips and pointy/elven-like ears. She has long, curly blonde hair with red highlights, which she generally keeps up in Victorian/Edwardian-styled hairdos so it doesn't get in her way while she works. Her clothing is inspired by a mix of Edwardian and Victorian Winter fashion, and her colours are generally red, green and golden. Her motifs include Christmas-themed patterns, such as mistletoes, poinsettias, reindeers and bells.

The set of Christmas-related magic Destiny has includes:

Santa Claus, also known as simply "Santa", is an important figure with legendary, historical and folkloric origins who, in many Western cultures, is said to bring gifts to the homes of the good children on 24 December, the night before Christmas Day. In modern folklore, Santa Claus is said to make lists of children throughout the world, categorizing them according to their behavior, and to deliver presents, including toys and candy, to all of the well-behaved children in the world, and coal to all the misbehaving children, on the night of Christmas Eve. He is said to accomplish this feat with the aid of his elves, who make the toys in his workshop at the North Pole, and his flying reindeer, who pull his sleigh. He is commonly portrayed as living at the North Pole, and laughing in a way that sounds like "ho ho ho".

How Destiny Fits Into It

When little Nichole was born to Elden and Annalina Claus, twenty three minutes before her twin brother Snowden, no one really thought she would be the one to inhert Santa's legacy. In fact, being the very first female born to Santa Claus when all her ancestors were first born male, there has been some discussion about who would be the next Santa: Nichole or Snowden. After much deliberation (and acceptance by the Storybook of Legends itself), it was decided that the girl - Nichole - was the legitimate heir to the Santa legacy and thus would be the one getting it. Truthfully, it would be impossible for them to have made a better decision than the one to give this legacy to Nichole - who'd grow to be nicknamed "Destiny", both because of her optimistic personality and because of her overall love for her fate. Destiny honours tradition and, just like all of the previous Santas, would never turn her back to her destiny. Her biggest wish is to eventually take her father's role and bring the happiness she is destined to bring when December comes.

(Borrowing this idea from Taleart!)

By my dearest Jade <3

GORGEOUS Birthday Ball Destiny by my most precious Jade-The-Tiger! 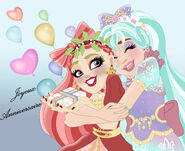 Jadie I love u 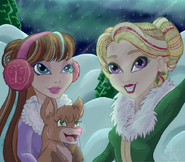 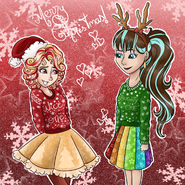 Something very simple of these babies!

I don't have much to say about this one, but I am beyond glad it exists.

Patchy is the cutest!

Patchy has the loveliest style uwu 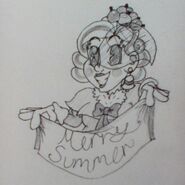 By Patchy, of course!

GardenOfDaisy has melted my heart!

I just really love this pearl by Homiestars 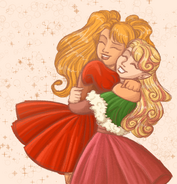 With Addy! I love them!
Add a photo to this gallery
Retrieved from "https://everafterhighfandom.fandom.com/wiki/Destiny_Claus?oldid=348677"
Community content is available under CC-BY-SA unless otherwise noted.