The Snow Queen (The Edelweiss)

I'm getting everything that I need. I know my family loves me, but I don't know if I'm giving it back. I just want to feel love.

There's a kingdom of goblins following me everywhere. I don't know where they hide themselves but they're here and they'll do anything for me. It is also believed that my tears could make flowers bloom in the icy mountains... though I've yet to shed a genuine tear anyway.

Oh, you know... Fate and all that. It doesn't really matter.

I don't know how Darling stands it. Everyone just asking for your hand in marriage and telling how much they love you. The goblins take care of it though.

Theatre. Not being able to feel gets some upsides when you pretend you can.

Wooing. I'm always on the other side of the room with the other damsels and every prince who opens his lips my direction gets tossed. It's bad for grades.

Hot chocolate gives me a warm feeling inside.

Cold, cutting and calculated, Edelle Winter is every bit the Snow Queen she is destined to be, but break the ice and you will find that there is more to her than just a frozen heart. Deep down, she's a romantic, and as soon as her "Once Upon a Time" begins and her curse is broken, she might finally learn how to feel.

Edelle Winter [she/her] is part of the Snow Queen, a less famous Andersen tale by the same name, as the next Snow Queen. In the destiny conflict, she has chosen to be Neutral, because it closely reflects how she is emotionally. She is, however, willing to follow through with her destiny so that she can finally know what it's like feel.

She is cursed not to feel complex emotions like love, so imagines it in her head. She values her family and friends greatly, and if not for them she would be fine with her frozen heart curse and a complete Rebel against her destiny.

Much of Edelle's external personality is a facade, mostly because she has to work around her curse. The only emotions she can feel are the four core emotions, and the feelings themselves are at best very shallow. She can feel happiness, sadness, disgust, anger and fear. However, she cannot easily comprehend her feelings as well as troubles with expressing them. She has an amazing pokerface though.

Despite her limited emotional capacity, she displays an admirable emotional range when she's acting. She is calculated and known to script any expected conversations before they come up. She is also practical doesn't talk any more than what needs to be said. During projects, many of Edelle's co-workers describe her as a very professional actress.

Edelle doesn't like to complicate things or create drama, and is very organized in all aspects of herself. She is observant and attentive. If she's watching a film (something she loves doing, by the way), she would rewind all the time to make sure she catches every single detail. This is relevant to how good she is at faking expressions, having already seen masterful portrayals of emotions on screen. Her attention to detail is probably what made her aspire to become an actress when she was younger.

Though she has a reputation for being calculated and very cold, Edie is an idealist. Being raised in the isolated Snow Kingdom, she doesn't have much experience with many things and turns to movies for method research and reference. She studied movies as a child, but since starting out at Ever After High, Edelle fell in love (or whatever is the equivalent for her) with theater and stage performance.

Because of her curse, she can also be at times insensitive, inappropriate and unpredictable. She poorly misunderstands most social cues and would end up smiling at a funeral, and her lack of emotional comprehension make it hard to guess exactly what she's feeling and what she'll do next. Edelle's idealism and attention for detail also make her extremely critical of others, and her insensitivity just make her voice these criticisms without regard for how the other person might take it.

Edelle looks every bit like the Snow Queen she is destined to be, even down to the snowflakes that seem to be etched on her pale skin. She has lusciously curly silver hair with streaks of pale gold and pink. Her eyes are also the same stony silverish-blue. Given the cold of her home environment, her face bears a perpetual blush. She appears shorter than most of the girls her age, though this might just be due to Edelle's refusal to wear heels.

According to the internet, the story doesn't really have a definite title. Some would call it The Edelweiss, or the Story of the Edelweiss. Or the Snow Queen. For confusion's sake, it's this:

Main Article: The Snow Queen of the Edelweiss

How does Edelle come into it?

After the Snow Queen shed a tear and became a woman, she went back down to the world of human beings. However, she was ostracized by them and had fled even further up north, to her sister: also the Snow Queen. The two sisters have lived together ever since.

Edelle was not born however. The Snow Queen still did not trust that she could find love, even if she was no longer an ice fairy.

After Crystal Winter was born, Edelle's mother wanted a child of her own. Several tears were involved until there was a baby. Edelle and Crystal are a few days apart.

A week or so after Edelle was "born", Destiny itself, or Fate as they called it, the one who cursed the Snow Queen, came through the frozen doors of the Ice Castle and decreed that Edelle would never be able to find love or feel until an edelweiss blooms again.

Edelle is the daughter of the more famous Snow Queen's sister, also called the Snow Queen. There were a lot of problems during dinners. But for simplicity's sake, we'll call Edelle's mother Edelweiss Queen.

Mrs. Winter is the older sister of the Snow Queen pair and cares deeply for Edelweiss Queen. They each treat their own neices as their own.

Edelle's cousin is Crystal Winter. They're close, as Edelle lives in the Winter Castle with her. Edelle is Crystal's top cheerleader in family ice hockey games. Crystal and Edelle treat each other like sisters. It's a really healthy relationship.

Edie can say she loves them to bits, but that's the curse's problem. She can't feel it but somehow just knows. She wants to break her curse so that her family can know too.

Edelle's is acquainted with many fairy tales, but can't say any of them are her best friends. She keeps her friend circle relatively small. Edelle truly values her friends, and would never compromise her relationships with them.

Edelle's roommate Aiko K. Cupid is probably the sweetest and closest friendly relationship Edie has. In an alternate reality, there's probably a sitcom of these two. A love goddess and an ice princess cursed to never be able to feel love...

Edelle has previously sought the help of a child of Eros, Aime E. Cupid, to help break her curse. While Aime has admitted to being unable to break the curse, they've remained friendly ever since. Occasionally, you can catch the two in deep discussion... though the topic of conversation is still usually Edelle's curse.

From a scientific/magical standpoint, though Aime still can't break the curse, the demigoddess is very interested and intrigued by the case of Edelle's curse anyway.

Edelle is known to walk around with her dire wolf, Wolfram. Wolfram is emphatically linked to Edelle, and exacts her emotion where she can't.

Edelle cannot be angry, but Wolfram can. And it's dangerous. (But Wolfram is actually that dog that likes getting belly rubs and gnawing on pillows. It's the goblins you should be terrified of. This dire wolf is a big softie.)

Though destined to never find love, and cursed not be able to feel complex emotions, Edie is a romantic deep down who loves love and the idea of it... but has no actual aim to find it. She is asexual aromantic. She likes the idea of love, but values it in a more platonic sort of way. Her asexuality also has nothing to do with her curse. The curse was only convenience on her part.

Once her curse is broken, her frozen heart will melt and she will be able to feel. She's fine with it either way, really. As an aro/ace, being destined never to find love is just ... chill.

art and design by haneeys <3!! 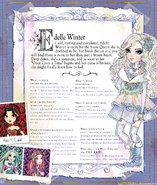 edelle's box bio
Add a photo to this gallery
Retrieved from "https://everafterhighfandom.fandom.com/wiki/Edelle_Winter?oldid=317887"
Community content is available under CC-BY-SA unless otherwise noted.