Hamilton tickets, even Rumpelstiltskin couldn't come up with a trade between tickets and my first and second born.

Do I look like I have a hexing hamartia?

. Elisabella is the youngest daughter of the eldest daughter in Belle-Belle ou Le Chevalier Fortune, chosen to be the next Belle-Belle/Fortune among her 2 sisters and 6 cousins in the Cavalier family.

Dramatic, theatrical, and bold, Elisabella is the kind of person who easily lights up any room she enters. Not exactly interested in the dragon slaying part of her destiny, Lisa (as she is commonly addressed) is definitely up for her disguising part of her destiny- excited for the biggest theatrical role of her life- pretending to be Fortune. Elisabella is also known as the current president and stage manager of The Drama Kings and Queens. 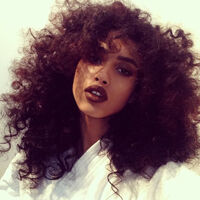 Elisabella is the kind that can light up and entertain a room when she enters. Though not the most intelligent, Elisabella is talented in the fields of performing and she knows it and uses it to fuel her confidence. With such confidence, she is able to draw people to speak to her and charm her way into people's hearts and basically fit in with any clique of people she encounters. She's friendly and open to talking to basically anyone that will listen to her, and can be considered everyone's best friend.

>extra theatrical: will literally start speaking like a Shakespearean king in the most random situation

>Super fun to be around cause she's really impulsive

>talks too much (can talk for six hours straight)

>likes to play the piano

Elisabella is biracial with Egyptian-Moroccan heritage from her father's side while having French heritage from her mother's side. Lisa is noticeably tall for a girl, at 5'10", with a slim build and brown skin. Other recognizable things about her is her thick curly black hair that reaches her midback and the ever-present amused glint in her brown eyes. According to Elisabella, her hair always tends to frizz hence why she always prefers to braid her hair in a lot of different hair styles. Elisabella possesses a boyish quality in her features, due to her strong jaw line and cheekbones, though it doesn't take away from her natural beauty.

Raise a glass to the four of us, tomorrow there'll be more of us, telling the story of tonight.

How does (name) come into it?

aka The Drama Kings and Queens

what weirdo thing lives with them?

who should i ship them with??

Who would I pay good money to see them fight?

Elisabella's style is usually a combination of male and female clothing pieces- from dinner jackets with floor length golden skirts to poofy male blouses with cravats and a lolita-styled skirt. Anything's pretty much fair game to Elisabella. Her color scheme includes a lot of metallic pieces with soft colors.

Retrieved from "https://everafterhighfandom.fandom.com/wiki/Elisabella_Cavalier?oldid=241888"
Community content is available under CC-BY-SA unless otherwise noted.