Start a Wiki
Evanescent Charming is another of the school's many Charmings, who in her Legacy Year was assigned to the fairytale The Riddle as the next princess.

Evanescent, despite her status as a 'popular girl' is considered a laughing stock around the school due to the infamously terrible perfume brand released in her name, one colloquially described as 'smelling worse than a dead horse.' Beyond that, Evanescent seems to keep a relatively low profile, fading into the generic Charming crowd.

The Riddle or something? Don't know, don't care.

Same as anyone else really. To get out the other side of the school system in one piece.

I can charm insects.

Dating whoever wants me. I guess.

I... everything in the world's just so like fragile. It's just a matter of time before everything goes wrong again.

Damsel-in-distressing. The teachers are insufferable, and the urge to punch princes in the teeth is very hard to resist.

Sullen, petty and irritable, Evanescent keeps people at arms length solely by virtue of how unpleasant she is. She seems generally disinterested in the people or happenings around her. She can also seem rather elitist as she only really hangs out with other nobility, and is pretty rude to anyone else.

Evanescent is one of the many students who's just playing their parts and nothing more. She hangs out with popular people and does popular people things like going to parties, and shopping. She rarely looks like she enjoys any of it. Evanescent always possesses a kind of hostile edge and never seems to be happy.

She is a complete conformist, and it's very calculated on her part. Evanescent isn't unintelligent, and she is always up to date on all of the school gossip and trends at all times. She is very fixated on fitting in with others, at the cost of her own happiness. She doesn't even bother trying to appear like she is anything more than a shallow trend follower, and so that's how she's seen. However she despises it. Completely and utterly.

The truth is that Evanescent intends to be forgettable. She is full of self hatred, and is wracked with guilt about the things she's done in the past. Everything about her image, from the infamous perfume line, to the blandness of her reputation were orchestrated by her family to distract anyone from digging up the actually damning information. As such, Evanescent feels like she has no choice but to grit her teeth and tolerate it.

So... the question would be, what kind of person is she? An unhappy one. She always exists in a haze of stress, and this makes her very very irritable. She wants to be a good person, but she doesn't know how sincere that desire is. She has a tendency to stay silent and suppresses her true opinions on things. No one really knows much about her, because she finds it too much effort to express herself, or talk about how she's feeling. Due to this reluctance to speak honestly, she ends up being quite passive-aggressive. She'll say things, but never directly to someone.

She's generally pretty bitter. She feels like she's blown her chance to be the person she wants to be, and so she resents... pretty much anyone who's doing well in life. When other people get positive attention, or she's overlooked, she feels empty. She's developed kleptomaniacal tendencies, often stealing from people who seem better off solely out of jealousy. She finds anyone overly friendly, or saccharine incredibly annoying. However she tends to force a polite smile. She considers them better people than she'll ever be.

She has an almost vicious love of gossip. Anyone getting torn down from their position of positivity Should she open up to someone, she's... not very different. She's quite cynical and sarcastic, for better or worse. She believes that the world is unfair, and while her belief is founded on rational reasons, she often twists it in a way that fuels her negativity. She has an extreme inferiority complex, that leads to her having a lot of mood swings within a short space of time. However she tends to stay on the negative side of the scale. Evanescent dreams of being someone great, and people liking her. However she feels trapped by circumstance.

Although not immediately apparent because the way she presents herself is so rough, Evanescent does have her good traits. She deeply adores her friends and would do absolutely anything for them, even if that required a great deal of personal sacrifice. She never feels comfortable doing anything nice in a public context, but with her actions always speak louder than words. She does a lot of nice things that easily go unnoticed by the majority of people. She doesn't like or trust anyone who just talks, regardless of how good they are at it. She considers it pretentious at best and manipulative at worst. She greatly prefers practical people.

Evanescent is also a great believer in responsibilty. Once you dedicate yourself to something you should give it your all, no matter what. She's actually part of the Royal Student Council, often doing secretarial and odd jobs for it. Anyone who doesn't take the things they're supposed to do seriously irritates her.

Evanescent does her hobbies alone and only her friends really know what things interest her, since she's so closed off about things.

Evanescent's family doesn't have the finances or the patience to give her any sort of pocket money. Which can be...very inconvenient when trying to blend in with a social circle who have more money than sense. Evanescent works a job at the Hocus Latte after school. She's very self conscious about it, feeling like other royals judge her for it, but it's still preferable to asking her family for money.

Evanescent isn't particularly into art, but she always kind of thought that ancient art history (particularly how pigments and paints came to be) and when she found out that making paint was a thing people still did, she decided to give it a try. Unexpectedly, she loved it, and it's become a full fledged hobby. She doesn't really do anything with them once they're made, she just enjoys making them.

She quite likes fashion. It gets passed off as a shallow interest, but she's actually very knowledgeable on the subject.

She's not very interested in them, but she's grown tired of being insulted for Evanesce Cosmetics and decided to get good at making them as a matter of principle.

When they see her jogging in the mornings and evenings, people tend to assume it's just a fitness or a weight thing, but Evanescent just genuinely loves running. In middle school she was very into athletics but she gave it up in high school as part of her identity change. She seriously misses it, and seeing anyone doing athletics kind of pisses her off.

Evanescent has a serious fondness for tv shows and movies, and watching tv is her main form of relaxation when she' stressed. She has a tendency to watch anything, as long as it seems interesting. Although she doesn't dislike reality tv, her favourite things to watch are documentaries. She has a huge fondness for low budget, indie and obscure movies as well.

How does Evanescent come into it?

Evanescent Charming, formerly Fleeting Charming is the daughter of a mid-ranking Charming family. And that's all she wants you to know.

Evanescent's relationship with her family is... strained. Since Vanessa's actions literally forced their entire family to uproot and recreate themselves, suffice it to say they're not too receptive to anything she does, as long as it follows the basic guidelines they've outlined.

This means that Evanescent rarely gets in contact with them.

Evanescent knows Nobelle from her job at the Hocus Latte. They don't talk much if at all outside of work stuff. Evanescent thinks that the clique stuff Nobelle's involved in is pretty ridiculous, which is why she just kind of ignores them.

Despite being a self professed cat person, Evanescent owns an italian greyhound named Damsel (after the insect, not the role.)

Evanescent is a lesbian, and has told no one. Due to this and her tendency to play along with social expectations she's unwittingly become part of half a dozen will-they-won't-they situations with various princes. Hint: they won't.

As far as her type goes, she likes princessy types. She considers anyone princely or knight in shining armour-y, male or female the direct antithesis of attractive. Especially if they imply they want to save her. 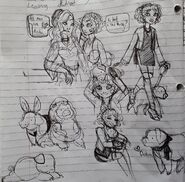 Retrieved from "https://everafterhighfandom.fandom.com/wiki/Evanescent_Charming?oldid=309679"
Community content is available under CC-BY-SA unless otherwise noted.