I want to be the best princess I can be! And, um, maybe I would like a destiny of my own...

I haven't found my Prince Charming yet.

Sometimes I feel like the odd one out in my family. I'm super social and outgoing, the rest of my family is more on the shy side.

Damsel-in-Distressing is just awful. Mom says she didn't like that class either.

Ciel, and pretty much anybody out there who would like to befriend me!

Fontaine Fairer is a 2015-introduced next generation character. She is the daughter of Fay Fairer and Airmé Arc-en-ciel. She would be destined to be the next Fairer-than-a-Fairy in the fairy tale of the same name, but the destiny goes to her older indenticle-twin sister, Ciel Fairer. She does not mind this, happy to write her own story.

Fontaine is extremly outgoing, social, and cheerful, quite unlike her parents who were shy at her age. She is often invited to parties and such because of these traits. Despite her "loud" personality, Fontaine always minds her manners, being brought up by very polite parents.

Fontaine is quite the night owl, and hates getting up early, and often comes downstairs in her pajamas with a bedhead while her parents and sister are dressed and ready to go.

One of the things Fontaine enjoys is throwing slumber parties. This can be a problem because her sister is an early bird and likes going to bed earlier. This can cause arguments, but the twins usually work something out.

Fontaine does fine when it comes to schoolwork, but she doesn't enjoy it very much. She feels very guilty about the fact that she will leave her homework for her sister to do. Ciel normally doesn't mind, but Fontaine thinks that it is a bad habit that she needs to get rid of.

She is a hexcellent gardener, something she picked up from her mother. Fontaine doesn't mind getting her hands dirty, and if you were to visit her home you would discover a spellbinding garden that is so large and spectacular that you would wonder how a 14-year-old could possibly mamage taking care of it.

Fontaine also enjoys switching places with her sister Ciel every once in a while and messing with people. It makes people unsure whcih twin they are talking with. Although really, the twins can't act each others personalities for to long.

Fontaine is a beautiful girl with her father's thick red-gold curls and her mother's sparkling teal blue eyes. She and her sister Ciel look exactly alike, and you can only really tell them apart by the fact that Fontaine dresses with a more modern style and Ciel where's outfits that are inpried by tradional French clothing. She is has a height that is below average. She pretends to not mind, but she wishes that she were tall.

Once upon a time, a king became the father of a daughter so beautiful that he named her Fairer-than-a-fairy. However, this angered the fairies and they sent an elderly fairy with only one eye and one tooth to kidnap the young princess The old fairy took the girl to a castle and charged her with taking care of two glass bottles that contained a magic liquid in which the old fairy soaked her eye and tooth at night as well as tending to a fire which she warned the princess must never be allowed to burn out. While lonely, the princess had been followed to the castle by her pet dog and cat who both kept her company for the years to come.

The princess grew and one day when she was out in the garden, sunlight strikes a fountain and creates a rainbow through which she hears the voice of a prince. The prince explains that he is being held prisoner and can only speak through rainbows. The two talk when they can and fall in love, however, Fairer-than-a-fairy spends so much time out in the garden that she allows the fire in her bedroom to fizzle out.

The cruel fairy orders the princess to retrieve a new fire from a monster that loves to eat young girls. However, on the way, Fairer-than-a-fairy meets a bird who tells her to pick up a shining pebble. When the princess reaches the dwelling of the monster, only the monster's wife is home and is impressed by the princess' beauty and manners and gives her the fire and another magic rock in exchange for the shining stone.

Upon returning to the castle, the princess and rainbow prince decide to place a crystal bowl on the bedroom windowsill so they can talk without worry of the fire going out again. Sadly, one day the prince tells her that his prison is to be changed and that he will no longer be able to talk to her through the rainbows. The next day would be their last chance to speak with one another. The following day was cloudy until the very end and in a hurry to speak to him, Fairer-than-a-fairy accidentally knocks over the crystal bowl, spilling the water, so she empties the bottles of the magic liquid so that she can speak to her prince.

Rather than face the wrath of the old fairy and desperate to save the rainbow prince from his new prison, the princess leaves the castle with her cat and dog, as well as the magic stone that the monster's wife had given her and a sprig of myrtle. She uses the stone to make a magic shelter to sleep in, but the old fairy catches up with her. The princess' dog bites the fairy which makes her fall and break her tooth which allows Fairer-than-a-fairy to escape, and the following night when the girl sleeps under a tree that grew from the myrtle and the fairy once again caught them, the cat scratched her eye out and the trio once again escaped.

For the next three nights, the princess meets three women who gift her with a nut, a golden pomegranate and a crystal bottle which are only to be opened when she needs them the most. Soon, she comes to a castle with no doors or windows which is suspended by silver chains. Knowing her prince must be inside, she opens the nut and inside is a tiny hall porter who climbs the chains and shows her a secret door. Inside she finds the rainbow prince in a deep, enchanted sleep.

Hoping he will recognize her voice, she loudly repeats her story to him to no avail. She then opens the pomegranate, out of which fly numerous violins which start to rouse him from his sleep. She then opens the crystal bottle which contain a siren who tells the princess' story and succeeds in waking the rainbow prince.

The walls of the castle opens and a court assembles, which includes the prince's mother and the three women. The queen reveals that the prince is now king while the women explain that Fairer-than-a-fairy is indeed a princess and the two are soon married.

How Fontaine Fits Into It

After their story, Airmé and Fay pretty much lived happily ever after and had twin daughters, Ciel and Fontaine. Fontaine is actually destiny-less, her older sister having the role as the next Fairer-than-a-Fairy.

Fontaine is the daughter of Fay Fairer and Airmé Arc-en-ciel. She loves both of her parents dearly, they are very close.

She is very close with her mother, whom she gained her gardening skills from. Whenever Fay went outside, Fontaine would insist on going with her. Fay taught her daughter facts about gardening and it did not take long for Fontaine to set up her own little plot with a few petunias and such. (This would grow to become her huge, gorgeous garden)

Fontaine is also close with her father Airmé, and she is delighted whenever he will draw pictures of the flowers from her garden.

She loves to make her parents laugh, she is the goofball of the family.

Her twin sister and closest friend is Ciel Fairer. She loves her identical twin with all her heart, and has nicknamed her "Ci." They always seem to know what the other is thinking about. Sometimes they enjoy this "superpower," other times not so much. Despite their huge differences in personalities, they are very, very close and love each other to pieces.

Fontaine's very best friend is her sister, not surprisingly. She loves to drag her to social events with her. (Although shy Ciel would rather not.) Fontaine does not have a hard time making friends, and gets along with pretty much everybody.

One of her other friends is Clementine-Anabella Pepper. She met her when Clem was hanging out with Ciel in the twins' dorm room. At first Clem was a little nervous about Fontaine, but she eventually warmed up to her.

Fontaine has a puppy with golden colored, curly fur named Leon. He will a very big dog someday. She loves him dearly. He will play the part of the dog in Fairer-than-a-Fairy.

Fontaine likes the idea of love, but no boy out there has captured her heart just yet.

Fontaine's basic outfit is still being worked out. Her main colors are red, orange, yellow, and pink.

"Oh Fontaine, you would look so beautiful in this!" "I would look like I should have been dead three hundred years ago if I wear that." ~ Ciel and Fontaine disagreeing on clothing styles while shopping.

The name Fontaine is french for "fountain," referring to the fountain in Fairer-than-a-Fairy.

Her birthday is April 20

Fontaine is the one who seems to have a case of hug-itis. :)

Fontaine, in her basic outfit

Ciel in her Getting Fairest designed and drawn by TaylorRocks. 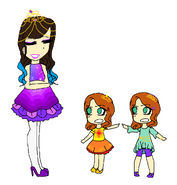 Fontaine with her mother and sister Ciel, playing the blame game (Fontaine definitely took the last cookie) by TaylorRocks

The twins! Fontaine (left) and Ciel. Lovely sketch by Filip of Mount Honora

Ciel's rockin' Date Night design by CowEverAfter. Looks like she's ready for an awesome night out with an awesome date!

Add a photo to this gallery
Retrieved from "https://everafterhighfandom.fandom.com/wiki/Fontaine_Fairer?oldid=294756"
Community content is available under CC-BY-SA unless otherwise noted.