Who, me? Oh no no no I don't have any earthly desires!

Oh, dear human, I can totes do anything you need of me! I can give you happiness! Or wifi signal!

Anyone who claims I have to feel sad in life is not going to heaven, let me tell you that for free.

Meteorology, of course. Geesh what sort of idiot doesn't care about cosmic events?

Margit, Virgil. How do you say it... #trulyblessed

Grethe Maylis Angelsen (she/her) is the next Guardian Angel from the Andersen tale The Last Pearl. Having finally qualified for the opportunity to go to the human world to guide others, there's no way in heaven, purgatory or hell she would pass it up. Therefore she identifies as a Royal.

With a personality that seems like a cross between a Stepford wife, a weather girl and a game show host, it's clear she's not from this world. Unfortunately it seems like the place she came from is the other side of a tv screen.

If happiness could take angel form and discover capitalism along the way, it would have manifested into Grethe. Grethe is always smiling, cheerful and energetic, almost threateningly so. She loves to 'help' others, and appears to be a very friendly person. However at heart, none of this is particularly true. Grethe is an extreme Stepford Smiler and everyone can tell. Her personality is completely obscured by the artificiality that seeps from every part of her facade.

Grethe takes great pride in the idea that she is projecting an ideal. Due to her Guardian Angel role, she considers her literal god-given purpose to be guiding and protecting humans, as well as give them something to strive for- in this case eternal happiness.

However all this outlook has given her is an inflated ego. Despite her permanent facade of humbleness, it's clear she often looks down on others. While she acts like she cares for others wellbeing, she's very patronising about it. In conversations it's clear she doesn't really listen, dominating them with her own thoughts on the matter. She's extremely self absorbed, and if anyone doesn't go along with what she's saying, she will ignore them.

Grethe doesn't often drop her persona, except when she's with friends or people she sees as equals. Beneath the facade, Grethe is quite predictably very immature. She's quite petulant, with a tendency to complain about all the things she couldn't show irritation towards at the time. Grethe is quite an irritable person in general. She's also very hot-headed and quick to argue.

Beneath it all, Grethe is terrified of the idea of sadness. Despite her story's moral, Grethe adamantly denies and tries to ignore any issues that could make her sad. She refuses to feel sadness at all costs. The sadder a situation is, the more stubbornly she tries to stay happy. Even if she has to deny its existence.

Grethe is also very averse to emotional help from others. Despite being generally needy in all other aspects of her life, she gets irritated when anyone tries to comfort her, should she ever be upset. She'd frankly rather solve things by herself should it ever come to it.

Grethe is somewhat money-hungry, although she's not really sure why. She just gets a kick from selling people things, and almost uses it as a way to prove to herself that happiness is controllable. She loves get rich-quick schemes, although at the same time she had nothing in particular she wants to buy. She doesn't really know what to do with the money so she tends to just... give it away.

Grethe's destined ward has yet to be born, so in the meantime she has been tasked with helping lost souls in general. She uses her powers to create an imitation of happiness, in a drinkable form, which she then sells to anyone who is sad.

Like other angels, she has the power of flight, with a large pair of kestrel type wings.

Rarely used, but Grethe has the power to bend reality somewhat, as if it is all a tv show. This is mostly seen in the fact that her human form appears greenscreened into reality, and sometimes can be spotted desyncing into a green silhouette when in your peripheral vision.

When Grethe gets angry she'll sometimes punch the background in frustration, as if it's also a flat greenscreened image.

Her chosen method of finding lost souls is projecting her own infomercials onto people's tvs late at night.

A child is born and all the fairies have come to him to gift him pearls of happiness, love and everything needed for a fulfilling life. The Guardian angel of the house comes to look at it but the child's Guardian Angel says that it is incomplete, but shall become complete in time. The House Spirit doesn't like this so they go out to complete it.

They come to a house where a family is mourning their mother's death. In the corner sits the Fairy of Sorrow, crying quietly. Her tears become pearls, pearls of sadness, and through it all the other pearls shine more beautifully.

How does Grethe come into it?

Grethe is a low level Purgatory angel from Fifth Terrace, who due to some decision from the Higher ups was given permission to go to Earth and fulfil the Last Pearl destiny.

Grethe's mentor figure is a higher ranked Fifth Terrace angel. She looks up to her and would constantly try to do her proud.

Grethe is Ace/Aro and finds the very idea of romance both laughable and also fundamentally terrible. She very occasionally lords it over people as proof of her being somehow 'purer' than them for not engaging in romance, but only occasionally. 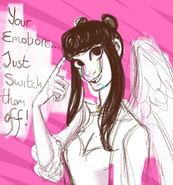 P sure this was vent art or smth idk its old

Add a photo to this gallery
Retrieved from "https://everafterhighfandom.fandom.com/wiki/Grethe_Angelsen?oldid=306104"
Community content is available under CC-BY-SA unless otherwise noted.