Tyvainea Thief - “What a lovely little gal! Who says thieves have no heart?”

“I just wanna be the best Queen Guinevere I can be, you know?”

“I’m a damsel, silly! Knights swoon to my rescue.”

“Waiting for my knight in shining armor, of course!”

“Unkindness! Where has the chivalry gone?”

Wooing 101 - "Courtship is such a Wonderland-iful thing, isn't it?"

Crownculus - "Why, it's far too complicated for such a simple farm girl like myself."

Tyvainea Thief - "I'd say we're equals. I wouldn't say I like her."

“Are you kidding? I’ve got tons of secret desires, but they’ve got nothing to do with the heart. My one goal in The End, though, is to be queen of Camelot, and I intend to stay, Arthur or no Arthur.”

“Magic might be Merlin’s thing, but I do know how to play a fairy convincing Princess Charming when it’s convenient.”

"Yeah, of course I look forward to the next Arthur and Lancelot, but I still get around these days. Between you and me, though, I prefer princesses, some more than others.”

“Anyone who tries to act wise with me. They don’t know what I’m capable of, and I could rid myself of them faster than you could say 'Excalibur'.”

Wooing 101 - "Teaches me everything I already know, but the ‘hextra credit’ is pleasurable to say the least.”

Princessology - "Guinevere is a queen; the princess title is already beneath me. Not to mention, my story is so much more complhex than True Love’s Kiss.”

She is the only daughter of Guinevere, former Queen of Camelot from British Arthurian Legend. She is a second year (or, Legacy Year) student at the time of the Rebel Movement and rooms with Tyvainea Thief.

Raised far away from Arthur’s kingdom and yet still destined to help rule, Gwen identifies as Royal, feigning support for all groups though there is only one she’s truly devoted to.

Known around campus as a humble, helpful, and hardworking young lady, Gwen is often considered to be the queen of the Arthurians (although as it stands she is currently a commoner). However, it’s also a title she’ll fight to keep using any means necessary, even if it means shutting people out and cutting others down...

In spite of being brought up a considerable distance away from the chivalrous and romantic ideals of Camelot, Gwen appears to have miraculously developed many of those revered traits on her own, and comes across as courageous, fair, and on occasion downright perfect. It seems as though her regal destiny holds little significance in the ways in which she treats others, regardless of class, role, or background, and above all she strives to be diligent but affectionate. Though she can often keep to herself, she still remains on hand to help any group or individual, and has successfully gained the utmost trust of those around her. She is even considered popular around school, simply on behalf of her good deeds. However, she is also seen as fairly mild, and aside from the admiration of her classmates, no one thinks much of the next Guinevere.

It’s a lie. All of it. Having meticulously developed this extremely complex and approachable facade over a long period of time, the majority of those Gwen comes across will never truly get to know who she really is. And they’re the lucky ones. Those clever enough to have deciphered Gwen will tell you (provided they’re still around) that she’s cunning, manipulative, and above all, ruthless. Goal-oriented and confident to many extremes, to say her actions are in response to insecurities of any kind is a gross misconception. Her motivations for lying are purely founded upon the idea that being trusted and liked will make people easier to manipulate, and if she needs to say, rid herself of certain obstacles, knowing they are unsuspecting will make her efforts that much easier to carry out. This mindset has brought her quite a way in life.

Due to her cunning, Gwen is extremely, almost frighteningly intelligent. She does make an attempt to get good grades in all her classes, but this is more out of trying to be a perfect future queen and to keep up a false appearance as opposed to, well, actually caring. Some classes do prove themselves to be exceptions when she’s actually engaged, however, and in those cases, she’ll likely breeze through the subjects without effort. Not only traditionally smart; she is also extremely clever and quick on her feet. With her wit, she could probably escape out of almost any bind, internal or external. She’s also rather competitive and feels an innate desire to outdo anyone with a similar status or destiny, and due to her high self-esteem, she’s never prepared to lose. Whenever she in fact does, she always takes it personally, which doesn't bode well for whoever beat her.

Obsessive is one vague way to describe Gwen’s various contingencies and acts of revenge, although her methods are incredibly diverse, varying greatly and mostly dependent on what action they are in response to. Whenever anyone has the nerve to threaten her, she will quite subtly but effectively cut them down so they will fail, and probably so discreetly they don't even know about it. If that does not pan out, or if anyone else catches on and gets involved, Gwen tends to remain calm and simply extends the boundaries of what she’s willing to do accordingly. And should an alternate situation arises, she will not hold back on feminine advantages, using her body to get what she wants. Still, these are all last resorts, and it’s a very rare outcome for one of her more simple plans to not work. In any case, she’d cite blackmail as a personal favorite method, and if it weren’t for her reputation, she’d actively and publicly encourage it.

Morality is a difficult thing to discern regarding Gwen. While she has done plenty of terrible things, and will likely continue to do so, she's not necessarily cruel or masochistic by any means. Perhaps the best way to define it is: if it benefits her self-interest, she will do it. If it doesn't, then why even bother? At least that's what she tells herself to maintain self-control. More selfish than anything, she's hardly the type of person to want to cause chaos for the sake of it. In fact, as a future queen, chaos is something she actively attempts to avoid and therefore often tries to keep the peace, playing the role of mediator. Due to many years of close-calls, she has gotten quite adept at damage-control. This isn’t to say Gwen is not interested in causing trouble and should doing so ever further her goals, one can expect her to be the mastermind of the ensuing chaos.

Gwen has a bad habit of viewing other people as tools, pawns, or anything less than human in order to achieve her goals. In fact, she seems to be disinterested in people and the value of human life as a whole. Obviously there are exceptions to this, and she doesn’t live to make others suffer (exceptions being in regards to her enemies/rivals), she just does what’s good for her and her alone. But when she does care for someone, though, she really cares for them, and absolutely no one may even consider harming them to get to her. This a possible reason as to why she doesn’t get terribly acquainted with anybody she might begin to care for. So one could say there is a protective quality to Gwen, but it’s mostly for her own self-preservation, and it rarely extends to other people. But then again, she is all about those exceptions.

Change is not something Gwen is good with. She's so used to manipulating others and having her way so often that when things don't work out for her, she's occasionally clueless about what to do next, and it’s in these moments that her cunning fails her. She'll for sure spend every minute trying to figure out how to fix things, and if it doesn't work out, she’ll be resigned for a bit and absolutely furious. She hides this anger, surely, but fears her temper is what will eventually out all her secrets, and she has so many it'd essentially ruin her. It hasn't happened yet, thank Grimm, but even the possibility of it is one of the few things Gwen genuinely fears.

Gwen herself isn’t exactly sure why she’s so obsessed with the Kingdom of Camelot, but it’s the one goal of being queen that has shaped her entire personality, life, and even relationships. She has never bought into the idea that one can earn a position of power through complete innocence, which is exactly why she lies, cheats, steals, or just does what she does, and perhaps if someone was able to convince her otherwise, she might be a completely different and better person.

During the Royal Student Council election period, Gwen ran for - and achieved - the office of Treasurer. Through this position, she has control over the funds of her class, and can actively allow or disallow the use of it as she deems fit. Interestingly, however, she actually wasn't the top choice for the position, but the winner of the popular vote was impeached shortly after embezzlements were discovered under his purview, though he's vehemently claimed his own innocence since.

yes blackmail is a full on hobby for gwen

Gwendolyne is a Caucasian girl with Jewish roots. She has light olive skin, deep blue eyes, and wavy honey blonde hair. She is rather petite in her build, being merely 4'10", with her height aiding her innocent, non-threatening image. However, conflating her with a gnome is widespread among those who first meet her.

Despite not being proper royalty quite yet, Gwen certainly dresses the part. She prefers bold, European royal colors of red, blue, gold, and white, and stylizes herself after Celtic royalty. Her motifs are fleurs-de lis, lions, snakes, and crowns.

How Gwen Comes Into It

After her rescue from the destined “execution”, the last Guinevere attempted to live in a convent by the outskirts of Camelot, the very same where she had been raised and her predecessors served as nuns. Unfortunately, labelled a sexual deviant and “seductress” even outside her story, and therefore deemed not adequately “virtuous” enough, she was sent to find an alternate path for herself.

Resigned to this new fate, she rode through the British Isles, though she vowed never to return to Arthur’s kingdom. During her travels, Guinevere explored the sights of many lands, though with the conscious objective of avoiding all locales associated with Arthurian legend. While staying in various villages using multiple false identities, she continued to satisfy her lusts, becoming the lover of many commoners, nobleman, and in some courts, the mistress to actual royals.

However, after one particular night of this spontaneous behavior, which would be her last, she realized she would be expectant of an heir to the legacy. She urged herself to travel as far away as she could manage, ending up somewhere along the Welsh coastline, outside the realms of any kingdoms. There, she met a farmer, whom she found romance with. After telling him the truth of her past and her legacy, they settled down, and Guinevere’s heir, a bastard daughter, was born.

They called her Gwendolyne Eve.

hes her personal assistant and shes his sworn protector

the lean and hungry type. vibrant commission by daisy

original sketch of gwen's default outfit by me : o 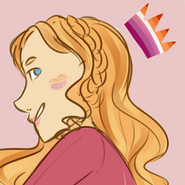 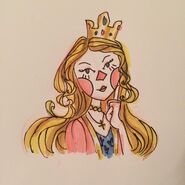 gwen's victory tour poster for the storybook of victors au!!

lovely sketches by zena inspired by hg au talks!!! i love these bc they show how short she rly is (sobs)
Add a photo to this gallery
Retrieved from "https://everafterhighfandom.fandom.com/wiki/Gwendolyne_%22Gwen%22_E._Vere?oldid=348536"
Community content is available under CC-BY-SA unless otherwise noted.