Ok, which ones are we going for? The Malawian tales or the SA ones?

Playing the Clarinet (or so I'm told)

When I play a wrong note in band and everyone stares at me.

French History (The Reign of Terror was particularly interesting.)

Physics (Mainly due to my insane teacher, Mr Makoni)

You know who you are.

ILoveRomione is an exceptionally insane 14 year-old with a love of RPing and Fanfiction. Her actual name is Naomi though she prefers being called Mona. Called Cassidy-Leah-Radford on Fanfiction she is usually known for her Duchess/Sparrow works (of which she has written plenty). She is a grammar nazi and has been known to constantly correct people while they're speaking (subsequently annoying the heck out of them).

She is addicted to Ever After High; Sparchess; the internet and fudge (don't forget coffee). She is probably the oddest person on the planet and has a menagerie of words that don't exist in her vocabulary. This aids her weirdness in making it impossible for people to understand her at all. One last thing - she loves to be a know-it-all and her friends often complain about her constant use of the word 'Actually.."

Daughter of Davy Jones and my main gal with whom I usually roleplay with.

Daughter of the prince from the Saltan's Tale (A russian fairytale).

A Daughter of Dorothy with a slight twist.

What Duchess Wanted : My ongoing story all about Duchess Swan and how she percieves the word of Ever After and beyond.

Love Lost : A One-shot set 6 years after Duchess graduates and the rebellion has taken a turn for the worst.

Feathers in Your Mouth : A short, fluffy Sparchess one-shot set before Thronecoming.

Distractions, Distractions : A One-shot in progress requested by a fan on FF (Yep, Dapple)

Sparchess - My OTP to end all OTPs..

Poison Apple - The way Raven looked at Apple in 'Apple's Birthday Bake-Off' and the "Little bit of love" comment started it.

Dexter/Cedar - Like it but it's not as cute as some.

Huntlynn - It's okay but the relationship gave no character developement whatsoever.

Briaven - I could ship this if I didn't ship Rapple.

Madter - Strange, but I've shipped it.

Hopper/Cupid - Pretty cute. If there was fanfiction for this I'd read it.

Never will I ever Ships

Darise - Sorry, but no. Daring is way too much of a jerk.

Dexven - The whole True Hearts Day mixup totally put me off this.

Dirror - Daring and his mirror. The ship that shall take the world by storm.

Duchess/Hunter -  I don't even know.

Character of the month

Okay, every month I'll choose my favourite character by another person and draw a bust of them. This month (June) I chose Kayla Eternity ; the sassy daughter of Gerda and Kay. So I upgraded my art trade with her owner - MeridithAgnesPoe and she got this bust of Kayla:

Ship of the month

Rapple. The fluffiness is overwhelmingly adorable. Just look at this! Can you not see the chemystry? I must write a fic for them!

Crystal Ella chibi by ILoveRomione as part of an art trade

Nazo Hime Chibi by ILoveRomione as part of an art trade. 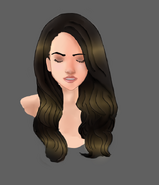 Sylvi Robber Chibi by ILoveRomione as part of an art trade

Confession - Maddie-ness
Add a photo to this gallery
Retrieved from "https://everafterhighfandom.fandom.com/wiki/ILoveRomione?oldid=116337"
Community content is available under CC-BY-SA unless otherwise noted.