Rebel. I not only support the rebel alignment but I want to try and make those ugly rats shut up about pirate stereotypes.

What I want is pretty obvious. Magic. So is there any way for someone like me to learn magic? Or am I just doomed?

I guess I don't really have a 'magic' touch as I don't possess such thing. I want to learn magic but it just doesn't work out for me, like others. Other than that, I'm pretty coolio at stealing stuff.

I like to boast about myself a lot but sometimes I go off on a tangent... Don't tell me to shut up, I, myself knows when to.

Mathematics. I can't be bothered to remember all the formulas.They won't come to use anyway.

I usually hang out with the villains and 'bad boys' of the school *wheeze*. But Drake, Alto and I are hanging a lot more nowadays.
Jamil Starkey is the son of Gentleman Starkey from the novel Peter Pan or the Boy Who Wouldn't Grow Up. It may be obvious to others that Jamil is not like the stereotypical pirate; he doesn’t have the accent, he isn’t wild or reckless but in fact the opposite. Yet, he does have the typical pirate intentions of stealing, committing illegal acts and acting like an absolute jerk. Jamil does crave treasure like usual pirates and would even steal to please his parents, but deep inside, he knows that it is worthless. He is also wrongly perceived as a ‘careless fool’ by many people as he is the villain in his destiny; they aren’t completely wrong though. Despite this negative description, Jamil is an open-minded character that has a logical and realistic outlook on life. Throughout his time in Ever After High, he has become a lot more wiser and has educated himself on legacy and the unfairness of it. Why are the nicest people destined to be the villain and why is everything already set in stone?

With such negative reputation, Jamil has gradually come to despise the role he plays in his story. If he was born differently, maybe people wouldn’t be so quick to judge him. He sides with the rebels, as a result.

It is no doubt that Jamil is a complete jerk. Because of the reputation he holds of being some ‘unapproachable villain’ that only wants treasure, he presents a foolish attitude to either show a lack of interest or to purposely displease people. He hates these ugly stereotypes, but nothing is going to change people's’ perspectives, so his sarcastic personality drives him to mock these interpretations by acting like a low-life and scaring people off, especially 'teacher’s pets' and 'goody-two-shoes'. His mind has decided to label these sorts of people as stuck up and privileged; and he knows deep inside that everything is not what is seems, but if everyone keeps judging him, why shouldn’t he be able to judge them? This doesn’t mean that he will not willingly socialise with others though. For instance, when he is required to use people as stepping stones to reach his goals, he will not hesitate to do so. Jamil is sly and tactical enough to carry this out. He is also quite the smooth-talker and has a way of words that can manipulate others into falling into his traps. It’s really the only way for him as he is incapable of magic that could potentially make things easier for him.

Ignoring the bad outcomes, Jamil is rather smart and witty which comes from his tendency to be logical more than sensitive. His intelligence started growing when he was quite young, being the independent boy and also occasionally missing his junior school days to study at home in peace. The hard work seemed to have paid off now. His cunning ability to charm people with his charisma and intelligence for his own goals hasn't been a problem. But his constant factual outbursts - that really do annoy people - has! This behaviour has also left people perceiving him as a smartass. But being so smart gives you endless opportunities to contemplate life and society. Jamil despises the concept of ‘legacy’ and ‘destiny’ as it does not give people a chance to live freely, which is definitely a reason to why he switched alliances and joined the rebels halfway through his high school life.

So if Jamil is such a dislikable character, how does he have friends? Just because he chooses to scare the good kids off doesn’t mean that he’s going to act like an idiot to everyone. Villains and people who interest him are exceptions. Of course, a guy needs at least a few friends to maybe keep close. He also doesn’t mind flirting with random girls when he’s bored. Jamil is usually the first to start a conversation due to himself being a charismatic guy, and has landed on good terms with many other ‘baddies’ of the school, in whom he usually hangs around with on breaks. A few of his friends describe him as comical, cracking up a few puns here and there to either make them laugh or groan in absolute cringe. His humour is mostly on the sarcastic and ironic side, as he likes to make fun of stereotypes with much sarcasm, mostly because of his cynical self. Jamil’s energy around his friends can show that he is not always a rude, careless pirate all the time. He can be extremely sensitive about his close friends and betrayal could horribly ruin a relationship. However, Jamil would still have hope and will likely hand you another chance, but those chances are limited. Those special chances are only given to close friends. Other than that, re-building a relationship you once had would take very long period of time. He's actually quite sympathetic and it's quite surprising since you wouldn't expect him to be like that, mainly because of the attitude he shows off. But in summary, Jamil is willing to try and help out in any situation that manages to trigger his sympathetic side.

Unfortunately, Jamil is not always as stable as you would expect. His moods seem to bounce from being an easy-going character to a guy who only knows how to be grumpy. Another one of Jamil's annoying traits is being a moody wreck, especially towards people he dislikes very much. Only his closest friends could maybe lighten him back to his charismatic side. Because of how grumpy he can be, Jamil can also switch to an unhumorous side where he wouldn't react to jokes as much as he would, or he'd just tell people to shut the hex up and leave him alone. Pretty rude.

Influenced by his parents, Jamil has a craving for treasure and wealth. He has a history of committing frequent crimes such as shoplifting and such to please them. Jamil has realised that wealth does not equate to happiness for him, and yet still decides to continue these acts anyway.

Although Jamil has a logical outlook on life, it doesn’t mean that he can’t be creative once and a while. Sometimes, he is doing experiments on science or researching unusual things. He is most fascinated when trying to solve mysteries and crack cases and it sometimes keeps him active when he's bored but that fascination won't be with him all the time. One of the great mysteries he tries to solve himself is his incapability of practising magic. Everyone else seems to be capable but him and it really does bother him. But sometimes, Jamil just doesn't want to solve mysteries unless you could motivate him. Another thing he prefers doing is singing. He doesn't look possible for it, but Jamil can sing indie songs, jump around and still stay stable.

He also has a love for fishing. People may suggest that it is only peaceful and boring, but Jamil says that awaiting for the next fish to grab the bait proves that it is thrilling. Jamil frequently heads to the river in the nearby forest and starts fishing. If he isn't in class, it won't take that much time to guess that he's away fishing. Most of his detentions revolve around ditching classes just to do what he enjoys. Napping seems to be something he mostly does, the usual sleep he gets are quite relaxing and full of amazing dreams. Dreams are a reason why Jamil loves sleeping, you get to experience things while you're lying comfy in bed.

Jamil has been independent for his juvenile years. He has been looking after his own room, cooking for himself and keeping hygiene. Which means he has composed a love for cooking and keeping things orderly and in shipshape.

As a pirate, you'd expect him to look ferocious, stouthearted but Jamil doesn't look similar to any of those. He looks like any modern guy who looks like he's cosplaying as an pirate wearing old habiliments. Jamil's skin colour is a rather moderate brown and he stands at the height of 5' 8".

He has a diamond shaped face which is very well-structured his nose is also straight having narrow nostrils and a pointed tip. Jamil's eyes are dark brown which are large but also down-turned, he shows a tired expression that can totally kill his extroverted side. His eyebrows are tenebrous and bushy that also give his face an irritated look. Jamil's smile slightly changes his face to more of a jubilant look, but he's not always smiling. Jamil's hair is short and dark brown, it isn't that long but isn't short either. He wears a bandanna as well, just to look sort of like a pirate.

Main article: Peter Pan; or, the Boy Who Wouldn't Grow Up

How does Jamil fit into it?

Starkey - After his father's departure, his relationship with him has been detached like it's supposed to be. Starkey promised that he'd be home one day and Jamil still waits for him. They're quite a funny pair when they're together, also very respectful to each other as they are family.

Mother - Jamil's mother is not very known as a famous pirate, but she is very stealthy, sly (and also charismatic) which leads to her being a skilled thief, stealing money and jewels and trying to give her family a lovely life-style. Jamil describes her as a 'cool mother', learning how to steal things by looking up to her skills and style. They have a smooth relationship, however rarely speaking because of technology nowadays, she's always on her mirrorphone chatting to her friends (and not spending time with her son -.-) She constantly tells Jamil that his dad is coming home, do not worry; but I don't think she understands Jamil's intelligence. Unfortunately, her mother has retired from stealing and now works as a costume shop assistant, Jamil can't help but to be a little disappointed .

Alto Lute - TBA annoying roommate who he takes for granted :(

Yunus - Jamil obviously has a pet parrot whom he named Yunus. This parrot was taken in and looked after ever since he was a hatchling. Yunus is likely to annoy Jamil, such as ignoring him when Jamil speaks just for the sake of annoying him. Jamil has sure had a hard time trying to raise him, especially since the parrot just doesn't stop squawking.

Jamil is definitely a romantic guy and will straight up go and flirt with someone he finds attractive; but he has never truly been in love before, he'll decide to hide his true feelings from anyone else.

TBAA he keeps it clean af

An old favourite lol. The lyrics may seem confusing at first but listening to the song might make them easier to understand. The vibes I get from the song really suits Jamil.

i do have a pinterest board but comin soon i guess

old sketch of his outfit 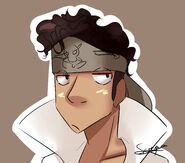 headshot
Add a photo to this gallery
Retrieved from "https://everafterhighfandom.fandom.com/wiki/Jamil_Starkey?oldid=297134"
Community content is available under CC-BY-SA unless otherwise noted.