Start a Wiki
This Page, Jobal-Jennifer Moria is a work in progress, meaning not all sections are filled out

The Ghost of Christmas Yet to Come

i can time travel but like. everyone in my fam can so its not vry impressive.

seacilia mcmerhon is the leia to my han and the jennifer to my marty.

when i see the future and it sucks

im too cool for school BD

auds and pan are probably the coolest people out there. besides me, of course.

milk and christmas cookies are a classic in my house

Known for their cool and cryptic vibe, Jobal-Jennifer sides as a Neutral in destiny conflict. JJ couldn't really care less about their own destiny. Plus, they find the Rebellion itself an incredibly pointless endeavor. Still, they openly support both sides of the conflict and try to understand both of them as best they can- they just simply don't want to be involved.

Jobal-Jennifer Moria was born on October 12, 1997 in the Ghost Realm to unknown parents. Whatever happened to their birth parents is unknown, but JJ ended up being adopted by Casper Tyme and Simon Moria. They were adopted into a tight-knit family of Time Ghosts, consisting of her uncles, the Ghosts of Christmas Past and Present, and their children Audaline Syne and Pandora Present.

JJ's childhood is a blur of Christmas, time travel, and old movies. I dunno what you want.

Jobal-Jennifer is pretty much known by the Student Body of Ever After High as being cool, calm, and collected. They enjoy being incredibly cryptic and having a mysterious vibe to them- it's all in the day's work for a time-traveling ghost. Saying little during classes (sometimes not showing up at all) and leaving their personality up to their classmate's imagination, the general consensus is that JJ is very well put together and just "too cool for school, man".

JJ wears an aura of confidence as a protective measure, so to speak. Don't let anyone know you have terrible anxiety and it will all be fine. They keep their head high, don't address the rumors, and keep a smile. Those who talk to JJ find them cocky and very sure of their abilities. While JJ isn't really self-absorbed, they do have a lot of self-love, bordering on ​​​self-centered (though nowhere near the self-centeredness Daring Charming appears to have, let me tell you).

They also appear very careless and carefree. Skipping class without a care in the world, doing impulsive things for the hex of it, saying things they might regret, all with a smirk and shrug. They're living life to the fullest, as they put it, and spending their teenage years the way "they're meant to be spent". They don't seem to recognize the consequences of their actions, and when they are asked they do the things they do, they just give a smile and drop a funny one-liner.

You see, the problem is, the future vision is a blessing and a curse, all rolled into one. There is a huge price to pay for it, and that is terrible anxiety that comes along with it. It's not all fun and games, it's hard living with the knowledge of how the future is going to play out, with no way to change it. Believe me, JJ has tried. It's very stressful to know when and how bad things are going to happen, it's almost crippling. Some learn to cope with this, like JJ's dad, but as a young time ghost, JJ still doesn't have a grasp on it.

Also thanks to the future vision, JJ is incredibly nihilistic. They believe the future is set in stone, and our actions don't affect it at all. Of course, yes, if you leave the oven on when you leave your house, your future is that your house is going to burn down, but still, as much as JJ wants to change the future, they know they can't.

It's not all a lie though, I guess. JJ, actually, very impulsive, but not in a cool fun way. Yeah, they play it off as "haha let's go get ice cream at midnight, so quirky and fun!", but a lot of times their impulsivity gets the best of them. They can be very reckless, and rarely think things threw, putting themselves and people they care about in often dangerous and irreversible situations. It's not all fun in games, their impulsivity has ruined relationships, and permanently tainted Jobal-Jennifer's record and reputation. But it's fine, just act like you don't care and just play it off because that's how people think you are.

Jobal-Jennifer has a huge tendency to run away from their problems. They hate to face the truth of any situation and will pretend everything is fine until eventually, it does become fine. TBC

On a more positive note, JJ is very passionate about the things they enjoy. When they like something, they like it a lot. A prime example of this is their interest in Story Wars- they know everything and everything there is to know, and they could talk for hours about it to anyone who would listen. Is it also a coping mechanism- getting emotionally invested in certain types of media and interest to distract themselves from the ever-growing stress of knowing the outcome to every situation ever? Possibly.

Of course, underneath the anxiety and mystery, JJ is still a rather joyous ghost. They love making jokes and seeing people laugh and they are the Monarch of puns and dad jokes (thanks to Audeline and their dad, Simon). Jobal-Jennifer loves being social and as much as the general student body tries to avoid them, JJ is very much an extrovert and adores the friends they have. The whole act is very tiring, but its something JJ is willing to put on for the sake of others around them.

JJ has long brown hair they like to keep in up- mainly in Princess Leia-inspired syles. Their personal favorite is Leia on Cloud City. They have brown skin and light brown eyes- however, they typically hide their eyes under their glasses (think 2015 Doc Brown),

Ever since JJ was a wee ghost, their dads fostered a love for science fiction in them. Casper was a huge fan of Story Trek, while Simon was more partial to Story Wars and Book to the Future. Nonetheless, the two shared their love for these franchises with their child. JJ has seen all of these respected movies and shows numerous times and loves them to death. It's not uncommon for JJ to reference or quote them at random- often times rather obscure mentions that make no sense to anyone else. But hey, that's JJ for you: a ghost making a bunch of references no one understands.

How does JJ come into it?

After the story was completed, the current Ghost of Christmas Yet to Come settled down with a destiny-less ghost named Simon Moria. The two ended up adopting JJ together.

Jobal-Jennifer sides as a Neutral, and most people pass it off as just "oh yes, carefree JJ doesn't care about Destiny", and that's pretty much was JJ tells people. Which is partially true, but there's way more than that. TBC

JJ likes dressing in pseudo-futuristic apparel, think a Star Trek kind of vibe. There are a lot of grays, blacks, and purples, going for a sleek future vibe.

School has never come easier of JJ, there has just always been something off. They tried their best Freedom Year to get good grades, but it seemed like a fruitless endeavor to them. So, they just sorta gave up. They stopped doing their work, started skipping class, and just let their grades slip and slip. JJ is calculated about it though, they make sure none or at least most of their grades are failing, but their report card is littered with Ds and Cs and maybe if they're lucky, just one B. Casper and Simon have yet to question why he's never seen JJ's report card.

Jobal-Jennifer isn't too involved in activities around the school, at least officially. Being that they are dating one of the founding members, JJ attends a lot of the Star Gazing Club's meetings and fundraising events.

The Weekend by Modern Baseball 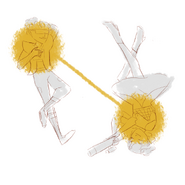 Starfish ship art by Zena!
Add a photo to this gallery
Retrieved from "https://everafterhighfandom.fandom.com/wiki/Jobal-Jennifer_Moria?oldid=344687"
Community content is available under CC-BY-SA unless otherwise noted.