The Cat and Venus

Katerini Ailuros (also going by the nickname Kat) [they/them] is a 2018-introduced and all-around original character created and developed by amatoresx. They are the successor of the Cat from The Cat and Venus, a Greek fable authored by Aesop. They are currently attending their Yearbook Year (otherwise known as their third year) at Ever After High in the Kingdom of Ever After and rooms with Feliks Nikolaev.

Before Attending Ever After High

Attending Ever After High

this is garbags oops

how does cat come into it? 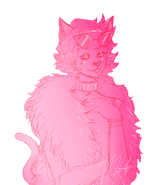 Oh Mew Know
Add a photo to this gallery
Retrieved from "https://everafterhighfandom.fandom.com/wiki/Katerini_Ailuros?oldid=334798"
Community content is available under CC-BY-SA unless otherwise noted.