"To live how I choose, free to make my own decisions without having to worry about what other people will think."

"I'm not sure... I've always had quite an affinity for Dragons, though!"

"I'm single- I don't need a Prince, thank you very much."

"I can be very stubborn, and sometimes have trouble looking past my own resolutions to see someone else's perspective. I can unintentionally disregard someone else's feelings in favor of my own. I always feel hextremely bad afterwards..."

Kora is the stubborn yet kind-hearted daughter of the princess from The Four Skillful Brothers. This Rebel royalty isn't too keen on the idea of being kidnapped by a dragon and then fought over like a piece of meat by her saviors.

Kora is overall hextremely kind, and cares deeply about those close to her. She's outgoing and social, but has few true friends despite her upbeat and friendly attitude. Kora can be stubborn, and often gets situational tunnel vision, which has led to some less than spelltacular moments.

Kora has vibrant green eyes and shoulder length blonde hair, which contains both dark and light green streaks. She has pale skin, and wears relatively simple makeup but with a bold, dark lip.

A father sent his four sons away from home to learn trades. Each brother met a different man and learned the skills of the trade they had to offer- The oldest son became a thief, the next an astronomer, the third a hunter, and the youngest a tailor.

When they returned home, their father decided to test their new skills. He asked second son how many eggs were in a bird nest, which was situated high in a tree. He used his telescope to see, and told his father there were five. The first son then climbed the tree and stole the eggs, the birds none the wiser. The third son then shot all five eggs with one shot, not missing a single one. Finally, the fourth son stitched the eggs back together and put the chicks back inside, allowing the eldest son to return them, once again without the birds' knowledge. The only evidence of their test was that when the birds hatched, they each had a red thread around their necks.

Soon after, the King's daughter was kidnapped by a dragon, and the brothers set out to rescue her. Each used their skills to aid in their quest, rescuing the princess and slaying the dragon. The Brothers bickered over who should get the princess, as the King could not decide, since each had been equally important in the rescue of his daughter. To stop their fighting, the King gave them each a quarter of the kingdom.

How does Kora come into it?

Kora is the princess who is kidnapped by the dragon. After being rescued, she is fought over by the brothers, yet ends up marrying none of them as the King gives them each a share of the kingdom instead. When Kora was a young girl, she had adored her story. As she grew older, however, she became less and less excited about the prospect of living through it, especially after she developed her fascination and love of dragons- the very thought of one being harmed for her sake makes her feel sick!

"The Third Brother" from The Four Skillful Brothers

After the argument of reward had been settled in his story, he and the princess got married and had Kora. Kora adores her father dearly, and would do almost anything to make him happy. When Kora told him of her refusal to follow her destiny, he disagreed wholeheartedly, causing a rift in their familial bond. She still loves him with all her heart, but the two disagree more often than not.

"The Princess" from The Four Skillful Brothers

Kora never knew her mother, as she passed when Kora was very young.

Ludovica Draconica - Kora's best friend forever after. They met when they became roommates, and bonded over shared interests (the interest being mostly Kora's, specifically her fascination with dragons. When you end up with a dragon for a roomie, how could you NOT ask questions?).

Lorraine Enchanté - Kora cares dearly for Lorraine, finding her very sweet. She enjoys talking with the other, and tries to urge her to step out of her comfort zone every now and then.

Kora's pet is a Bearded Dragon names Arthur. Kora practically spoils the lizard, doting on him as if he were a baby. Arthur basks in the attention, and can be very protective of Kora.

Kora is single, having turned down every Prince who has asked her out. She is, however, crushing hard on a certain Dragon she's friends with- but she'll never admit it.

Kora doesn't have any enemies, per-say, but she strongly dislike anyone who tries to force her or others to do things they don't want, to live a life they didn't choose. 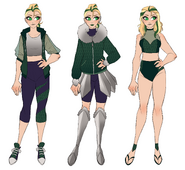 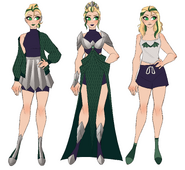 All art by @gnashgab_genet on Instagram unless otherwise stated. 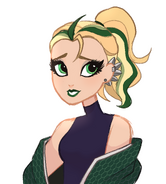 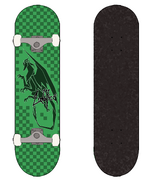 Add a photo to this gallery
cre
Retrieved from "https://everafterhighfandom.fandom.com/wiki/Kora_Drak?oldid=344091"
Community content is available under CC-BY-SA unless otherwise noted.