Beauty and the Beast

"I don't want to be turned into a beast, then into a human. I want to stay who I am now."

"My beastly nature has come with quite a few perks, such as wicked strength and great senses."

"Jolene Beauty and I have a mutual thing. It's just not out in the open, yet."

"I'm rather...clunky, for lack of a better term. It's difficult to be be precise with these giant, stubby fingers."

"Environmental Magic. It comes naturally to me."

Leona Beast is the daughter of the vain prince(or Beast) from Beauty and the Beast. She is a Roybel, because while she likes how she is now and doesn't want to become human at the end of her story, she's afraid it may be the only way she can end up with her soulmate.

Leona stands at 5'9" with a somewhat curved build and tan skin. She has curly, dirty blonde hair that is left loose to wildy fall to her chest. Her eyes are a vibrant shade of brown that can't really be considered light or dark. Her black nose is similar to that of a dog with a small pair of horns at its sides. Her arms and legs appear to be covered in a short layer of light brown hair. Her hands are larger than average with large, stubby fingers edged with claws. She has a light brown tail similar to a dog's. Her ears are large and furry with pointed ends.

Despite her appearance and reputation as the next Beast, Leona is actually very gentle and usually keeps her cool. She's very timid and usually tries to get from point A to point B with as little attention paid to her as possible. Unfortunately, this is hardly plausible due to the fact that she is rather physically awkward, with physical quirks that make her clumsy and prominent. Though she's level-headed and usually cool as a cucumber, she can be boiled down to her animal instincts- not in a situation that provokes rage, but one that provokes fear. Gladly, Leona doesn't fear much of anything and tends to have her emotions under control. She's much more likely to turn to tears than to rage, though her immense strength may also go beyond her notice when she is emotionally unstable, making her dangerous nonetheless in such a state. She's also a hopeless romantic. Leona tries to be kind and caring, though she's also rather oblivious to many things, particularly the feelings of others and body language. While Leona is of royal blood and tries her best to act like it, she's not very used to it and lapses in her manners from time to time. Due to her naive and oblivious nature, she is easy to manipulate if one is clever enough.

Fairtytale: Beauty and the Beast

The tale can be found here.

How Does Leona Fit Into It?

Years after the Beauty and her Prince were wed and made King and Queen of their land, they longed for a child who would carry on one of their legacies. Before they could create such a child, however, it was found that the Beauty was unable to bear a child. As the Beauty bitterly mourned such a realization, she insisted her king find a maiden who was willing to bear the next Beast. The next Beauty, it was determined, would be the second-born child of Beauty's eldest wicked sister. The King did find such a maiden, but the maiden had a secret that was not revealed until shortly before the child's birth: the maiden was born a beast and cursed into becoming a human, the opposite of the King's former curse.

Shocked and angered that he had been tricked by the maiden, he cast her away. Though the mother soon found love and was able to return to her beastly form, she then gave birth to a girl by the name of Leona. This child had recieved each of her parents' "true" genetics- human from her father, and beast from her mother. Leona was raised among other beasts but always knew that she was different. She'd always had trouble making friends with the other beast children who thought that she was weird. At the age of thirteen, Leona ran from her home, only to find herself face-to-face with the fairy who had watched over the King while he had been under the curse. She led the child to her father, who refused to take the girl in and claimed not to recognize her until Milton Grimm himself informed the King otherwise and demanded he care for and mentor her in order to help her fulfill her destiny. The King then took Leona in and tried as well as he could to make her into a "proper, human-like princess" in preparation for her role.

The King, as it turned out, had already changed his surname to something more befitting of royalty and sought out another woman to marry him, producing a son by the name of Bastion Kingsley. Bastion had been thought as the heir to the legacy before Leona stepped into the picture, leaving the prince a bit confused.

Leona is the child of the King(formerly the Beast) and a beastly maiden once disguised as a human woman. Leona spent most of her life in her mother's care, though she was later taken into her father's custody once discovered to be the next Beast. She has a younger half-brother on her father's side by the name of Bastion Kingsley. Though the two are polite and kind to each other, they are not very close and still act almost as strangers despite having known each other for around three years.

Bessavaria Oz is one of Leona's BFFAs. The two have bonded over a few shared interests and habits, as well as the ideal that they'd both like to fulfill their destinies without having to change what they themselves really are.

Leona Beast is also one of few people who has earned a friendly rank in the eyes of Rosie Epiphany, mostly by holding the status of her roommate.

Jolene Beauty is Leona's one-and-only. Despite the two being destined soulmates anyway, the two aren't very open about their relationship.

Leona does not have a pet, as the concept seems odd to her.

Leona dons a brown coat with gray-brown fur trim over a light blue shirt. She also dons a light blue skirt and dark blue belt with a golden buckle which, when viewed in full, resembles a clawed pawprint. Also over her skirt is a cloth chain of sorts, detailed with small depictions of roses. Beneath her skirt is a gray pair of pants rolled up at the ends that apear to be oddly bunched near the bottoms by a pair of blue ribbons. Her heels are brown with white plates at the toes resembling hooves while the heels appear as large claws. 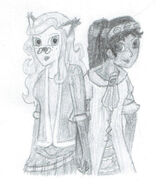 JoLee Being a Thing
Add a photo to this gallery
Retrieved from "https://everafterhighfandom.fandom.com/wiki/Leona_Beast?oldid=274157"
Community content is available under CC-BY-SA unless otherwise noted.