Lilly Kitten is a comic artist, cartoonist and general eccentric in the way only cartoonists and comic writers can be.

Older than most people think, but a true child of Neverland who will not grow up.

I have the WORST consistancy ever because I get distracted and sidetracked easily.

Maths. I hated it, failed it and generally still abhor it.

Lilly is a terrible judge of her own looks, as she has intense self conciousness issues, but a consensus of friends and workmates when asked to help her add a description of herself for this say she looks like something between Xena and Sasha Kaidanovsky (Pacific Rim) Picture what you will from that.

She has triple ear piercings, a Munroe lip pircing and brown hair that changes from black to wine red depending on how much she feels like dying it. The only reason it's not purple is because her workplace has a ban on "strange" coloured hair.

She dresses in three different manners- either like a cartoon villainess, bubblegum gothic or like she's going to beat the crap out of you.

Her hum drum workplace is a railway station in Australia. She operates a huge panel of switches that control where the train goes. It's a very high stress job and can have hours starting at 2am or finishing at 3am, often working around failures, late running, high pressure and screaming customers at the window- which she doesn't work at, but unfortunately is visible from. However, the perks are many, including lavish pay and an excellent, highly nerdy work team.

She's also an artist, and would be full time if it wasn't so varible and unpredictable when it comes to profit. The arts (Art, dance, music, writing, etc) is the only industry that is universally colosally underpaid, because we love our practice that much we will take what we can, so she's a "blue sky" artist, which means she gets broad artist project outlines and cobbles together a heap of ideas so the client can single it down to one. Occasionally she does the final project, occasionally someone else does.

She draws pin ups and fanart for selling at cons and various places online and is working on a comic now with investors and a co writer.

Her style is a very unique combination of many influences with a strong influence of classic pin up toon aritsts like Dean Yeagle, Disney, modern western comics and the more elaborate manga and a highly bright colour pallatte.

Lilly does boxing and light martial arts as enjoyable exercise, with the help and encouragement of her closest friend, who's two levels above blackbelt and who's father owns the dojo she trains at. She used to do acrobalance in the circus, but her balance partner moved to a different state and it just wasn't the same, so she quit. She also has classical singing training and teaching level clarinet.

She's a long time gamer, playing Nintendo is EVERY single version of it's many platforms, from the original 8 bit grey box with the very first Super Mario and Zelda games, right though the Super Nintendo, the Nintendo 64, the Cube, the Wii and now the Wii U. She was always good at games, to the point where her brother would invite his friends to challange her to "boy" games like Mortal Kombat, just to watch them get trounced by a years younger than them girl. Girl gamers were rare when she was playing, unlike nowadays, so the bias was a lot stronger. She now struggles to find games that challange her.

Lilly has many collections. First and formost is her collection of ball jointed dolls. She has many, most of them creepy as hell, but her favourites are Pipos Cheshires and Cerberus Project Shiwoo's- both of these come in many colours, the Cheshires in two differnet forms and many fullsets, the Shiwoos in many sizes from 9cm right up to 70cm. She has probably teh most complete collection of Shiwoos in the hobby, as she has two of the three highly limited dolls with only 4 and 5 of the dolls in existance.

She also collects Monster High dolls, Animation Cels, My Little Pony things and Kokeshi's, but in all of these cases, she simply gets what she likes rathe rthan tries to complete a set. They all live in her studio.

Her favourite Ever After High characters haven't been fully formed, as the series is in its infancy at the moment. However, having often dressed as the Queen of Hearts at parties, Lizzy is likely to be one, and having been dubbed "the Cheshire Cat" at her workplace, Kitty is likely to be another. More about this when the series gets further on.

Lilly has avoided creating Fandom OC's since the advent of the Internet. However, in recent years she has created a few, scant fan OC's and support characters.

Jane  was created on the prompt of a friend who's a Peter Pan fanatic. She was a bit of a lark, but ended up a great deal morepopular than Lilly expected, gaining a startling following, including a great many questions aimed at Jane and requests for specific drawings of Jane. She's presently in the process of getting her own Q&A Blog due to demand

Esmee is Jane's narrator. Jane oftent hinks herself above the others around her, like her father, and Lilly found she needed someone to explain and narrate a lot of Jane's actions and decisions. Smee filled a similar role for Hook in the play version of Peter Pan, so it was natural an version of Smee was perfect. Jane's treatment of Esmee is also a good measure of her character.

Lilly draws and minds a few of the characters for others in the fandom that haven't the drawing skill or inclinating to get them down on paper.

Peta Pan and Tank are the Jane Hook and Esmee counterparts, created by her closest friend and the Peter Pan enthusiast who started Jane off in the first place. Pictures pending.

Joan Silver is Jane's friend and roomate, based off Treasure island's Long John Silver. Not much has been done with this character at the moment, but pictures are pending.

Lilly is all over the internet on many sites. You can find her:

Lilly's Art on this Wiki 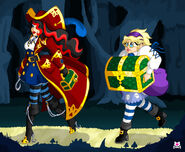 Jane Hook and Esmee, her sole and only EAH characters.

Jane's Legacy Day dress, Designed for a competition on DA

Jane interacting with the the canon cast. Maddie gets the first go. Jane hates clocks....

Jane's beach shot, playing around with her now she's established.
Add a photo to this gallery
==
Retrieved from "https://everafterhighfandom.fandom.com/wiki/Lilly_Kitten?oldid=26632"
Community content is available under CC-BY-SA unless otherwise noted.