“I wanna see all injustices in my realm dealt with. Like, there's no place for any of this, and if I'm to reign, I will see to it that no one suffers under my rule."

“Magic-magic isn’t really in my tale, but I do know where all the sales can be found! That’s, like, totally a superpower.”

“I feel like a lot of people just try to use me. I know I’ve got shortcoming, but like, don’t underestimate me.”

Castle Design - “Believe it or not, I’m actually fairy good with numbers, and combine that with my natural love for Baroque beauty, and it’s the easiest A, like, ever after!”

Kingdom Mis-Management - “As if I could even! It’s pretty much everything my kingdom hexpects me to do with power anyway, and it’s, like, not very fairest if you ask me.”

“They’re not the most extravagant of deserts, but I could never live without my vanilla wafers! Seriously, they’re like, miniature cakes! How adorable!”

Her Royal Highness Princess Loucette Marie Jeanne Antoinette de Bourbon [she/her, he/him] of the Kingdom of Pailleterie, universally referred to as Lulu or Lu, is a 2017-introduced and all-around character.

She is the eldest child and daughter of King Louis from the novel The Three Musketeers, written by French author Alexandre Dumas. She is a Yearbook Year student at the time of the Rebel Movement.

Destined to take on her father's role as the sovereign of Fairis and beyond, Lulu is contented being a ruler but conflicted regarding her own role within her kingdom’s story and politics. Although her airheadedness and occasionally spoiled demeanor might imply otherwise, she doesn’t want to be written off as a meek queen, and thus identifies with the Rebel label. She may be the one to enjoy all the luxuries of a royal title, but she also wants to do away with unnecessary protocol and genuinely help her people post-destiny, despite her weaknesses.

To most, Lulu appears no more noteworthy than every other princess in attendance at Ever After High. Kind, polite, and utterly innocent, most seem to view as little more than a child. Ditzy with a whole lot of airheadedness', she has a tendency to forget minor things, and, coupled with a willingness to ignore major traditions, her behavior severely troubles the good people of Fairis. A friendly, inviting, and unceremonious person, she sees no need in keeping with archaic protocol, and especially at school will allow her classmates to address her with whatever titles or lack thereof they desire (although only her best friends forever after get to call her Lu anytime and anyplace).

Laid-back and easygoing to a fault, Lulu naively believes that nearly any conflict will, including those of destiny, simply blow over in due time, and chooses to not concern herself with the majority of them. However, she cares quite a bit about the deeply-rooted issues of her home kingdom, and intends to address every one of them as Queen; even if the authority figures in her life do not want her to. A just yet sensitive person, she is a courageous ruler in theory, but isn’t too physically imposing and sometimes not so mentally-mature enough to be able to handle such squabbles, and perhaps relies too often on her musketeer friends to defend her honor, as well as bring her back to reality when she inevitably ends up distracted, which is unfortunately more often than not.

Although a casual person in attitude, Lulu certainly is not in taste and living a pampered royal lifestyle has accustomed her to desire only the finest of possessions. Entitled and even insensitive to a degree, she believes money can indeed buy happiness, but only if you have the right friends to shop with, and Lulu knows to share the wealth whenever and wherever she can. Extremely social, she finds much contentment in simply hanging around any group of friends who are willing to put up with her contradictory behaviors and occasionally eccentric mannerisms, and sometimes Lulu could even be described as clingy; another childlike trait of hers. Still, she likes to try new things and is always willing to invite anyone lonely as her companion.

Despite how certain others view her, Lulu can be and is headstrong and abhors being stereotyped as just another princess in a school of royals and especially doesn’t take too kindly to being objectified and used for her wealth, and has no qualms letting this be known to any of her manipulators. Of course, her usual airheaded nature means she hardly realizes when people are being fake to her, being somewhat oblivious to the fact. However, she’s more than happy with herself on a personal level and has reasonably high-esteem, despite occasional lapses, and always knows she can rely on those closest to her, and she always, always, always return the favor to those who need it, even if it means overcoming her general laziness.

How Lulu Fits Into It

After the last generation's retelling of the romances, Lulu was born as the eldest child to the reigning King Louis and Queen Anne (the first generation began with Louis XIII, but what generation Lulu is a part of exactly is unknown), and thus was destined to take her father's role as the monarch of Pailleterie.

It is implied that Lulu is the first female in her family's line succession, but she has never been subjected to any bias for it. In fact, her parents are quite proud of her, especially her father, to whom she is very fond of in return.

Unlike how the story portrays King Louis’ legacy, Lulu’s dad isn’t selfish or petty, so much as absent-minded and clumsy. He tends to be treated by his own advisors as expendable; a figurehead plaything of the Fairisian court rather than King in his own right. Despite their similarities, Lulu is actually competent enough to notice this cycle, and she feels a mix of anger and sadness at how her father is regarded. She certainly respects him for who he his. At this point, she figures what he doesn’t realize can’t hurt him, but she’s made a mental note (which she won’t forget this time) to avoid this fate for herself.

Regardless, on a personal level, Lulu is super close to her father and a daddy’s girl. He spoiled her with all the lush riches their kingdom had to offer, and the father-daughter pair would even consider each other best friends in a genuine, unironic way. Unlike many other Kings, he was humble enough to play around and entertain his children personally, and would never choose a favorite despite his many kids. He may not be he most respected, but he’s definitely loved, and Lulu contacts him often while in school.

The current Queen of Fairis, Lulu’s mother is a stark contrast from her husband, and was and is an excellent choice for Anne of Austria’s role. A calm but coldly impatient woman who’s at the end of her wits with her own court and husband, she’s hardly affectionate but does retain a semblance of maternal love for her many, many children.

It’s not public knowledge but her affairs continued even after destiny (it was a political marriage, after all), and some of her kids aren’t even Louis’, making them Lulu’s half-siblings.

Being somewhat a child herself, Lulu is excellent with each of her multiple siblings, all of whom are significantly younger than herself. She loves each of them very much and equally so, despite debatable blood relation status.

yes i plan on turning these bullets into proper descriptions

shes the heiress to an absolute french throne. that never bodes well

destined spouse, we all know how this goes

a phenomenal first chapter for eahfansa 2K18 by estella!! 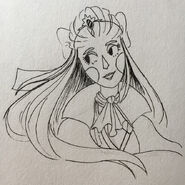 ACTUAL RAY OF SUNSHINE BY PATCH
Add a photo to this gallery
Retrieved from "https://everafterhighfandom.fandom.com/wiki/Loucette_%22Lulu%22_de_Bourbon?oldid=347291"
Community content is available under CC-BY-SA unless otherwise noted.