To own a bakery/tea shop and live happily ever after with Madeline Hatter!

I can make any tea or treat in a snap! I can also transform into a hare and back.

I get this constant urge to break stuff; tea sets, plates, you name it I'll break it!

Chem~myth~stry- I love to make potions and Maddie's my lab partner!

Grimm~nastics- All that hopping makes me dizzy...


Marcia is the Daughter of the March Hare from Alice’s Adventures in Wonderland. She’s a Roybel because she wants to follow her destiny, but she also believes everyone should have a choice.

She can be slightly shy around new people, but she acts crazy around her friends. She’s very affectionate and loyal to those she is close to. This also means that if you break her trust you’ll have a hard time getting it back. This being said she tends to hold grudges. Marcia is a bit naive and tries to see the best in people. She’s crazy & sometimes she hears ‘voices’ in her head. She tends to act before she thinks it through, which usually has consequences. Most people find her irrational & think she’s obnoxious.

She has brown hair with olive green, indigo, and green teal highlights in the front/left braid. It’s usually up in two Pippi Longstockings-type braids. She has fair skin, freckles, hazel eyes, and a pair of Hare's ears. This gives her the ability to hear better than anyone else.

Marcia is one of the younger children in the family. December T. Hare and Augusta Hare are two of her many many siblings. Dec and Marcia get along okay... they're both crazy (all the Hare kids are) but Marcia doesn't exactly approve of her "tea" and "candy" dealing. Marcia still loves Dec though. Auggie and Marcia get along pretty well. They're both crazy, though Auggie has a tendency to push Marcia too hard. Marcia can also tell when her sister's feelings are hurt, (nose twitch is a dead giveaway to it), and will try to cheer her up, whether with tea, a silly song, or a tight hug. The Hares gets along pretty well, but sometimes it can become a bit hectic because there are so many of them. The Hares and the Hatters are really close, so I guess they could count as honorary family members.

Maddie Hatter and Kitty Cheshire are her BFFAs, but she’s friends with all the wonderlandians!

She doesn’t have one.

She doesn't really have any enemies, but most people find her unbearable. She and Bunny Blanc have a kinda rocky friendship though. 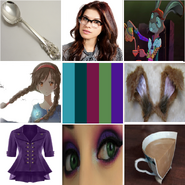 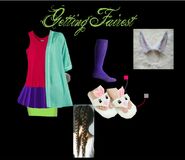 Marcia's PJs
Add a photo to this gallery

P.S. If you have any ideas on how I can perfect my OC, please say so in the comments.

Retrieved from "https://everafterhighfandom.fandom.com/wiki/Marcia_Hare?oldid=292973"
Community content is available under CC-BY-SA unless otherwise noted.