The Spanish Lady, The Wheel Of Fortune, As I was going through London city...amongst other names

It's not an exact science but I'm trying to master the art of cartomancy. It's more about psychology and knowledge of symbolism than it is about actual magic. So I guess my real magic touch is that I have a slick tongue.

I'm not sure I'm ready just yet. It's just that I feel a bit shy when it comes to forming intimate connections, you know?

How should I put this? Erm, I must admit I like how flames twirl and bring warmth, maybe a bit too much. I wouldn't set anything on fire at any time, don't get me wrong but I do suppose it does irk some people when I test my fireworks or discard some of my older sculptures through burning to avoid clutter. I always keep a fire extinguisher at hand, though!

Geogra-fairy. It's good to know about all the wonderful places out there in the big wide world and the stories behind them: how people moved, local natural phenomena...and their effects on such places.

Grimmnastics. The aftermath is what worries me, since my toes don't handle the heat very well. Runs in the family, really!

Keep your friends close and your enemies closer. ;)

Mariposa Lavador is a 2016-introduced and all-around character. She is the granddaughter of the Spanish Lady from the folk song of the same name. Posa aligns with the Neutrals as she has no qualms about her story but isn't passionate about reliving it enough to qualify as a Royal. It is also because she doesn't prefer either side of the alignment conflict over the other. Her mind is not finding the perfect guy or arguing on ones' beliefs but rather it is on traveling the world, capture its wonders through art and inspire others along the way.

She likes doing caricatures because it is a fun way to accentuate what makes each subject unique, not to make them look ugly.

Mariposa is a writer for the entertainment column in the school newpaper. She is an official cartoonist, drawing cartoons relating to each week's hottest news. One of her works include a caricature of Headmaster Milton Grimm, which made headlines on its own. She also designs weekly sudoku boards for each issue.

Mari has olive skin, waist-length black hair that is either put into two long braids or coiled into a bun and dark brown eyes. She often wears a silver peineta comb carved into the shape of a butterfly, a heirloom she was given during Thronecoming. Mariposa is chubby from a relatively pampered life but it doesn't mean she has been a shut in all her life.

In live-action, Mariposa would be played by Gina Rodriguez, known for her role as Jane Villianueva from Jane The Virgin and is the voice actress for Carmen Sandiego in an upcoming Netflix animated series.

Basically an unattractive man finds an attractive woman washing her feet and drying them with coals (alternatively, the lady was doing the washing in candlelight). He spies on her for some time, wandering the streets only to end up in trouble. After being spotted by her, he fails to ever see the girl again and still dreams about her in old ages. In some instances, the man proposes to the woman with material gifts, in which she refuses as she was only interested in him. They get married and lived happily ever after despite their differences.

How Mari comes to it

(will elaborate on the great quest of the last admirer to win the lady of his dreams) The last Spanish Lady accepted the hand of her unusual suitor and they had a daughter. That girl lived life and had hers, too which was when our girl Mari was born.

Posa wears a black cardigan over a white blouse with a monarch butterfly collar.. She has a roulette table skirt with a golden tulle petticoat underneath. Posa has on lace-up socks and peep-toe-shoes. She has a handbag that is made to look like an old fashioned coal iron with an enamel chicken stuck on it. Her hair is put up into a bun, fastened by a silver comb shaped into a butterfly. She also wears red translucent dice earrings. 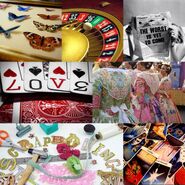 Mari with Sam and Bane.(1st from right to left) 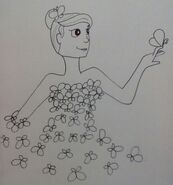 By Sebweh
Add a photo to this gallery
Retrieved from "https://everafterhighfandom.fandom.com/wiki/Mariposa_Lavador?oldid=315388"
Community content is available under CC-BY-SA unless otherwise noted.