Mousie Forest is a 2015 introduced fiction only character. Mousie is the daughter of the princess turned into a mouse from the fairy tale: The Forest Bride. When she graduates she is destined to be cursed by a witch to be permanently stuck in her mouse form until a man willing to love her comes. At first Mousie was eager to live her story and become a fully human girl, making her a doubtless Royal. Despite this, recently she has been beginning to lean on the Rebels side. This is probably due to the fact that her supportive friends have been showing her the she's already just fine the way she is, mouse features and all. Because of this change in preferences Mousie is now classified as a Roybel.

Despite her desire to always be polite, at times she can forget this and be rather nosy. However, she insists that she only appears this way because she can't help but overhear conversations with her sensitive mouse ears as a desperate excuse. Though she is ashamed of this, it is something that seems to happen quite a bit, and she's often caught on it. This usually puts her in a rather flustered and mortified mood for the rest of the day.

Most everyone agrees that Mousie is a cute girl. She's a lot shorter than most with a thin-boned and dainty body build. Her hair is rather thick, long, and wavy, being a rosy light brown in color. Her eyes are an extremely dark brown - almost black - with thick, dark eyelashes that are shorter in comparison to some of the other girls in her school. Her skin is a light and warm shade of cocoa and her petite nose has a pinkish tint. Her lithe hands are a creamy white that fade into brown towards her upper arm, giving the appearance of long gloves. Mousie also has cute mouse ears and brown mouse tail. These mouse traits will go away after she lives out her story.

In her mouse form, Mousie takes the form of a small cocoa-brown forest mouse that is often described as adorable by those who see her. Her front legs and paws have white fur that fade slowly back into the light chocolate color of the rest of her fur, just like in her human form. Her tiny button nose a pastel rose pink and her whiskers are also white. For an accessory she wears a tiny forest green ribbon used as a headband and tied in a bow. Her tail is only a shade lighter than the rest of her coat and is usually curled. Her velvety cupped ears are somewhat large in comparison to most mice in the forest, but no where near large as, say, Madeline Hatter's mouse Earl Grey.

Mousie considers Faline to be one of her very dearest of friends. Mousie always tolerates Faline's outgoing personality with enthusiasm. To be more realistic, Mousie doesn't just tolerate it, she loves it. Both understand what it's like to have an appearance with noticeable animal features, and they are obviously close to one another. Faline loves to cuddle up with her little friend and the two will often play with each other's animal ears.

She is also good friends with Destiny, the blonde and bubbly daughter of Santa Claus. Many people are confused about how Mousie wants her destiny, but also doesn't. Dest, however, seems to understand perfectly, sometimes Mousie appreciates very much. Because she cares about Dest, she does her best to not let anyone hurt the daughter of Santa in any way.

Mousie was perfectly delighted when she found another girl at the school with a mouse-related destiny. She was first saw Sonia because of the mouse ears so similar to her own, which made her feel rather bold. She ended up being the one to introduce herself, something that doesn't happen very often. The two discovered they had similar powers and anthropomorphic abilities, and later bonded over their kind personalities and willingness to protect their other friends, which now included each other.

Mousie is the type to fall in love rather easily, something that has the tendency to go terribly wrong. She has left very subtle hints around her best of friends that she has had a lover in the past before Alak, but refuses to give any more information when her friends understand the hint and press for more information. She doesn't seem to want to talk about it.

It must have been love at first sight when she met Alak, in all honesty. After going on a date they discovered that they both like each other. Since then the two have gone out on multiple dates and are now offically classified as a couple. Sometimes Mousie will secretly worry that she rushed into this relationship and can spend a good amount of time fretting over it. Despite the pain it causes for her, her worrying is another thing that shows how much she cares for her boyfriend, and she would be devastated if she had to lose him.

In animal calling a chickadee came to Mousie, which she named Delight. 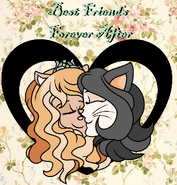 A selfie taken with Faline.

Destiny and Mousie wrapping Christmas presents.|Drawn for Destiny's birthday contest.
Add a photo to this gallery
Retrieved from "https://everafterhighfandom.fandom.com/wiki/Mousie_Forest?oldid=315394"
Community content is available under CC-BY-SA unless otherwise noted.