In an idealistic world perhaps I'd try to restore my family's honour... Of course, my family never had any honour to speak of. However I would still like my revenge on the no-good blackguards who ruined my life.

A seducer-murderer? It's probably a good idea to avoid that relationship.

Nobelle Fox (she/her) is the daughter of Mr Fox. The third member of Reina's clique, Nobelle is the quiet but intimidating muscle of the three. She is a neutral. The fact that she'll be following her story seems very much like an inevitability, and she doesn't really see why her opinion would matter.

Nobelle is a very muted person. She comes off as emotionless, and it's impossible to ever tell what she's thinking. Although her reputation, height and talents make her very intimidating, this is unacknowledged by Nobelle. Rather, she goes through life as if she is invisible, remaining in the background, inactive.

Nobelle isn't someone who thinks a lot. Or, well, she is. Nobelle tends to go through life as an observer, never properly living in the moment. Since she is analytic, she rarely bothers to factor personal emotions and opinions into her thoughts. In fact, trying to do so is tedious to her, since she's not a very emotional person. This makes her very passive.

When it comes to the people she's 'friends' with, Nobelle is quite an obedient person. Not out of any adulation on her end, it's just that she rarely has a reason to disagree. If there was ever something she disagreed with, she wouldn't follow that order. However she hasn't encountered that yet.

She views her own life as quite insignificant. Since she is destined to die, she perceives any and all attention as wasted time on other's parts. The thought is rather amusing to her, she supposes. She expects to be forgotten, and has accepted that. Anyone who acknowledges her is quite an odd person in her eyes, since they seem not to have realised that.

Due to her beliefs, she has become overly accommodating of others. Since everything she cares about will be rendered useless because she herself is so temporary, she tends to relinquish her things to others who indicate that they need or want them, no matter how important they are to her. To her, everyone deserves things more than her.

Nobelle has quite old fashioned beliefs. She believes villainy is in her blood, that her being evil is an inevitability. And naturally, as a woman, her villainy is especially egregious. She has betrayed femininity, and is therefore forbidden from it, lest she besmirch it more. She rarely expresses it, but feminine villains kind of bemuse her.

Her beliefs in her own criminality mean that she claims intimate knowledge of the criminal psyche. She understands what motivates people to evil, and as a consequence is extremely skilled at solving mysteries. To others, she can seem as if she's always one step ahead. To that, she shrugs.

Although Nobelle believes she's naturally drawn to darkness, she's been having a difficult time getting used to the things she's expected to do. Of course, she assumes she'll probably be able to do it come destiny, but until then, Nobelle has a tendency to consume very grim media, as a way to come to grips with it. She's quite a well read person, in general, although she rarely reveals this.

Nobelle is a pretty dark person. If her life is to have any sort of purpose, she has chosen revenge. Revenge against those who torment her family, revenge on debtors, on the privileged elite, and those who hurt her family. This doesn't factor into her daily life much, apart from a distaste for certain other students, but she takes it very seriously nonetheless.

Nobelle writes a lot of very dark and very violent speculative fiction. While people tend to assume it's because she's a twisted person, it's actually a way for her to try and reconcile with the goriest parts of her destiny.

Nobelle likes collecting knives and other weaponry. She likes to keep them clean and sharp, and safely locked in a display case.

Nobelle is quite the pickpocket, and this aspect of her flourishes at Ever After High. She steals, she works part time jobs, she assists Reina's gambling ring, and many other things, all in the name of earning money.

Nobelle has all the skills necessary to becoming an excellent assassin when she's older, and is constantly working on honing them. Even if she doesn't have a reason to use them.

Throughout the years, Mr Fox has gained an almost legendary reputation, as another of London's many boogeymen. The mansion on the outskirts of the city is said to be haunted by countless ghosts of his victims, and Mr Fox himself is said to wander London's east end in search of rich people to seduce away and rob. His mansion is a popular spot to visit for horror fanatics.

His successor Nobelle gains her fair share of attention from tourists too, as she gets sold as part of the narrative. She's grown used to the crowd of onlookers gathered outside her Aunt's modest butcher's shop. A pity they never buy anything. The rumours that they're selling human certainly don't help.

After Mr Fox's death, it was revealed that Lady Mary was pregnant, with him as the father. Although she has never said anything, rumour was that the two were deeply, passionately in love, desperate to defy destiny through a life of pacifism. However the darkness in his soul, and his destiny compelled him otherwise, breaking her heart and causing his death. A tragedy indeed.

Either way she quietly gave birth to the child, handed her off to the destiny authorities, then quietly vanished away from the spotlight.

Nobelle was given to Mr Fox's relative, a butcher in London, and they lived quietly, with her helping at the shop. That is, until a few (ahem) gentlemen came a-calling. Before his death, it seems that Mr Fox had racked up quite a large debt in trying to maintain his lifestyle and 'live it up' before his gory end. That debt passed to her, and she now has to pay it off before her end, otherwise her aunt will be hurt. She began to pickpocket and steal from tourists in the area, exploiting the rumours of Mr Fox's ghost to get away with it. This continued up until the destiny authorities sent her away to Ever After High.

True to her name, Nobelle has a pet fox. Well, if you asked her, it's just an aquaintance, he comes and goes. She hasn't bothered to name him, but she does like feeding him. His tail... is soft.

Nobelle doesn't deem romance feasible for her. Simply put, she doesn't think she is trustworthy enough, and would rather not try, on the chance that a violent side may awaken. Her story has quite a scary precedent to it and she doesn't want to test it. 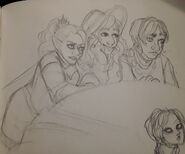 Feat her original design, which was more health goth 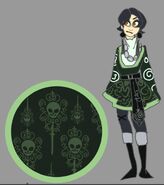 Retrieved from "https://everafterhighfandom.fandom.com/wiki/Nobelle_Fox?oldid=345141"
Community content is available under CC-BY-SA unless otherwise noted.