Teig O'Kane and the Corpse

One of the friendliest people you'll ever meet, Quinn O'Kane is open and honest and gets along with just about anyone. He smiles moving forward, despite the grief in his past, striving to be the best he can be. He honours Destiny to begin with, even aligning as Neutral in the initial conflict. His father's approval is important to him, but he comes to realise that his father won't be mad if he chooses to be selfish and do what he wants instead. His alignment as Rebel stems from the idea that he wants everyone to be able to choose their own paths.

Quinn has incredibly average grades across his classes, with the most notable exceptions being his fails in Wooing 101 and General Villainy - albeit neither are on purpose. He's generally relaxed about his grades, and doesn't stress too much about going above and beyond, and is more than okay with being average.

Lineart for his casualwear by me 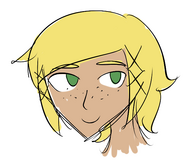 Quick colour sketch by me

O'Kane's name on the doll box made by Spades 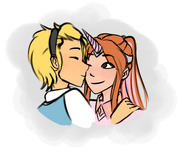 Cute as heck drawing by Patch

The adorable set by Patch

Quinn VS Quinn by Zena
Add a photo to this gallery
Retrieved from "https://everafterhighfandom.fandom.com/wiki/Quinn_O%27Kane?oldid=359593"
Community content is available under CC-BY-SA unless otherwise noted.