Currently in arelationship with Princess Poem

Scarring my friend with her greatest fear, fire. She's not someone you wanna tick off.

Scythe Sasin is an all-around character that was originally a proof of concept.

(Please know that this a major WIP) Upon the initial meeting, Scythe is a dork. An oddball who doesn't understand the difference between a militaristic household setting, and a regular school setting.

In reality, Scythe has no idea how to interact with his peers. But he's a huge nerd, with the capability to go into a major nerd spree at the smallest things. Once he gets going, it's hard to get him to stop.

Overall, what he lacks in charisma, he makes up in sheer awkwardness. Being a massive dork leads to him being super awkward, most of the time it's annoying, but some of the time it can be endearing.

However, he isn't without faults. He can be overconfidant, extremely so. While he remains humble, he overestimates his combat abilities and can get into tough situations.

But he's still easygoing, and rather friendly, despite how awkward and shy he can be. So don't be afraid to approach him.

Towering over most of his friends at six foot five, with blond hair and electric green eyes. He's relatively tanned, with a body built for fighting.

Scythe was the son of the Princess and the Soldier from The Blue Light. When he was a young boy, a revolution in the kingdom overthrew the current royal family, and to protect Scythe, his name was changed to what it is today and he was put up for adoption.

He was adopted by Alice Wonderland, and raised in Wonderland with her. During this time Scythe learned how to fight, and how to survive. He escaped from Wonderland before the curse was placed upon it.

Scythe found a nice clearing in the woods afterwards, and decided to build a home there, and now commutes to Ever After High.

How does Scythe come into it?

Scythe is the next Soldier in The Blue Light, destined to become a soldier for the kingdom that overthrew his family.

Scythe learned and trained in various forms of martial arts and combat. He primarily uses his weapon, an enchanted katana that is as dark as night.

His primary weakness is his lack of ranged offense, and he lacks a lot of power, opting for a speed build over strength.

Scythe is very good with advanced maths, but suffers a lot in language comprehension.

He has a green thumb, often growing his own crops in his garden.

Scythe has no access to magic, but his gear is enchanted. His cloak has an invisibility enchantment that activates when the hood is up, and his gloves hold a runestone that gives the effect of fire magic.

His katana is a special one, enchanted to absorb water-based magic attacks and channel them into enhancing the blade's physical attributes, such as durability or sharpness.

Scythe done by the wonderful Isaacelwwe! 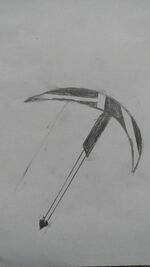 Retrieved from "https://everafterhighfandom.fandom.com/wiki/Scythe_Sasin?oldid=328842"
Community content is available under CC-BY-SA unless otherwise noted.