Start a Wiki
This character is undergoing a major revamp

Sophinx Riddleton [she/her] is the daughter of the Princess and John from The Traveling Companion by Hans Christian Andersen.

I wouldn’t mind putting a halt to my dilly dallying for destiny. After all I’d have had my fun. Can’t say I wouldn’t wish to bring some of it with me.

With my carefully crafted swan cloak, I can do what swan maidens do and much more. I still have to iron out a few kinks here and there.

Can’t you see the ring? I’m taken. Question is, who shall lay claim to it? Who is worthy of my hand? I’m a real life fantasy, so I’m quite used to having admirers a plenty. Though if I must confess, my heart’s gone with the wind.

Rain, rain go away. I don’t want it ruining my hair or sunshiny day. But you know what really rains on my parade? Charmings and the like. There's only two reasons a Charming would be here. Money or a role. Often both.

Don’t get me started on

You’ll love her or hate her, usually both. Sophinx is equal parts a well mannered princess and a ruthless villain. Neither is a cover for the other. She incites enough fear to scare off peering eyes while maintaining grace and intrigue. Sophinx is as admirable as she is terrifying.

Part of what makes Sophinx so terrifying is her authenticity. Like her human based memorabilia, she does not need to fake it when she already has real material to work with. Sophinx does not lie when she gleefully elaborates on her future plans, all in bloody, gut-wrenching detail. (The parts she would disclose to her suitors, at least.) She has a strong attention to detail and ensures that even the subtlest things work to her advantage.

Sophinx is confident about herself and her abilities so she proudly shows off her assets in many ways, from sporting over the top get ups and an outspoken personality to working hard in school and actively participating in hextra curricular activities. The reason why she isn’t exhausted by all of this is because she’s always passionate about everything she does.

Her many talents and relatively obscure tale allow Sophinx to blend into many crowds. She’s a social butterfly, fluttering between groups while gathering intel. Sophinx is observant. Sometimes she even carries along a small notebook to put down her findings, which she openly admits to but only by saying it’s for general memos (and plant doodles).

Her illusion relies on the assumption that Sophinx leaves nothing to the imagination. Some fellow villains see this as either a lack of foresight or shallowness. Others think she’s trying too hard. Being sorely underestimated is exactly what she tries to achieve. If people think that’s all there is to her, they would not even consider figuring her out. Truth be told, they couldn’t be more wrong.

Sophinx commands attention. She intentionally plays up aspects of herself that benefit her public image to direct attention away from the ones that don’t. It’s not that she thinks these other interests are flaws that need to be suppressed but she feels they’d either make her persona less effective or she’d face judgement for them.

Sophinx is protective of her identity and fully controls how to present herself. She does not care to appeal to her peers or any standards but her own. Sophinx would go to great lengths to get what she wants.

Much like her hand, Sophinx's respect must be earned. By default, she adopts a neutral stance and would not act unless provoked. Sophinx does not see any benefit in bullying people and finds such acts of aggression beneath her. Most of her collaborations are for business reasons only and hence are temporary. 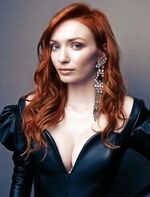 Sophinx is radiant. But just like radiation, something’s a bit off. Her deep red hair is tipped off with neon green, like the elusive green flash on a blood red sky at dawn. Her eyes are blue and pink, glowing like the flame of a Bunsen burner. If it weren’t for her rosy cheeks and eyelids, Sophinx would look as pale as death.

When Sophinx is embarrassed, her face blushes so much it slowly turns red as blood. This was a trait she inherited from her father. She’s a bit conscious about it since it ruins her cold calculating visage. She tries her best not to let it show, so instances of it are very rare.

In public, Sophinx can never be caught dead with out the signet ring bearing her family’s seal. It’s not merely an accessory but a tool and a symbol of power. With a band made of braided human hair collected from one of her mother’s victims and her family’s royal seal carved into the head, it is best remembered as the culprit behind Sophinx’s firm and sometimes agonizing handshakes. Often the princess would apologize for the inconvenience. Nonetheless it was an intentional power move. She also uses the ring to seal letters and documents with wax. True to its purpose and its wearer, the ring leaves a lasting impression.

Sophinx likes combining function with fashion. These interests arose from the need for storage of items and information.

Any princess born into a reputable family can relate to the sheer amount of love letters and flowers from hopeful suitors flooding their doors and mailboxes. Sophinx was no exception. She just has her own unique way of dealing with them. While many choose to ignore the cheesy letters altogether, Sophinx dissects them for information then recycles whatever materials are left. Once she's finished reading, Sophinx would collect the broken wax bits to reuse for her own seals and uses the paper for scrapbooking. There's a certain charm to emotionally handwritten texts that a commercially available calligraphy print could never hold a candle to. The flowers she receives are used as subjects for painting or pressed for scrapbook and shadowbox decoration.

How does Sophinx come into it?

Sophinx holds disdain for the many Charming branches and other filler royal families, particularly their sons. In her eyes, they are no more than rabbits - breeding excessively, hogging resources and being all around invasive. What is more, they're glorified rodents whose faces are plastered on merchandise and are held up as symbols of goodness. Her feelings are mixed in regards to destiny-bound princes. On the one hand, they’d be expected to be exemplary members of society. On the other hand, these princes are likely trying to leach off the power of whatever royal family they marry into, which is a goal shared by their less fortunate leftover siblings.

She has more sympathy for Charming princesses who are most likely relegated to becoming political bargains and royal baby makers. Those with exceptional beauty have a chance to be immortalized as cover girls and in portraiture but most face the fact their existence will be lost to time.

Sophinx is aware that most of the princes vying for her attention were arranged to die at her hands by their parents who have grown frustrated with their spending habits and lack of talent compared to their destiny-bound siblings. If they couldn't be useful in life, Sophinx will put them to use in death.

Since the Legacy Day drama, there has been an influx of hopefuls to her door who hope that with destiny becoming more flexible than ever, Sophinx would be more willing to give them a chance. In reality, her stance has remained unchanged even after the destruction of the Storybook of Legends. It seems that Sophinx has been floating above the destiny conflict, unfazed by the fact she never signed the real book. She doesn't need the real deal, Sophinx only ever needed something she can convince others it is real. If she can't, Sophinx would just direct attention elsewhere.

Seeds have been sewn for a change of heart, but that doesn’t mean Sophinx is ready to change her mind.

Thaumar was assigned as Sophinx’s destined magician. He acts as her assistant when doing experiments. They’re lab partners in Science and Sorcery and help each other out with homework. She considers him her brother from another mother.

Her hand in marriage is supposedly open for the taking. In reality, it is already planned that she would be assigned with a John who would be selected near the end of her executions to ensure his absolute cluelessness. Therefore, Sophinx’s doors to dating have remained shut. While she has admirers aplenty and continues to gain them through public appearances such as balls, parades and even school events, she has never accepted their advances or gone out with a single one. Sophinx gives vague responses to her potential suitors so as to draw them in while still keeping distance. She has no interest in breaking hearts since Sophinx does not want to create enemies.

Retrieved from "https://everafterhighfandom.fandom.com/wiki/Sophinx_Riddleton?oldid=357101"
Community content is available under CC-BY-SA unless otherwise noted.