The Manhunt is a multi-chapter fanfiction written by DatAsymptote. It was originally written as a fifteen-chapter work for Camp Nanowrimo April 2017, and is the author's first successful attempt at a Nano month.

The fic features Bastion Fanfarinet and Airmid Valerian, and focuses on how the short-lived brOTP of Fanfarinet 451 goes on a roadtrip in attempts to hunt down more information on their predecessors – and perhaps, even a method of escaping their destiny.

"People don't like talking about the past. They prefer repeating it."

Bastion Fanfarinet fears the future. He was supposed to follow the path of his villainous uncle, until that destiny had been taken away from him. To him, there is nothing more terrifying than the new unknowability of his life.

His scientifically-minded acquaintance, Airmid Valerian, insists that gaps in knowledge are merely a derisive challenge. Strive to push the edge of uncertainty, they say. Strive to better yourself in the process.

No one likes to talk about the previous Ambassador Fanfarinet, and the last Death's physician – Airmid's predecessor – has been practically vapourised from all records.

With no adult there to offer guidance, the two decide to take matters in their own hands. The plan? Journey through France and Germany, and hunt down whatever little information there is about the two men.

Divided in 18 chapters, none of which have particularly catchy titles.

Drawn for the Two-Year Anniversary of Manhunt 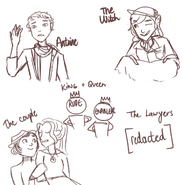 Side Characters of The Manhunt, drawn for the Two-Year Anniversary
Add a photo to this gallery
Retrieved from "https://everafterhighfandom.fandom.com/wiki/The_Manhunt?oldid=313935"
Community content is available under CC-BY-SA unless otherwise noted.