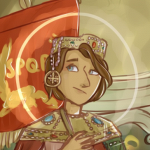 Icarus Juniper, son of the brother in the Juniper Tree

With his compelling voice and piano skills that he breaks out when he can, Icarus Juniper is not an unfamiliar name around Ever After High. The upperclassman is known for his "older brother energy", and many a student find him a comforting voice to go to.

Mark Juniper, son of Marlinchen in the Juniper Tree

Most people know Mark as "Mini Juniper", Icarus' young and shy brother. With his sick baking skills and even sicker skateboarding, Mark is the sort of boy who can turn any house into a home. To face such a gory destiny, Mark believes, you can only practise kindness.

Airmid Valerian, the next physician in Godfather Death

Airmid aims to embody the ideals behind science and medicine, but that's difficult when your story tells you to break the Hippocratic Oath. Is that going to stop him from doing university-level research, from educating others, and trying to be the greatest he can be? I think not.

Pythia Adalinda, daughter of the Serpent Queen in the Singing Springing Lark

Pythia Adalinda is a face and name you would recognise from Royal Student Council. Despite being an antagonist, Pythia holds a positive reputation at Ever After High. Commonly, you'd find her asking you to sign her petitions, putting up posters, and upholding a system that convinces you that you're doing good.

The next Goose Girl is destined to keep quiet, but Radiant is not one to withhold truth. She is honest and witty, dedicated to giving herself a voice. You probably know her as the current Editor-in-Chief of the Knightly Knews, or from her spelltacular skills in Unicorn Polo or Equestrian.

Go down to the basement where the villains hang out, and you'd find Raider. He looks so out of place, with his quiet demeanor and his persistence in "refusing to be a villain". A self-professed IT guy, Raider is dedicated to offering his computer skills to any villains in need.

Klara Spejl, daughter of Kai in the Snow Queen

I have discovered a truly remarkable description of Klara Spejl that this box is too small to contain. In nature, in ice hockey, in everything she loves, Klara is one to find mathematical beauty everywhere. She is friendly, in love with the universe, so she lives in fear of that mirror shard that will make her feel only hate.

You would recognise the Swedish Nightingale anywhere by his honey-sweet voice, but his face, to most people, is elusive. Lindel Song likes to joke that he's only made for radio - and it's radio that he does: broadcasting his voice on Ever After High's specific channel.

Dentori KIGO-575 (Key Instrumentation Galen Operation), the next Mechanical Nightingale in the Nightingale

The Dentori KIGO-575 is the future. Created by a team of incredible engineers down in Tokyo, KIGO was invented to be the greatest diplomatic gift from the Emperor of Japan to the Emperor of China. You can find him in either bird form or human form - they communicate to each other (and to the engineers) via cloud technology.

Depending how you met Sage, there are two different things you can say. Is he the organised, dedicated "Theatre dad", whose passion for Musical Theatre leads to some of the greatest shows in the school? Or is he the sketchy conspiracy theorist, with his blog and gas mask and strange ideas?

Hero Sea. Sandersen, daughter of the eldest sister in The Little Mermaid

Look at her name, and you'd think she's HC Andersen reborn. Hero Sea. might as well be - she's every inch the dramatic, bisexual ballet dancer with a love for words that Andersen was. And, like Andersen, she yearns... for a destiny that is not hers: Meeshell's role as the next Little Mermaid.

Lively Charming, the next Temple Girl in The Little Mermaid

The next Temple Girl might worship Poseidon devoutly, but I wouldn't be surprised if you mistook her as a follower of Dionysus. Lively Charming is one to show up for all the good parties, and wants to keep partying. A royal wedding, she believes, will only cut short her youth.

Turnus Wyllt, the next King Merlin's son in the Princess Mayblossom

Turnus Wyllt's name is recognisable as the prince who runs Veritas, a blog dedicated towards discussing the bureaucracy of the fairytale world. He is more than that: witty, maths-inclined, and a tabletop nerd. While Turnus has no intentions of fulfilling destiny, he is open about why he wants to stay at Ever After High: to take advantage of the opportunities here to suceed.

Orleans le Nouveau, the next King of the Gold Mines in the Yellow Dwarf

If you cracked open a textbook and looked at the definition for a fairytale prince, then Orleans le Nouveau would be right there. Skilled in swordwork, in poetry, in being distressed and carried by damsels, Orleans does things by the book... even if it involves self-sacrifice. Commonly, you will find him at parties with his fellow princes.

Gladiolus Palms, the next mermaid in the Yellow Dwarf

If one could put the word "bro" on a mermaid, then Gladiolus Palms would be it. Impossibly friendly and helpful, Gladiolus is always here to lend an ear or volunteer to help. You will usually see him doing community service or at the gym. Strike up small talk, though be warned, Gladiolus' sense of morality is very simplistic.

Miraculeuse Cordelear, daughter of Merveilleuse in the Ram / the Wonderful Sheep

Going by Dee, Miraculeuse Cordelear is elusive: one to avoid big crowds and to hide in the shadows and read her Shakespeare. She does not seek to disturb anyone, and will hide her true thoughts with white lies. This is her own rebellion, against the sincerity that her mother's role demands.

Ramsey Baartholomew, the next King Ram in the Ram / the Wonderful Sheep.

Once a Baron's son, but now the next King of Sheep and Ghosts, Ramsey will do whatever it takes to prove that he's worthy of his role and place at Ever After High. Alas, this is sometimes in the form of doing too much for others. He's destined to die young, and with this habit, he's losing his own time: time to be introspective and figure who he really is.

Sensitive, dream-like and soft, this King Arthur doesn't appear to be a stereotypical King Arthur, with his tendency to dress in pyjamas or sweatpants, and his insistence that "self-care" can defeat even the most malicious of enemies. Bernard Pendragon likes to hide behind facemasks and fresh baking -- this boy fears confrontation, whether it be others or at his own issues.

Fresh out of the Welsh Woods, Parker is new to Ever After High. He'd never heard of horses or knights or fairytales before recently, but is earnest to take over his father's legacy, and become an even greater man than him. His naivety can get him in a lot of problems, but the lad is perpetually pure and always dedicated to chivalrous causes.

Eleanor Shalott, the next Lady of Shalott from Arthurian Legends

Eleanor Shalott, being a tower princess, is used to being alone. Thankfully, isolation is a lot easier with the advent of the internet, and she is one to lose herself in echo chambers. A self-professed hacktivist, Eleanor is a staunch environmentalist with a love of boating who lives in fear of deforestation in these modern times.

Ablative Charming grew up being told that she would never be worthy. The Storybook then told her that she was meant to die. But Ablative Charming only knows perspiration, she only knows how to exert herself. With her sword skills and pretty speeches, she isn't here to perish like her predecessors, she's here to put her name down in song.

Destined to be "God's Greatest Scholar", Franz is meant to be academic and driven and every inch the tired professor. Burdened by his future of knowing so much that he becomes bored, Franz is overwhelmed: how can this world ever become dull to him? You'd usually see him buried in books, trying to retain his love for knowledge.

Ruinous Charming (Varius Ruinosus Caeruleus), the next Guenever from A Connecticut Yankee in King Arthur's Court

Ruinous keeps his face hidden behind an hexpensive camera; the prince is known mostly for his skills in photography. Why this hobby? Ruinous would answer that he's here to preserve the present. He wants to remember it until he inevitably has to follow his destiny, and get sent back to a mimic of the 6th century.

Absolute Charming is one to compensate. She is biting, snobby and acts too good for anyone - a defense mechanism, for she knows her role is to be The Other Woman in whatever fairytale she is dealt. The grand visions she has, those noble goals? All a front. Let her dream while she can.

Punny and pugnacious... punnacious? Either way, Kristan Tell is a young boy with riots in his heart, who only knows how to sing about revolution. Skilled with a bow -- both in the arrows sense and the violin sense, Kristan is a true believer in the power of music, though he has no fears in throwing the occasional fist. Meet him in the pit -- the mosh pit or the orchestra pit, context depending.

There are characters who have a role in a story, but are not currently students at Ever After High.

Retrieved from "https://everafterhighfandom.fandom.com/wiki/User:DatAsymptote?oldid=355442"
Community content is available under CC-BY-SA unless otherwise noted.