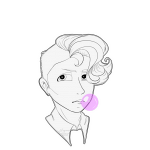 My deviantART account: http://rai-knightshade.deviantart.com/ (no longer active, more of an archive than anything else)

My Archive of Our Own Page: Rai_Knightshade (directly links to all fics I've posted for Ever After High so y'all can get right to the good stuff, though I've also written for Macgyver; all completely SFW, though some bookmarks for other writers' works may be NSFW, so tread cautiously if you're looking for fic recs!)

My Tumblrs: Rai-Knightshade (warning for semi-nsfw text but pretty much no nsfw images outside of those meant to inform) | Rai-Knightshade-Art (Art only blog, entirely sfw; currently the home of the Bradyverse)

Fandoms I'm in include: MACGYVER, My Little Pony: Friendship is Magic, Ever After High, Star Wars, SHADOWHUNTERS, Star vs the Forces of Evil, Kingdom Hearts

~Blondie Lockes (Enchanted Picnic, bought off of my younger sister ^^;)

~Emoji-themed Draculaura (I caved, I wasn't going to get her because of the distinct lack of joints but her shoes and outfit are just so cute!)

~Reboot Draculaura (I think they pulled her out of the back recesses of the warehouse at my local Walmart because she was the only doll of her kind/line I saw and her hair is already full of glue, marking her as an older doll. She's actually pretty cute though and her only issue besides the glue is her lack of joints in her arms. Luckily she has bendable knees though.)

~Lorna McNessie (Monster Exchange Program, bought because she was on sale on Amazon and I loved her design.)

~Numerous amounts of Barbies including my very own Made to Move rock climber. (currently on a quest to find ALL THE MTM'S. ALL OF THEM.)

~Star Wars: Forces of Destiny Endor Leia (She was on discount at Walmart and I POUNCED. Girl comes with articulation everywhere but at the ankles--though her head can only swivel--as well as two CLOTH outfits, several accessories, a flocked Wicket the Ewok who can move his arms and legs, and a belt holster containing an ACTUAL REMOVABLE BLASTER.  And she was cheaper than the Leia set that only came with one plastic/partially molded outfit and an R2D2!!! I was in heaven istg.)

~Hunterx2, bought off Ebay; one came with the full outfit for the most part and the other came partially clothed; both are meant for Arion customs!

~Briar Beauty, bought off Ebay; came almost fully clothed but missing a shoe and possibly some small accessories; meant for a Rose custom!

~Carnival Date (I think?) Alistair Wonderland, bought off Ebay; came I think fully clothed but without some accessories; meant for an Anteros custom!

~Poppy O'Hair, bought off of Ebay

~A basic line Apple, not sure which one

~Reboot basic Cleo DeNile (bought cause I wanted to try customizing on her face, if I can get a body for her I'll make her into Venetia)

~Freaky Fusions Operetta (slightly customized, a gift for a friend. I painted her shoes and bought new clothes for her!)

~Literally any C.A. Cupid doll I can get my hands on tbh, I have most of her Monster High outfit but I want the doll to go with it

~Darling's Dragon Games doll (I'd say any Darling doll but I'm not a fan of her budget dolls. Just.... eeeewwwwwwwwwwwwwwww.)

~The Back-to-School dolls (excluding Darling's because I'm really not a fan of that outfit. and hair. The only thing I'd use it for is as a repaint doll.)

~The other Enchanted Picnic doll (I think I just have to get Cerise right? Might as well complete the collection then, although I kinda want to try my hand at remaking a doll using the Raven one....)

~Meeshell's doll(s) (partly because she's admittedly super cute, partially because I want to sew her a new skirt. The webisode version is cute, the doll version.... not so much.)

Ever After High Characters that I've actually created:

~Rose de Beauté, Daughter of Beauty and the Beast, destined to be Beauty. Rebel, Third Year

~Arion Neptune, Son of The Little Mermaid, destined to be the Mermaid. Rebel, Third Year

~Andre Fairchild, Son of The Imp Prince, destined to be the Imp Prince. Rebel, Third Year

~Venetia Soulsong, destined to be Psyche in Psyche and Cupid. Roybel, Second Year

The Cryptids (they only take night classes and have never actually been seen; the only proof of their existence is an extremely faded portrait of the three. some aren't even sure they exist.)

~Miriam Stallbam, Daughter of Marie and the Nutcracker, destined to be the next Marie. Roybel (was previously named Maria), Third Year

~Flinnigan Stallbam, Son of Marie and the Nutcracker, destined to be the next Fritz. Roybel, 10 Years Old

Class of Classics (namely just the parents of Arion):

-Aeolus Neptune, Son of the Prince from The Little Mermaid. Arion's Father, King of Underwater Kingdom

-Peirene, 2nd Daughter of The Sea King, played the part of the Temple Girl. Arion's Aunt/Step-Mother, Queen of Underwater Kingdom

Ever After High: Next Generation:

~Amarante Rozenn de Beaute-Fairchild, daughter of Rose and Andre, part of the saying "A bird in the hand is worth two in the bush." Post-Destiny Conflict, First Year

~Sephora Marguerite de Beaute-Fairchild, daughter of Rose and Andre, part of the saying "A bird in the hand is worth two in the bush." Post- Destiny Conflict, First Year

Mac Ever After Original Characters:

At The Nutcracker Ballet (Doll Assortment)

Swim Date (Arion and Anteros go on a date at the pool. That's it that's the story.)

Mac Ever After (the self indulgent MacgyverxEver After High crossover where Angus Macgyver is a teacher at EAH who teaches my characters and also has a son and did I mention it was self indulgent??)

Heart and Soul (Venetia and Cupid's Story, set to come out... at some point. probably. when I get around to writing it)

Unnamed Circe-centric Sea Glass Side Story (Circe's adventures in the political upheaval of the underwater kingdom, to be written sometime after Sea Glass is finished. or possibly in breaks as I write Sea Glass. who knows, really.)

Unnamed Rose-centric Sea Glass Side Story (Rose's adventures in trying-and failing-not to cause an international incident, to be written probably around the same time as Circe's story, though where Circe's story could be developed into a full-fledged sequel story this would truly just be a side story)

The actual Fanfic Version of Underwater Enchantment (because it will eventually be an actual story I swear. probably.)

Ever After High: The Story of Royals, Rebels, and Everyone Inbetween (aka the full, overarching storyline of all my characters set up to follow EAH's canon storyline but with key differences, probably set up as individual webisode-fanfics. disclaimer: this may never actually be written as much as I'd like to tell everyone the story of how my characters' pocket universe storyline plays out in my head. If it IS written, however, it'll be after the whole Sea Glass thing)

Sea Glass (aka the-unnamed-original-story-featuring-the-main-crew-that's-a-mashup-of-the-little-mermaid-and-cinderella-and-is-essentially-Twisted-Fairytales-but-Gayer, has been partially planned through one of the smaller NaNoWriMo months but has been on the backburner since. cause breakdowns.)

Notes about my EAH OC's:

I have planned my stories to coincide with Ever After High canon from the episode up to Spring Unsprung. My Fanon diverges from canon just before the arrival of the canon daughter of Beauty and the Beast (though Faybelle may exist, and Darling was mentioned in the book so she definitely exists), because I created Rose before learning any concrete info on Rosabella. My Fanon also does not include the canon Sea Witch's daughter because I'm following Webisode canon not book canon. I am also operating on the idea that the faiytale stories have been around for a while, and that there have been several generations of retellings for each story. E.G., Apple White is not strictly the daughter of the original Snow White, but is instead the child of the previous Snow White. I use this logic to explain the origins of my Little Mermaid child, Arion.

And that's it! Feel free to comment, ask me stuff, make fanart of my characters, etc. Just don't steal them; stealing is wrong.

Retrieved from "https://everafterhighfandom.fandom.com/wiki/User:Rai-Knightshade?oldid=333311"
Community content is available under CC-BY-SA unless otherwise noted.