Veritas Virumque is a multi-chapter fanfiction written by Zena. Divided into three parts, it features Turnus Wyllt's investigation of the world of Ever After, when he experiences a few fairytale discrepancies in his own life.

Turnus Wyllt finally meets the man who will call him “my liege”. The man is already out of Ever After High, his name is Gabriel, and he has a job and pays taxes.

But Turnus has a memory of someone else: someone his age, with pink hair and an unfathomable smile. No one else around him seems to show any care or concern for this “Bastion Fanfarinet”, neither will anyone acknowledge his existence. It’s as if someone had took a scalpel and spliced him out of the world.

You can cut and cut away at something until it’s all gone, but scars will still be left behind. There are too many scars in the World of Ever After to deny the once-existence of Bastion Fanfarinet, too many remnants of his presence.

With his love for high-fantasy worldbuilding and peculiar ways of understanding reality with mathemagics, Turnus Wyllt is set on one thing: this discrepancy is the only thing at Ever After High that has truly piqued his curiosity, and he’ll be damned if he doesn’t get to the bottom of it. 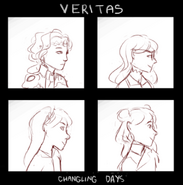 ignore the misspelling
Add a photo to this gallery

Retrieved from "https://everafterhighfandom.fandom.com/wiki/Veritas_Virumque?oldid=338592"
Community content is available under CC-BY-SA unless otherwise noted.