The Three Musketeers (and other d'Artagnan Romances)

To have a better role in my story. I'm one of the three musketeers. Not comic relief.

I'm armed to the tooth. What can't I do with crapton of weapons?

Some people say I always go all out in everything. When will that ever be a bad thing? When?!

Hero Training. Debate. Wooing. I'm into a lot of my classes.

Grimmnastics. Coach doesn't think I can go head to crown with those knights and princes. Let's see which one of us can really backflip.

Athena de la Fere is my sister from my secret fourth mother, but all the Muskeedorks are my friends till the end.

My mother's paella is a recipe worth fighting for.

Baroness Vivienne du Vallon [she/her] is a 2017-introduced and all-around character. She is the daughter of Porthos from the Alexandre Dumas story The Three Musketeers. Like her father before her, she's boisterous, charming and loyal to a fault. She is also known to be incredibly obscene at times, very frequently.

In the destiny conflict, she aligns as a Roybel, and closely leans more to the Rebel side than the Royal. While she loves her papa and his story, she wants to be recognized for her role in the story, not as comic relief.

Vivienne is born to handle weapons with expertise. She is talented in the use of swords, specifically rapiers, but doesn't prefer this mode of fighting. If anything, she considers the sword she carries to be "decorative." Her style of swordfighting is much like fencing, but with less thrusts and lunges and more jumps and slashes. She barely deflects any attacks either, and just uses her agility to dodge attacks. Vivienne believes that a good offense is a good defense.

She is, by far, much better with guns. Growing up half the time with a wide expanse of land in the vineyard, it was all a very big shooting range. Though trained with muskets and skilled with snipers (gotta use that big land space somehow), Vivienne prefers to wield a pair of flintlock pistols. Since her guns aren't allowed in some places, Vivienne trades it off for some Nerf Blasters and foam bullets instead.

When Vivienne was young, she used to wear one of her mother's heels and run around and jump off of stuff. Now, she can sprint in stilettos and even do some backflips without any hindrance. Vivienne can go through hell and back while wearing high heels without any trouble. This, she believes, is her greatest talent.

Vivienne is described to be a pretty girl with sweet and innocent features, one of the many things she had inherited from her mother. She has freckled brown skin, tanned from days working with her mothers at their vineyard. Her body build is lean but muscled, made for flexibility and agility.

Her hair is short and curly, but somehow always manages to look its best. Vivienne has, in fact, never had a bad hair day. Her hair volume varies in every drawing, but its length is always somewhere above her shoulders. Her eyes are a dark brown.

How Does Vivienne Come Into It?

Vivienne was born from last generation's Porthos du Vallon and a would-be doctor who was in Spain studying medicine. A year or so after graduating, Vivienne's mother started practicing medicine in Girona, Porthos went on some crazy event (it's unsure if it was a party or a mission. he was drunk for most of it.) and got an accident there. They met in the hospital and Porthos stayed in Girona long after his recovery.

The romance lasted less than a summer then he went to go back to Paris. In around three months, Vivienne's mother got into the dating game not knowing she was pregnant. In France, Porthos had started courting Amelia Quincampoix, the widow of a lawyer.

Eventually her parents came to the agreement that they'd share custody of Vivienne.

Vivienne is very okay with her destiny, though she'd rather not be comic relief at all. She's aligned as Roybel for her view on destiny, for which she'd have been Rebel if not for her father's noble status. She also leans toward the Rebel side solely because she's French.

Unlike most fairytales, Vivienne's local family is already as extended as it is. As a child, she was switched between her parents' homes in Fairis and La Rioja every three months until her 9th birthday, where they asked her who she wanted to stay with. Vivienne shrugged and said "both." The agreement became a regular thing.

While they don't get their own section, Vivienne is close to her maternal grandparents and visited them in Puerto Story-co as a child. Vivienne was eight when her grandmother passed away. It was the longest time she ever stayed with her mother.

Vivienne's father is on the few Porthos' of history that managed to avoid dying on Belle-Isle. It involved a lot of parkour, more than one controlled explosion and a swan dive into the water. At least, that was the story he liked to tell his daughter.

He is a fun-loving man, who loves his family dearly just a bit more than he loves his friends. Appearance-wise, Vivienne may look like her mother but she's just her dad deep inside.

As far as we are all concerned, she appears to have a thing for extroverted or wild personalities. People call her Cami. Though born and raised in Puerto Story-co, she left for Spain to study and stayed for love.

She is a doctor, with natural maternal instincts. She is protective of her daughter, and was always the person to hunt after her when Vivi got lost in the vineyards.

Amelie, as she is called, is Porthos' current wife. She is a typical mother and wife, and the main source of stability in Porthos' life and also in Vivienne's. She loves Vivienne like her own.

Amelie is a master baker, as Viv would say, and always packs treats when Viv would go to Spain. Since coming to Ever After High, Amelie had instead packed her special recipes. Vivienne hasn't touched them because she's really bad at baking. (She'd give them to Ginger Breadhouse, but it seems like they're recipes of the secret family heirloom type.)

Dani is her mother's partner. Vivienne treats her like a third mother. Dani owns a vineyard and winery in La Rioja, or the Spanish wine region. She has a Belgian malinois named Espa, a name chosen by Vivienne when she was a child.

She sends Vivienne videos of the vineyard and their dog Espa almost everyday now that Viv is in Ever After High. She did the same thing when Vivienne was in Fairis.

Dani and Vivienne are usually on a first-name basis, but Dani always cries whenever Viv calls her "mom."

Matéo du Vallon is Vivi's little brother by eight years. The ten-year-old greatly looks up to his musketeer uncles, and sometimes also his sister, and has repeatedly asked and pushed his parents to get him fencing lessons.

While Viv loves him dearly even when she only gets to be with him every other week, she also loves never giving him a straight answer and babying him to no end.

Vivienne's little half-sister is eight-year old Corinne. Though she doesn't actually dream to be a musketeer like her father, or her sister, Corinne is growing well in the world of gymnastics.

As a child, Corinne loved climbing on her sister's back and running down the stairs with her.

Many of her friends are those she grew up with, as they are the ones who could tolerate her long term.

Lulu and Vivienne have a lot of history and go way back, friends since childhood. Given their noble status, with Lulu as a monarch and Vivienne as the first recognized child of the Baron du Vallon (and, in extension of noble Muskeedorks, the Countess Athena de la Fere), there were a lot of dinners and parties with just the few of them.

Vivienne is fiercely protective of Lulu, considering the princess to be much like a little sister despite being the same age. When they were young, Lulu would wait at the train station with all her bodyguards, every week waiting for Viv to return from her regular visits to her mother in Spain. Then they'd ride to the palace and have a little tea party. King Louis had to replace Lulu's porcelain set with a plastic one because Vivi used to knock the cups over all the time.

Victoire is metaphorically the brains to Vivienne's brawns. Plus, Vivienne is always somewhere close to Victoire, just in case something happens and Viv needs to be there to protect her.

Athena and Vivienne are almost like soulmates/sisters. They may as well be twins. They always happen to come up with the same ideas and it isn't surprising when they finish each other's sentences. Athena and Vivi are like the best of best friends. Also, they probably share clothes. Vivienne has appropriated about half of Athena's closet by now.

Anne and Viv have been close as kids, especially since it was Uncle Aramis who led sword practice classes. The two little girls would take their father's guns and weapons out a lot and roam the streets of Paris. Additionally, Anne and her relationship with Destiny remind Vivienne much of her mothers in Spain.

Vivienne is a notably terrible influence on the youngest R Charming, not that it makes anything worse (or better, for that matter). Renegade is usually left under Vivienne's watchful eyes while the princess' brother, Revolt, is out with other notable Muskeedorks such as Mordaunt and Signe de Winter. Vivienne is a glorified babysitter. She might be a terrible influence, but you can always count on her to keep an eye on people.

Marites is completely incapable of physical feeling, so you know what that means! Vivienne would always try to catch Mari off-guard in the hallways and deliver a calculated punch. Usually, with Mari, a punch just means saying "Du Vallon, stop it."

Vivienne and Kennedy are rather close. They're largely friends with benefits, but they do like to focus on the 'friend' part more -- but the benefits happen to be very good. Kennedy and Viv are pretty much down for anything with each other. Kennedy and Vivienne also work as wingmen for each other, way too often actually.

From the animal summoning activity: Vivienne has a pet occamy named Lucio (lü-'choh) who complements her warm color scheme. Lucio is about as aggressive as Vivi, but is a gigantic softie around her. Vivienne uses him as a pillow sometimes.

Daniela's dog Espa is also considered to be Vivienne's as well. Espa is short for espada, meaning sword. Vivienne also has a horse, an Andalusian named Rosa.

Like her father, she's an excellent flirt. She can use this ability to her advantage, as she has little informants around Ever After who she managed to flirt into her pocket. She identifies as pansexual.

Émilien has so far shown all traits befitting a son of d'Artagnan, and a bit of a bratty side. (None of Vivi's younger siblings are like this.) Vivienne can't help but be suspicious of Victoire's little brother. If they're ever in the same area, you can see them skirt around each other with Vivienne's hand on a knife or a pistol. 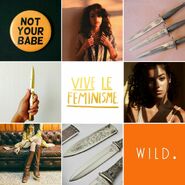 redesign by golden gossip
Add a photo to this gallery
Retrieved from "https://everafterhighfandom.fandom.com/wiki/Vivienne_du_Vallon?oldid=333090"
Community content is available under CC-BY-SA unless otherwise noted.